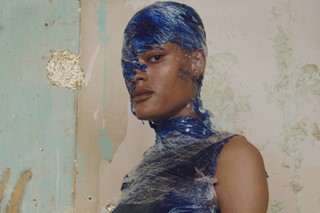 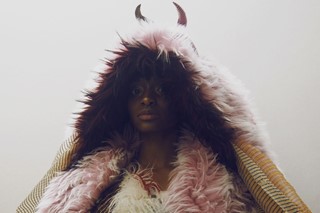 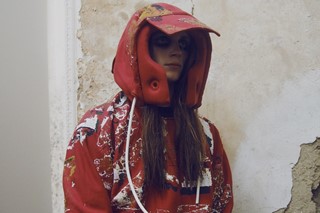 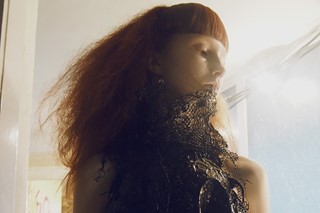 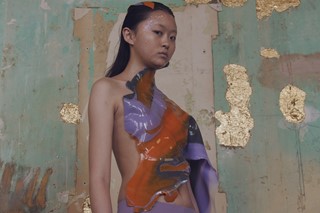 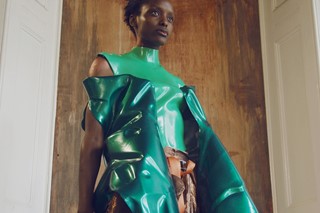 The faded grandeur of Lancaster Gate’s Averard Hotel initially seemed an unusual backdrop for this week’s Royal College of Art Graduate show. But, as guests arrived to discover the space, the setting began to make perfect sense. The Averard is in a state of transition; it has been stripped and gutted of its original splendour, leaving an empty shell that now plays host to temporary exhibitions and performance art projects.

A similar sense of renovation runs through London’s Royal College of Art, an institution founded in 1837 which, despite numerous relocations, remains one of the world’s leading schools in art and design. Zowie Broach is the woman behind the school’s forward-thinking makeover; since taking over RCA’s Fashion Programme back in 2014, she has worked to reinvent and redefine the way that her students think about fashion.

This progressive mentality was evident in last night’s show, the first in 20 years to be staged away from the College’s Kensington campus. Formulaic attitudes to runway presentation were dismissed in favour of an elaborate performance spanning two floors, choreographed by Joe Moran. Designers were presented with the difficult task of choosing one sole look to display – a decision which, Moran says, “afforded the choreographic opportunity to create a fully-realised, individual world for each collection”. The show had no running order. Instead, journalists had to look out for a number attached to each model which revealed the designer of their outfit; a clever detail which forced all attention on the garments and ensured that no time was wasted on finding that perfect Instagram opportunity.

The element of choreography was perfectly utilised by a handful of designers that incorporated experimental dance and spoken-word poetry into their collections. Jessica McGrady was one such example; she enlisted poet Emma Carryl to model an asymmetric black look and perform one of her poems. The designer revealed backstage she had struggled to define her identity soon after enrolling at RCA, and eventually decided that the mediums of fashion and performance could voice characteristics that her words could not.

Stefanie Tschirky also communicated more than mere clothing, instructing her model to stumble through the venue in a crazed, disorientated manner. This element of imbalance formed part of Tschirky’s research, which was focussed on chaos theory, the idea of finding beauty in disarray and the eternal question “What is beauty?” The result of her musings was a tight-fitting transparent dress adorned with intricate lines of cobalt blue that crept up to the model’s face. The pattern was a reference to the waves of the ocean; a powerful natural element that recurs throughout chaos theory due to its unpredictable behaviour.

Elsewhere, Timothy Bouyez-Forge pushed the limits of garment construction to the extreme, using industrial processes to create pieces which blur the lines of fashion and mechanics. The intrinsic link between sex and machinery was his key inspiration, but he also riffed on the idea of an outfit acting “almost like a mode of transport... Maybe it could take you to another land, another dreamscape”. This hint of fantasy was evident in the sculptural look selected for last night’s show, an incredible couture piece created from the reconstructed fairings of a scrapped motorcycle.

Oksana Anilionyte’s approach to textiles was similarly forward-thinking; the result was a unique fabric which visually recreated the ripples of liquid and reacted to body temperature; this was a stylish “second skin” that worked in tune with the human body. Then there was Jessica Deacon, who cited anomalies of the animal kingdom as her primary inspiration. Pink fairy armadillos and yeti crabs may be unusual reference points, but Deacon recreated their chameleonic skins in a series of fluorescent fabrics. Designer Mao Tsen Chang also referenced the animal world, instead working faux fur into a kaleidoscopic knit showpiece that proved fashion can be both fabulous and cruelty-free.

A handful of menswear designers rounded off the presentation; the most talked about inclusion was Per Götesson, whose deconstructed denim recently won him sponsorship by Fashion East and a show with MAN. However, Götesson wasn’t the only charismatic Scandinavian to cut his teeth at the RCA – Niels Gundtoft Hansen showed star potential with a collection inspired by the contrast between the industrial grime of the Danish North and the famous “fairytale city” of Copenhagen. Hansen made his own textiles by heat-pressing tarpaulin, resulting in a hooded motorcycle jacket inspired by the textures of wet asphalt and rusty containers that litter the Danish seafront.

With something as established as a graduate show, it might seem strange to throw tradition out the window. But, as the class of 2016 showed, risks are worth taking. The highlights were many, the show compelling, and the university’s unconventional approach is certainly paying off.