Hosting her own Retro-Spective at the ICA, the Dazed 100 designer troubles the line between fashion and art – watch her triptych of AW16 films here 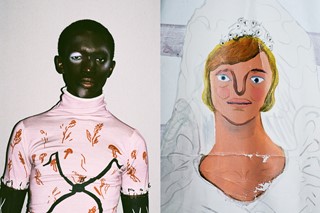 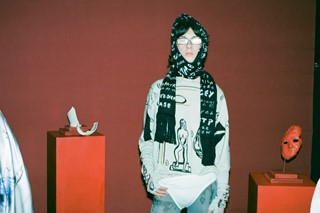 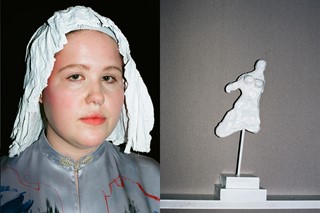 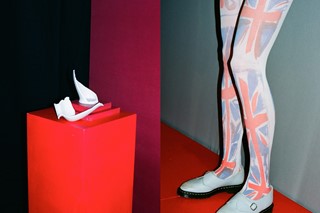 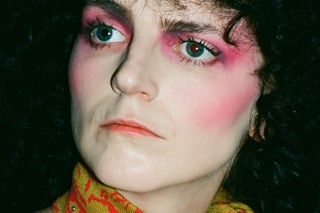 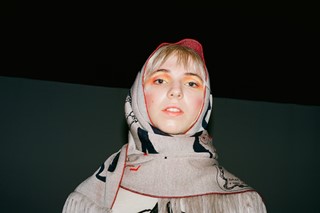 This is one of four features on the Dazed 100 designers who showed their AW16 collections at London Fashion Week. Vote for Claire Barrow in the Dazed 100 here, read features on Molly Goddard and Richard Malone and stay tuned for a piece on Ashley Williams.

Claire Barrow is bored of people asking her whether she’s an artist or a fashion designer. For the past eight seasons, she’s been disturbing the line between the two occupations, adorning clothes with distinctive, surreal scenes and characters of her own making. In April, she will stage her first solo exhibition at London’s M. Goldstein Gallery, and it was the act of painting on canvas in preparation for the show that that got her thinking about her AW16 fashion week presentation, held at the Institute of Contemporary Arts.

For the presentation, Barrow hosted her own fake retrospective (dubbed “the Retro-Spective”) which took the form of an exhibition, set designed by Clementine Keith-Roach, sound designed by Owen Pratt and art directed by Dazed’s Jamie Reid. Barrow arranged her cast of models on platforms and plinths as if they were living works of art, complete with gallery-style plaques which described their clothing (‘Untitled Bust, 2016. Clay, acrylic, wheat, plaster of paris, bra fastenings and elastic’, read one, followed by a comment on the piece's protruding plaster nipples). A female model lounged on a block like a goddess, while nearby a clay sculpture occupied a shelf and a selection of drawings could be peered at through the glass top of a vitrine. There was even a faux giftshop, displaying “Retro-Spective” t-shirts and tote bags beside a spinning display of postcards, as well as a curtained-off area where visitors could watch three films Barrow has produced to mark the season.

“Everything’s a big mess, but I wanted it to feel like that – very confused, very experimental” – Claire Barrow

“The question is always, ‘Is it fashion or art?’” the designer explained the afternoon before the presentation, taking a break from the chaos of fittings and final touches taking place in her studio. “The Retro-Spective combines the two, and also references a lot of different eras in history and the history of fashion and art. Everything’s a big mess, but I wanted it to feel like that – very confused, very experimental.” Rather than look back at her own work, references in the collection spanned Edwardian collars borrowed from the Suffragettes, Medusa motifs courtesy of Greek mythology, and anarchy symbols and union jacks lifted from punk and Britpop – not to mention elements inspired by traditional China and ancient Egypt. Styled by Dazed's senior fashion editor Emma Wyman, it felt like a coherent chaos typical of what Barrow has termed her “car boot sale” aesthetic, and incredibly, considering the way illustrations covered every garment, there was only one character who was repeated – otherwise, every piece and every drawing was unique.

This historical and cultural eclecticism was inspired both by Barrow’s regular trips to the British Museum and the National Gallery, and the way we now consume imagery with a simple sweep of the thumb daily on our Instagram feeds. “I was scanning library books constantly, looking at Instagram,” she says. “The collection is kind of a reaction to Instagram, that we’re getting references pushed down our throats all the time. I wanted to question – is there anything new? Can new subculture or fashion or art even exist anymore?” It’s a serious line of questioning, but not a surprising one for a designer who has spent past collections examining topics like our place in the city and the kind of clothes we’d wear in an apocalypse.

From the lofty prose of the ticket-style invite (“You are hereby invited to view the Autumn Winter 2016 collection of Ms Claire Barrow...we hope you will accept this invitation and you will grace us with your presence”) to the very act of staging a retrospective before she's even had a solo show, there was a strong sense of fun in Barrow's faux exhibition. “Putting on my own retrospective whilst I’ve got the ICA as the venue…It’s quite narcissistic in a way,” she considers. “It relates to this internet culture of self-promotion, of needing to put yourself out there.”

“The collection is a reaction to Instagram, that we’re getting references pushed down our throats all the time. I wanted to question – is there anything new? Can new subculture or fashion or art even exist any more?” – Claire Barrow

And then there’s the triptych of films that accompanied the presentation. It began with a “making of” – a video commissioned by M. Goldstein Gallery and created by 13-year-old filmmaker Duke Brooks – which sees Barrow painting enormous canvasses in Soho’s Elms Lesters Painting Rooms. Used primarily for the painting of theatre backdrops, Barrow can be seen decorating on the giant, moving canvasses, which were then cut into couture garments that featured in the exhibition. Second came a piece by artist Liv Fontaine, who also modelled in the presentation (in the aforementioned plaster bust, which she wears in the film as she eats grapes, emperor-like). For this, Barrow gave her no instructions – “I said, ‘Do not tell me what you’re doing! Here are some photos, have a look at them and then do whatever you want.” Finally comes Kubla Khan by Alice Neale, where Frank LeBon recites Coleridge’s poem as the presentation’s models go on a weird, almost paganistic journey dressed in the collection.

With models cast from her circle of friends rather than agencies, Barrow continues to thwart the traditional expectations of beauty and the body that are enforced on fashion, rejecting the idea that a model should be a clothes-hanger rather than have a personality. This season her motley crew of muses also made you question the sometimes stale, pale and male art establishment, with her presentation acting as a testament to the power of the two disciplines coming together. As for whether Barrow is an artist or a designer – “I have to be quite on my own and quite insular when I’m painting, so that is the time I feel like I’m an artist… But then I’ve also got to make the collection with everyone else involved like a normal fashion studio,” she shrugs. The answer is simple: she’s both. You only wish more artists’ retrospectives would be like her’s.

Watch and read more about Claire Barrow’s AW16 films below:

The first film on display is by 13-year-old filmmaker Duke Brooks. It documents Barrow painting onto two 15 metre long canvases from which the couture garments of her collection were cut.They were worked on by using the paint frames in the theatrical backdrop studios, Elms Lesters Painting Rooms in Soho. The project was commissioned by Nathaniel Lee-Jones of M.Goldstein Gallery, who will be exhibiting Barrow’s first solo art show in April 2016.

The second film is by artist Liv Fontaine, from Southampton entitled ‘Opulence, Violence and Loss’. In her own words; ‘Medusa loves her life beside the ocean and her ravishing looks bring her many suitors. But when she is raped by Poseidon in Athena’s temple, the enraged goddess transforms Medusa’s beautiful hair into serpents and makes her face so terrifying that the mere sight of it turns onlookers to stone. Betrayed and violated, Medusa is left desolate.’

The third film shown on screen is by photographer Alice Neale which shows clothing from the collection in a film of chaos and calm, with Frank Lebon reading Samuel Taylor Coleridge’s poem ‘Kubla Khan’.