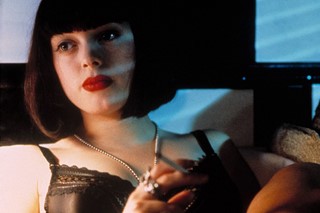 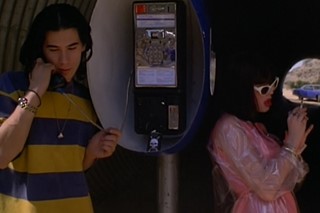 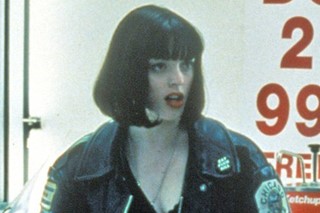 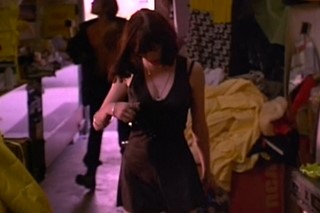 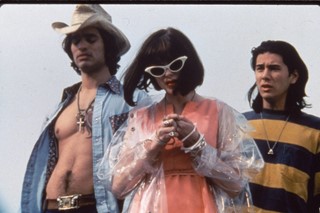 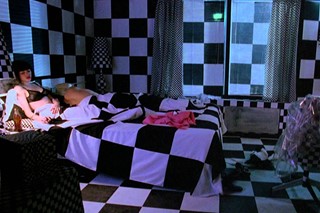 Taking place in world of neon-lit convenience stores, pulsating industrial clubs, acid-trip motels and post-Aids anxiety, The Doom Generation (1995) teeters on the brink of an apocalypse that never comes. Released on this day 20 years ago, it was billed as the ‘heterosexual’ film of director Gregg Araki’s beloved Teenage Apocalypse trilogy, a series that deals with queer identities against an increasingly surreal cinematic landscape. Through Araki’s lens, the sprawling, night-time wastes of LA become a backdrop as ripe for alien abductions as gay hookups.

With a narrative that follows trio Jordan (James Duval), Amy (Rose McGowan) and Xavier (Johnathon Schaech) across the desert as they go on the run from an accidental murder, The Doom Generation is meticulously crafted – every song, every piece of slang carefully selected by Araki. It might have been lost on audiences at Sundance, who walked out, but it has substance in its intentional superficiality – there’s wicked satire in the way it co-opts typography to leave less than subtle messages, pushes teen alienation to its limits, riffs off mass media hysteria and punishes the sexual transgressions of its trio of characters in a bloody climax.

As well as all that, it also happens to be one of the most stylish movies of the 1990s, as any glance at your Tumblr dashboard will attest. There’s Xavier donning a D.A.R.E to Keep Kids Off Drugs t-shirt, Amy stomping a cigarette out with her battered Dr Martens boot, and cult VIP Parker Posey in an enormous Dolly Parton wig for her cameo as a totally batshit ex-lover out for revenge. To mark the film’s anniversary, costume designer Cathy Cooper recalls how she crafted the wardrobes of its iconic characters – head here for an annotated take on the film by Araki, its cast and crew.

How did you plan what you were going to do for the actors?

Cathy Cooper: I have to say Gregg was vague, very vague – because he didn’t have a lot of films under his belt and he was kind of flying by the seat of his pants in a way. That’s no disrespect, we were all young! It was only my second film as a costume designer and a lot of the people that were working on it came from the background of music videos, so I feel like a lot of his references came directly from that. So I did drawings and I mapped those characters out. For Rose, I just went to punk rock, I looked at all the punk rock chicks that I used to hang out with. I was born and raised in Southern California, which has the hardcore scene. So she was a direct reference to ‘that chick’ that used to hang out with bands. Not a chick in a band, but a chick that used to hang out with bands. Two different things! That girl whose boyfriend was a singer, and who was completely narcissistic and really didn’t give a shit about anyone but herself. And that’s her character.

When they go to the thrift store, she puts on that pink dress with the plastic mac and she’s got those cat-eye sunglasses... what was the inspiration behind that look?

Cathy Cooper: Well, it was kind of a multi-functional inspiration, because in a later scene she gets tortured, and that plastic jacket actually served as an entrapment for her. Also I wanted to make it a visual transition between the black dress and the bright colour, because after that scene the movie shifts, so it actually gives you a visual transition. And also, if you notice, the shape of that dress is similar to the shape of the black dress.

That black dress is probably the most recognisable element of Rose's costume. Where did you get it?

That came out of my closet, but I had to cut the hem off it. Ideally you have multiples of things but in my experience as a costumer, if you find something that works you do use that thing and you guard it! I really allowed all those actors to live in their clothes, I didn’t really clean anything. Johnathon was like a method actor, his clothes were filthy. He was as filthy as he looked!

“I really allowed all those actors to live in their clothes, I didn’t really clean anything. Johnathon was like a method actor, his clothes were filthy. He was as filthy as he looked!” – Cathy Cooper

How long was the filming for?

Cathy Cooper: We did it pretty fast, it was like a month and a half. The first day that we filmed was the big earthquake, the 1994 earthquake, and we were filming near the epicentre and I remember distinctly driving out for first day of work and it looked like Armageddon… there was dust in the air, there were power lines down, there were buildings cracked in half... it was crazy! That’s one of the worst earthquakes that I’ve ever witnessed in California.

Cathy Cooper: One of the locations that we shot at, the minimart that Margaret Cho was at, the side of the building was cracked completely. It should have been closed down, there was a piece of glass that was loose over the front door – if it had fallen it would have been like a guillotine!

Cathy Cooper: I think that was a combination of me and Gregg, and that’s also a reference to a lot of the guys that I knew in bands, that would just wear something messed-up like that – somebody like Keith Morris from The Circle Jerks.

And then he transforms into a weird, homoerotic cowboy character at the thrift store...

Cathy Cooper: Well the three of them have this sort of ambiguous, bisexual hyper-sexual, teasing, fucking relationship, so the transition of the thrift shop ends up putting his character in a different position. It reclaims him into something that is almost unidentifiable to your initial introduction to his character. There’s a flip that happens at that point of the movie. Jordan becomes the third wheel guy – he ends up being a little passive in that relationship so his outfit was a colour choice, to make a distinct transition into the second part of the film and to redefine him as a more passive character.

What about Parker Posey’s outfit?

Cathy Cooper: I wanted to make her look like a drag queen! That was the first time I’d met Parker and I love her, she is one of the funniest people I have ever met. She’s a big clothes-horse so we created that thing together – she wanted to take it over the top and I was like ‘Let’s do it!’ Me and Parker have like the same birthday, same sense of humour, so it was really fun working with her and going very RuPaul’s Drag Race! my friend Jason was doing hair and he and Parker were also really good friends, so the three of us put that together. She’s in that movie briefly and she just wanted to hit it hard…

Yeah, she makes an impact!

Cathy Cooper: If you add about 50 years on her, you’ve got like, most of the ladies that ran the bars in the town that I grew up in – that’s some crazy Midwest psycho lady! Still dyeing her hair, putting on a weird ill-fitting wig and trying to dress like she's 20 when she’s not, you know what I mean? It’s a combination of really fucked-up Americana and drag…

And those crazy fast-food uniforms, with the dinosaur heads?

Cathy Cooper: Oh! I bought those – they were orange cover-alls that I bought and then I sewed the green stripes on there. Then Thérèse (DuPrez), who was production designer, she made those crazy hats!

How much did the main actors come to embody the characters?

Cathy Cooper: Well all three were very different. Like I said Johnathon was full-on method, that guy was that person, he became that person 24-7 to the point that it was a little annoying – but whatever, that’s method! He had a commitment to being that character. Jimmy had a little bit less experience and he a sincerity that actually was very tied-in to his character, that really enhanced how he fleshed out that character. And that was Rose McGowan’s first movie really, and Rose was really precocious, she was 18, she was that girl! She’s just that girl! I don’t know how else to say it, she essentially played herself. And again, another person that, those two had less acting experience than Johnathon did. But I think that’s probably why Gregg chose them, because he saw them as those people.

Are you surprised that the film is so cult now?

Cathy Cooper: Yes. I am. I’m pleased! I just make stuff, you know, and I’m super happy when there’s a great response. There’s a couple of friends of mine that are like ‘Oh my God Doom Generation is one of my favourite movies!’ I’m like ‘Really?! Are you kidding? Seriously?!’ And then they’re explaining it and I’m like ‘Wow, that’s profound’. So I’m pleased, I’m happy for Gregg, hats off to the guy! I think it’s fantastic.