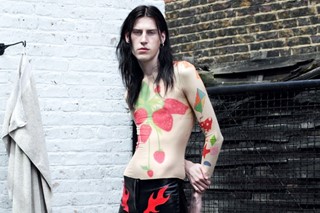 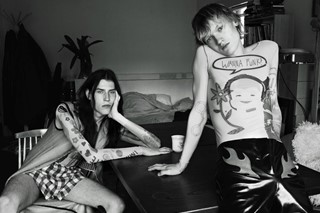 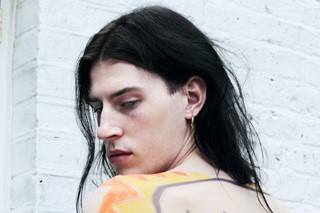 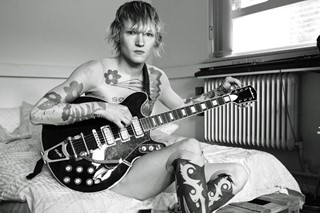 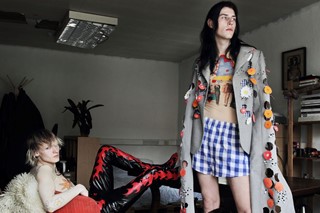 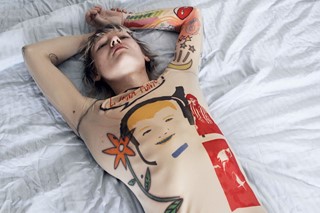 Stefan Cooke’s work flirts with nostalgia in a distressed, sexual, and stereotypically rock‘n’roll manner. From skintight tattooed shirts to star-studded thigh high boots for men, his work stands out boldly among this year’s crop of Central Saint Martins BA Fashion graduates. Not your average Print student, Cooke wanted to go beyond the common understanding of the discipline – choosing to weave, melt and sew his garments together, much inspired by artist Bill Woodrow who masterfully deconstructs every day objects like washing machines and car bonnets, and sticks them together.

“I love the idea of the guy sitting opposite you on the tube – now in his suit, but once upon a time he wore things like that,” Cooke explains of his inspirations. “Capturing someone’s youth in a garment that is pretty much the opposite of where they are now. I guess that’s why it’s quite sad too, the restraint of having to fit in after a while, to get the job or to get by.” Stefan remains free-spirited, but he is about to embark on his next journey inside the college’s walls: the Textiles pathway at the MA Fashion, where he wants to explore ‘fabric subversion’.

If you could travel in order to get inspiration for collections, where would you go to?

Stefan Cooke: Japan would be my number one destination right now. I would love to go for a few months to really immerse myself into it; I want to look further into fabric manipulation and techniques – especially old traditional crafts and weaving – for my MA. I want to go anywhere where I’m totally out of my comfort zone and where I get to sit, talk and see people working with their hands.

What do you personally want to do to make a difference and bring about change in fashion?

Stefan Cooke: Re-use and recycle as much as I could. Throughout my career I would love to have a positive influence on the way people consume clothes and counter-act against fast fashion. Everything that’s related to change is brought on by education, be it in fashion schools or dealing with people day to day – that’s where it needs to begin. That said, it’s depressing that people need to be educated on how to treat people, especially how to treat factory workers and interns that have a lot responsibility for a company's success.

“I love the idea of the guy sitting opposite you on the tube – now in his suit, but once upon a time he wore things like that” – Stefan Cooke

You looked at Bill Woodrow’s cutting up of found objects for your final collection. Why did you look at something so deconstructive to inspire a collection of ‘wearable’ things like clothes?

Stefan Cooke: I guess it’s because that’s what his work was made out of: things that were in a working condition, like washing machines and ironing boards. Each interesting thing came out of something else, and I wanted to have that element in my clothes, just like he kept a link with each of his artworks – between the guitar and dishwasher or the parrot and the car bonnet – I wanted to keep the link from deconstruction to wearable pieces.

What were the best three things about your experience interning for Walter van Beirendonck’s studio?

Stefan Cooke: Working with Walter himself and with his amazing team, working towards a scheduled and anticipated collection and understanding how to make a living out of what you love, and experiencing fashion from the inside out and working on every possible aspect of the company. There was nothing I didn’t do and I learnt more there than I did anywhere else.

You were also taken under the wing of John Galliano himself, which things were most valuable there?

Stefan Cooke: The work I was doing was very ‘loose’ so John would advise me, but also let me get on with a lot of the research myself and let me find my own way of translating my ideas to him. Being mentored by someone who has so much experience and knowledge of fashion and experiencing Paris with John was so valuable – he is definitely the best tour guide Paris could ever get.

Models Ryan and Nick T at Tomorrow Is Another Day