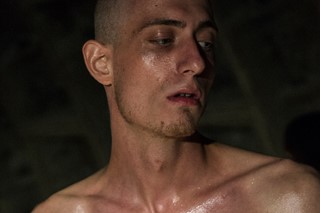 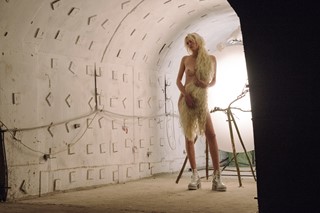 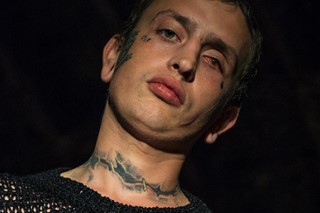 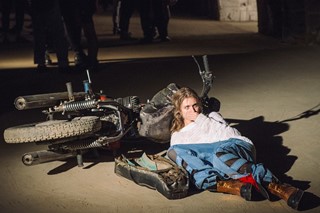 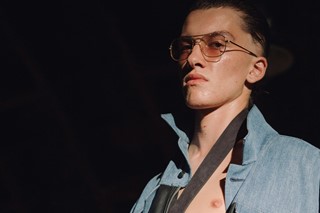 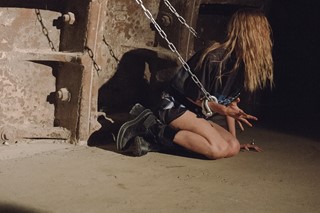 Imagine going to a fashion presentation in a Cold War shelter 65 metres underground, hidden in the closed tunnels of the Moscow metro. No fashion schedule, no seating plan, no RSVP. You can get in but can’t get out for an hour, all you can do is wander in the dark, occasionally meeting models who look more like lost kids from some dark cyberpunk movie. This is exactly what the debut show of new label Darkdron looked like.

In fashion, somehow nothing goes down as well as a mystery: note the enigma-fuelled success of Martin Margiela or VETEMENTS. For his new brand Darkdron, designer Gio Forbice chose exactly that tactic: the label’s website has nothing but a 90s style GIF of a computer generated dove in flames.

The reason for this ties into the fact that Darkdron emerged as a reaction to surveillance society where we are under the constant eye of CCTV, as well as a love for the aesthetics of old sci-fi movies. “I've been always fascinated by classic 1980s – 1990s sci-fi movies and the dystopian futures they created,” explains Forbice. The white dove coming out of the flame we use on one of the prints means freedom that you own, but can't really have.”

Darkdron is not a Russian brand, yet the show was held in Moscow: not necessarily a prime location on the fashion map. So why did Forbice drag a crowd to the bunker so far from major fashion weeks? “It would have been obviously easier to do the presentation in Paris or New York or London,” he replies. “But we wanted a different outcome. When you see the pictures, you can't recognise the place, the faces, you don't really understand what's going on. We wanted to do the show out of space and time frames. As people were walking through the long tunnels, they heard disturbing gasping sound. They stepped through the story: a crashed bike with the girl crying, a boy with an axe, missing girls, chained victims... This dystopian fantasy seems very real to me.”

“When you see the pictures, you can’t recognise the place, the faces, you don’t really understand what’s going on. We wanted to do the show out of space and time frames”

Before descending (literally) underground with Darkdron, Forbice designed for Forfex, a shoe brand which collaborated with Hood By Air and was seen on Rihanna and Kanye West. Darkdron’s design DNA isn’t too far from that of Hood By Air: blending 90s influences and subversive sex appeal. But behind the designs lies a bigger message and desire to challenge the way fashion storytelling works. Forbice is clearly trying to push the viewer out of their comfort zones, make them feel both uneasy and mesmerised, and also reflect on today’s world. Darkdron is not as much about dystopian future as it is about today’s media environment. “Look at the media. Sick news doesn’t just pop out, people share and repost it, send it to their friends, get angry or laugh.”

Despite staging the show in perhaps one of the most isolated fashion locations ever, Forbice is hoping to share his creations with sci-fi devotees and radicals in Paris, New York and beyond. Darkdron is gambling on today’s generation’s love for the dark dreams of a 90s VHS collection, and it might be on the right track. The key image on Forbice’s pop cultural shrine comes from Terminator. “You know the scene when the Terminator goes down on the big chain to melt and then shows thumbs up from hot lava to the young John?” he says. “It will give you the better understanding of what I'm doing here now.”

The soundtrack to Darkdron SS16: