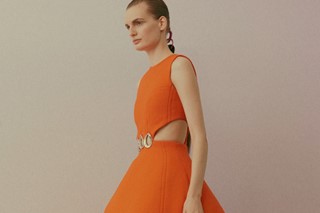 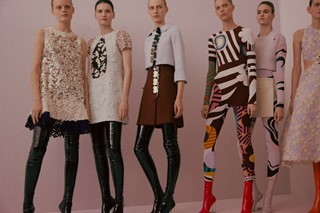 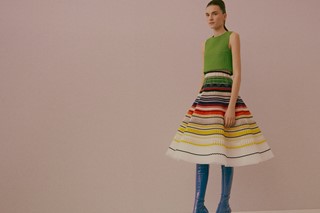 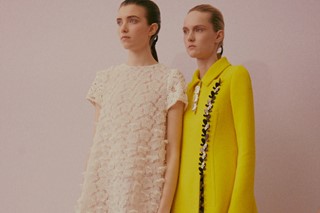 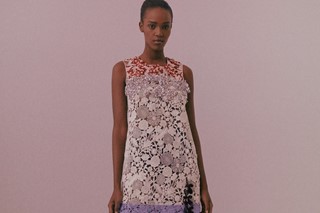 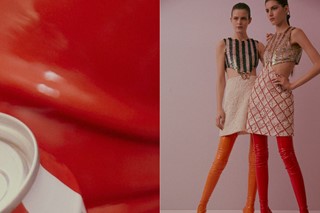 As we entered the set at the Musée Rodin, we saw an intricate blur of white scaffolding, deep pile dusty rose carpet and a repetition of distorted reflections inside a two-tiered mirrored box. Reflecting is exactly what Raf Simons has been doing – on what he has thus far achieved at Dior (hitting all the right notes when it comes to paying historic homage to the house) and on what the maison really means to him and to women all over the world. At this seminal couture show, Simons took us on a trippy roller coaster ride that blended “the romance of the 50s, with the experimentation of the 60s and the liberation of the 70s” as he said in the press notes. Simons has proved previously that he can be a master of the past – the far, removed past at Dior SS15, his near personal past as seen in his own namesake brand – and so began this hallucinogenic show, rife with time travel. Simons deftly pulled the most forward-thinking elements from each decade together as we sat there in wonder, taking in a sensory overload of decoration that was never going to be just surface deep. By piling on the plastic, the embroidered guipure lace, the rainbow palette of sequins, the psychedelic prints and the ribboned pleating in a slew of silhouettes that spanned the decades, Simons was trying to articulate an unknown quantity – where are we going to go, who are we going to be, what do we want to be – and that’s a brave line of questioning in haute couture.

Bowled over by Bowie:

A medley of David Bowie songs including “V-2 Schneider”, “Moonage Daydream”, “Rock ’n’ Roll Suicide” and “Wild is the Wind” soundtracked the show, spanning Bowie’s own illustrious career just as the show careered from decade to decade. Bowie wasn’t mere inspiration for Simons, but a symbolic vehicle for communicating how a Dior couture collection can operate within a chameleonic context. You had a discernible nod to Bowie’s Ziggy Stardust incarnation in the Kansai Yamamoto-esque catsuits but more importantly, Bowie was held up as a champion for change and evolution. Much like Simons.

“Something wilder, more sexual and strange” is what Simons desired for this collection and that’s exactly what we got. There’s rarely any sense of kink in couture because of a self-perpetuating perception that it should revolve around ladylike ballgowns. Daring to propose photo printed plastic opera coats, paired with brightly coloured skin tight latex boots with metal structured heels was a mind blower. Then came the printed catsuits which looked like 70s free love body painting, and the navy tattoo bodysuits used to convey a very Dior “femme fleur”. Voluminous 50s dresses still abounded, but when combined with flesh-baring “O” ring cut-outs, cropped tops and rainbow glitter boots, it became the overload you couldn’t get enough of. Too much of a good thing is… something amazing.

See an exclusive gallery of GIFs and collages by Rosanna Webster below: 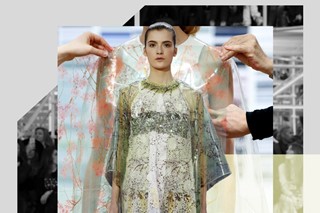 Watch the show below: