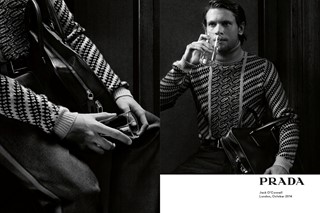 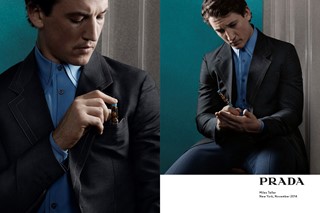 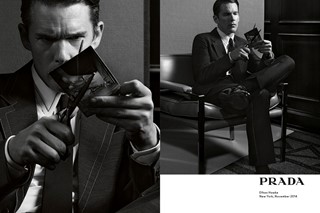 For SS15, Prada has stuck to its trusted formula of casting Hollywood leading men for its menswear campaigns. This season, Ansel Elgort, Ethan Hawke, Jack O’Connell and Miles Teller make up the crew of box office stars in a series of ads shot by Craig McDean.

With the exception of Hawke (sorry, Ethan), the campaign continues Prada's habit of cherrypicking the newest breakout male stars: Elgort erupted onto the scene with last year's The Fault In Our Stars and Teller is currently riding a wave of popularity thanks to the critically acclaimed indie hit Whiplash.

Meanwhile, O'Connell has been busy translating his British Skins fame into Hollywood success with a starring role in Angelina Jolie's war epic Unbroken. Both O'Connell and Teller have been nominated for a BAFTA Rising Star award today.

"Photographer Craig McDean shoots the cinematic cast between London and New York," reads a statement from the Italian house. "But the sense of place in is more psychological than geographical. Close-ups of hands, faces and agitated outlines conjure a sense of the unknown."

"Objects, knife, orange, dice, prism, compass, pen, lens, pendulum are picked up, moved, balanced. Pensively scrutinized. Familiar things become less than familiar the more they’re looked at. As if the magical forces that make the world seem so normal have, for an indeterminately short time, revealed their strangeness."

Ooh, spooky. What do you think of the latest campaign?

Head here to check out all of this season's fashion campaigns.