Beneath specially constructed puritanical arches, Miuccia sent out a gang of 50s bad girls with brows to match – complete with a nod to John Waters 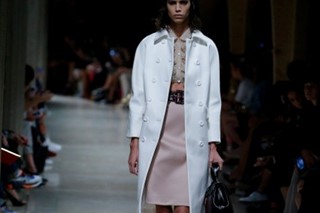 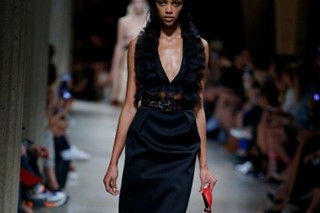 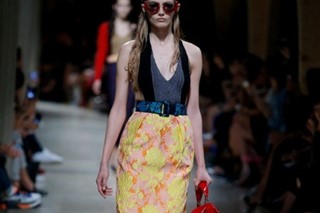 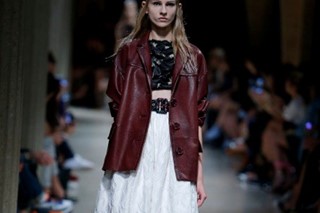 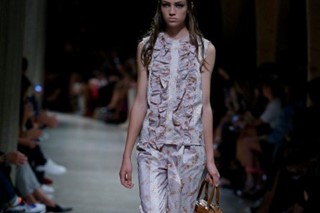 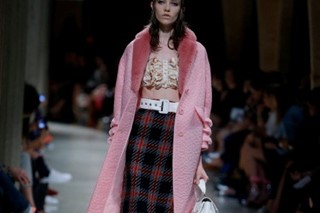 The OMA-designed wooden arches evoked the cloisters of a monastery, and as we sat waiting on puritanical seating, listening to Gregorian chant music, we wondered if we were to see a similarly sombre collection from Miuccia Prada. It was all a ruse of course. The models – with their slicked back half and half hair, drawn on Chola-esque eyebrows, hobbling-slash-strutting in their bow mules and stiletto sandals – meant business. The silhouette was Miuccia’s well-versed version of the housecoat, the pencil skirt and the ruffled prettiness up on top. Miuccia had them trussed up in finery – 18th century style floral silk and cloqué, counter balanced with fraying wool check and murky shades of leather. Lady goes vamp. Tarts and vicars. Runaway girls. This was no ordinary church.

The soundtrack was layered (literally), complex and laden with clues into the workings of Miuccia’s mindset for this collection. First off, The Shangri Las’ spoken word song “Past Present Future” where “Violent joys and broken toys,  Laughing girls and teasing boys” is said wistfully over Beethoven’s “Moonlight Sonata”. The heartbreak high aspect of the track pointed to saccharine strands of the collection, as seen in the sheer ruffled crop tops and prim ‘n’ proper housecoats. Norwegian noise rock outfit Moon Relay with their punctuation punctuated tracks “‪////////L” and “""""S” provided the jarring notes. These girls – in their florals, ruffles and cinched in pencil skirts – were no innocents. Then Miuccia had a John Waters/Divine moment (had she seen Jeffrey Schwarz’s documentary I Am Divine?) as both the original and cover versions of the central theme of Water’s 1974 classic Female Trouble played. “I got lots of problems, Female Trouble, Maybe I'm twisted, Female Trouble.” The lurid and amplified aesthetic, as worn by Waters’ best loved characters filtered into the collection. As with all of Miuccia's collections, it takes deep dissection to really get at the layers she has worked in.

The soundtrack to Miu Miu SS15: