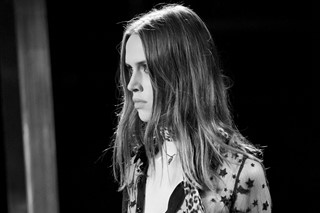 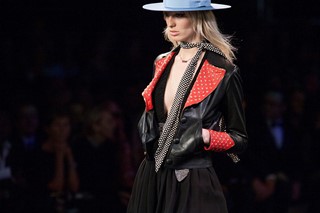 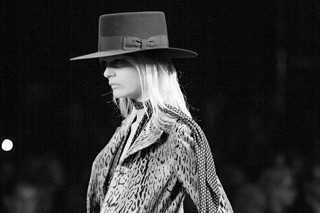 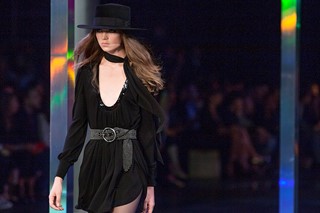 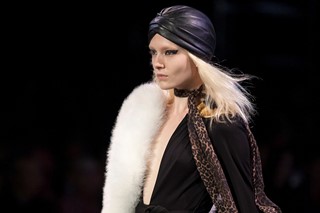 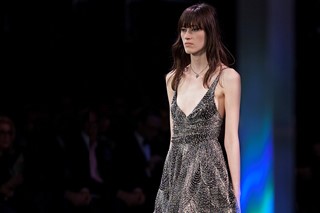 Every Saint Laurent show has thus far felt like a heart-palpitating gig, and this one was no different. We the audience shuffled in, trying to get the best spot so that we could see Hedi Slimane perform a complete styled out vision of girl mingling with sound and set – this time a holographic grid-like structure that swung around creating rainbow reflections. Lucky peeps like Thomas Bangalter from Daft Punk or Carl Barat from The Libertines got to lounge around on the front row (both on the bench and on the floor) with beers in hand. The rest of the Slimane disciples moshed out in the back. We were there to see late seventies tinted glam of the most seductive order. The specially recorded version of track “1, 2, 3” by French disco-tech outfit Aleide started to pound as girls stomped their way down the runway in sky high platforms, leather short shorts and cropped jackets, Roxy glam mini dresses and barely there tights. The dusting of razzle dazzle sequin and gold thread embroidery ensured that Saint Laurent’s handiwork presence was there. The breathy vocals of Aleide singing “Un, deux, trois, oooh la la” built up to a headonistic climax and as the troupe of glam girls walked out to the moving set, which threw mad prism colours everywhere, you could hear both guys and girls breathlessly gushing in the crowd – they “died” for everything in the show. They clapped for an encore, cheering for Slimane to emerge from the black curtains. He didn’t.

Last season, the invite for Saint Laurent's show was a book of John Baldessari's appropriated images and found photography. This time round, Slimane turns to an older and lesser known "paraphotographer" Robert Heinecken, who collaged and juxtaposed popular magazine images with pornography. Flick through the book and it's a stream of negative images of erotica mixed with commercial advertisements. Slimane flirts with notions of these images in his show as the girls simultaneously give off both come-hither and take-no-prisoners vibes. On the final page of the book, a naked dominatrix stands next to a woman serene in a caftan, captioned with "It's going to be a long night." That mysterious and inexplicable feeling of what the night might bring, rang through the collection loud and clear.

There's no denying that so much of the retrogazing back to the summer of love and to the 70s in general that we've seen this season can be attributed in part to Slimane's collections for Saint Laurent. Look at Slimane's SS15 menswear show where girls and boys tripped out to a new rising of psych rock, and see how that mood has seeped into this current womenswear season. Like it or not, we're unwittingly vibing off of what Slimane is feeling and like his Dior Homme days, he's once again creating sartorial shifts, even from his far flung base of L.A.

The soundtrack to Saint Laurent SS15: