Dapper Dan took 80s Harlem hustler style into the mainstream, pimping out everyone from LL Cool J to Mike Tyson with his glamorous garms. He tells us how he redefined high fashion for the streets

Harlem outfitter Daniel “Dapper Dan” Day’s clients may have included Mike Tyson, Floyd Mayweather Jr and LL Cool J, but it’s the “hustlers and street people” he’s really got to thank for his success. “They were my primary clientele,” he says in front of both son and grandson in his beautiful brownstone, just minutes from the premises that once housed his clothing shop, Dapper Dan’s Boutique. “The look spread outside the hustler culture and was embraced by the whole rap world, and they just took it everywhere.”

The early-80s hustlers he initially served took their style cues from jazz and pop world figures like Frank Sinatra and Sammy Davis Jr, ramping up the Rat Pack flamboyance with greater volume and louder colour. In 1985, when LL Cool J turned up at the store, Dan’s reputation reached the rap game. “He was just coming out,” Day says, “and one of the gangster guys brought him in.” Soon the outfitter was creating iconic hip hop looks for the likes of Salt-N-Pepa, Bobby Brown and Eric B & Rakim. Bypassing a US fashion system that wasn’t hugely encouraging of black talent at the time, Dapper Dan made a name for himself through his individualism and spirit of independence.

The boutique opened in 1982 on 125th Street, between Madison and Fifth Avenues. “I liked where it was. Madison Avenue – you get the feel? Fifth Avenue – you get the feel?” he says, riffing off the luxury ring of those famous addresses, even though his shop was at least 65 blocks north of midtown’s high-end retail. For ten years, the 24-hour store was the go-to marketplace for flash Harlem style, a way of dressing that had its very own ecosystem. “Harlem likes a certain extravagance,” Day explains. “The mainstay are items made out of silk, linen, leather, exotic skins, minks and furs. Those fineries determine your status. The only variation you’ll find is among the young people for a period in their life, and as they graduate, they go right into that.”

Debra Shaw in conversation with Mowalola OgunlesiAfter 20 years in fashion, the McQueen muse continues to set the agenda for the meaning of cult – she talks all-access diversity with breakout London-designer, Mowalola Ogunlesi
Dapper Dan11 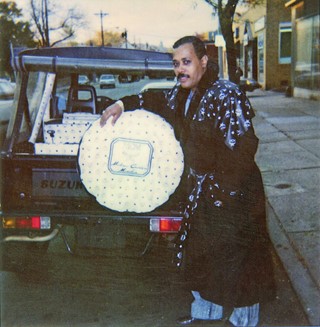 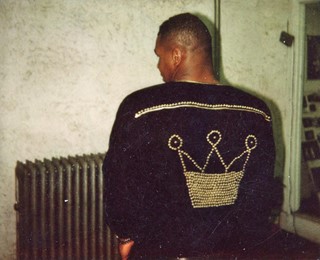 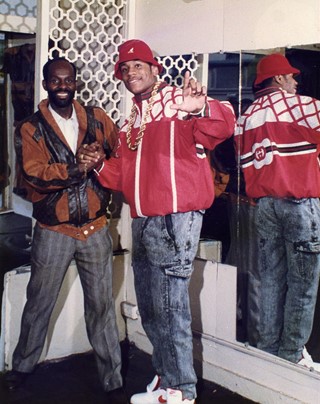 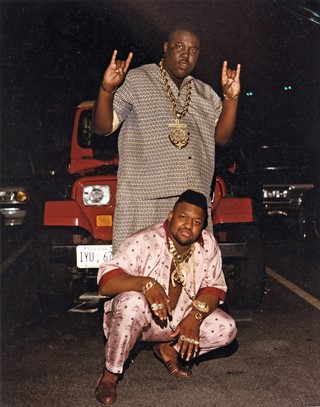 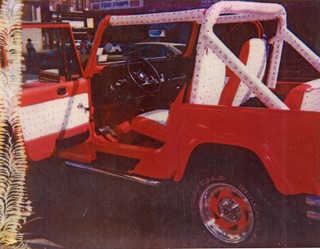 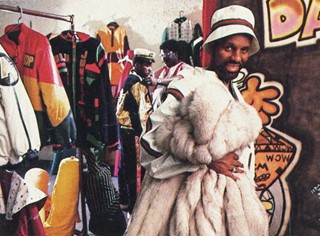 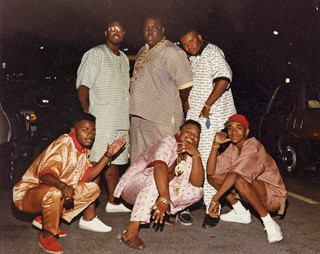 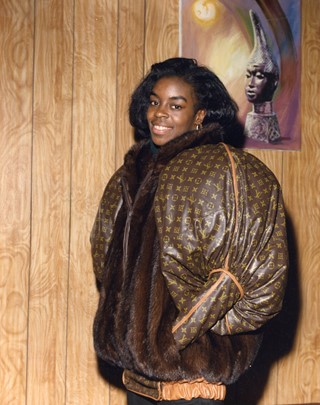 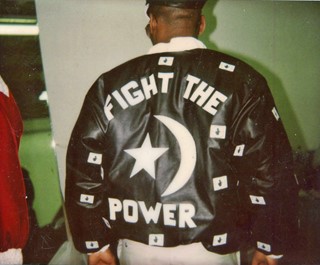 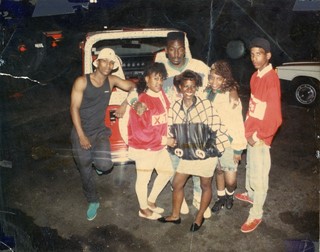 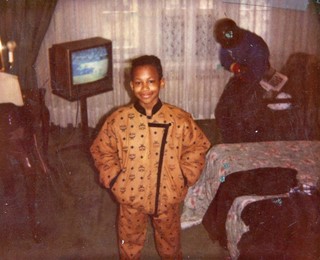 It’s hard to imagine the local teens and 20-somethings of today abandoning their Jordans, camo pants and busy jeans for old-school Harlem suits and shoes, but Day has lived in this neighbourhood long enough to know its cycles. Gentrification might also prove a threat to Harlem style, as the area’s “re-renaissance” pushes trueborn Harlemites out of certain areas. For now though, a stroll anywhere north of 110th Street suggests that the distinctive local culture continues to remain mercifully dominant and visible in the area.

Day started selling on the street way before he decided to open up shop. From the age of 25 he was capitalising on his reputation for always looking the part. “If people didn’t like the way I dressed, I wouldn’t have had the attention or the credibility. I grew up in a poor area in East Harlem – I can’t think of any of my friends who didn’t have holes in their shoes at any given time – so we were always attracted to clothes. That was the catalyst to make me want to be really sharp.” When asked if he ever goes low-key with jeans and a tee or whether it’s always about statement dressing, he replies emphatically: “Statement! Statement! Always have to look like I’m made. I have to dress to generate excitement, so people can say, ‘Damn! I wanna do that!’”

“I dress to generate excitement, so people can say ‘Damn! I wanna do that!’” – Dapper Dan

While archive photos of his work tend to focus on his use of luxury design-house logos and his custom designs for rap and sports stars (his puff-sleeved Vuitton monogram creation for American track and field star Diane Dixon is the most reblogged of his designs on Tumblr), it was actually enormous fur coats that kicked things off for him. “There were only three black furriers in the United States and I went to visit all three of them. I went and checked out their business and talked to them, and then I read all I could about the fur business.”

Rather than being scared of the competition, the older furriers schooled him about the industry. “They were nowhere near capable of supplying the demand, and they were fully familiar with the struggle,” he says, referring to the obstacles African-American businesses faced at the time. It was that struggle that then forced Day into designing his own clothes. “Originally my intentions were to buy wholesale and sell, but the things I wanted to buy weren’t available to me. The major companies would not sell to me – I would attribute it to either prejudice or location – so that inspired me to start making the things I made.”

A tailor friend helped Day bring his visions to life. “I wanted to make him a partner, but he wasn’t interested in the direction I was taking. He thought he could be the next major designer by doing it differently, so we parted ways six to eight months after that. He saw the possibilities of being a fashion designer by going through the same process as other designers, but he was African-American. It wasn’t going to happen,” Day says. And he was proven right: his friend never did become the creative director of a fashion house.

After his friend’s departure, Day recruited African tailors to make the attention-grabbing outfits he’d started to conceive. Fur coats were too seasonal, so he made the move into leather, suede and lighter goods. He quickly learned how to print on them, creating entire extravagant outfits of fake Louis Vuitton and Gucci logos for the first time. Before then he’d only created trims by using the material from wallets and bags he had purchased at the real stores.

Local racketeers, who were earning a fortune off the back of the crack cocaine explosion at the time, started exhibiting their dash and cash through his looks. Day got off scotfree from troublesome copyright issues until a 5am store visit from Mike Tyson in 1988 ended up with the boxer brawling with Mitch Green, an old heavyweight boxing rival. Press photos of Tyson wearing a non-collection Fendi jacket aroused the suspicions of copyright lawyers. (When Tyson brought in thengirlfriend Naomi Campbell, Day remembers “Naomi leaning over the cutting table and Mike Tyson asking her, ‘What do you like?’ and even back then, she said, ‘Well, I like Chanel.’”) Before long the boutique was being regularly raided by US marshals, who took equipment and supplies. Soon most of the labels whose logos he was ripping off began taking legal action, and he was forced to shut up shop in 1992.

He may have been illegally incorporating other brands into his designs, but Day remains cheekily indignant about his treatment. “I didn’t do knock-offs,” he teases. “I did knock-ups!” As he sees it, he was filling a gap, because big luxury brands weren’t working this form of fly-guy logomania on their own clothes. Indeed, Louis Vuitton wasn’t making ready-to-wear at all at the time. He thinks these labels are now lifting some of his ideas.

After the closure of the boutique, Day sustained himself through work for private clients across the States.

Today, his biggest private client is the boxer Floyd Mayweather Jr, currently the world’s richest sportsman with a salary of a cool $105 million per year. He was brought to Day in 1999 by Eric B, the promising young athlete’s then manager. Since that time, Day has created Mayweather’s entire wardrobe, including his ringwear. “He wasn’t even popular then – he was on his way,” Day remembers. “He wasn’t from Harlem, he grew up in Flint, Michigan, but he’d heard of me from that Mike Tyson thing.” So it turns out that Mike Tyson publicity wasn’t all bad…

“Floyd has a good sense of what he wants,” according to hip hop’s master tailor. “He will put what he wants out there, then he’ll ask me what I think, then we work around that. Almost all his outfits are his concepts – I just bring them to fruition. Floyd’s stuff is that traditional, high-end, real street culture. What he wears epitomises what I’m about.” Now you know who’s making Mayweather’s garms, you’ll notice those exotic skins, bold colourways and many-buttoned waistcoats – all signs of that old Harlem hustler style.

When asked for his proudest design moments, Day says they haven’t come through his clothes. “My MercedesBenz, which I did in Gucci, and my Jeep, which I did in MCM.” When pressed, he admits his most cherished piece ever is a Blackglama mink coat.

Although he could potentially be in his late 60s (he won’t confirm his age exactly), he’s trim enough to pull off what he would have worn in his 20s, and doesn’t believe in dressing your age – although he does admit to asking his son and grandson for occasional advice. “I always dress for the occasion. It all depends on the meeting I’m having and the impression I want to make. I dress according to the environment I’m gonna be in. I’m noisy right now!” Today, he’s dressed in red waistcoat, trousers and tie, especially for Dazed.

“The big controversy is men with skirts. That’s a big issue, because Harlem fashion is a manhood thing. You have to be an established tough guy to pull that off” – Dapper Dan

Walking around Harlem, you’ll see many older gents still immaculately decked out, heavily co-ordinated and fully passionate about their look. With such exuberant dressing in this part of town, is there anything that’s off limits? “The big controversy is men with skirts,” he says. “That’s a big issue, because Harlem fashion is a manhood thing. You have to be an established tough guy to pull that off.” Did Kanye pull it off then? “I don’t recall anybody asking me to make them a Kanye skirt!”

Harlem dances to its own tune, even when it comes to the very American ‘wear no white after Labor Day’ rule. “There’s a whole winter white thing here; that kind of rule doesn’t hold up.” Just as Day strove for independence by creating his own looks and running his own business, Harlem style exists in its own state of independence.Yes,it’s open to influence – Day likes to “Africanise” European looks, make trends “palatable for the street” and is famous for reworking French and Italian fashion house logos – but ultimately, spot a Harlem gent and you know his look couldn’t be dreamed up anywhere else.