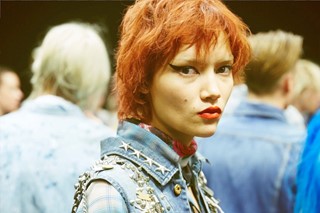 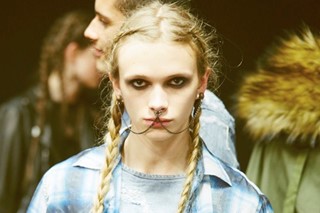 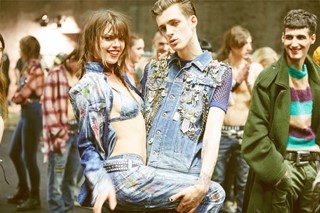 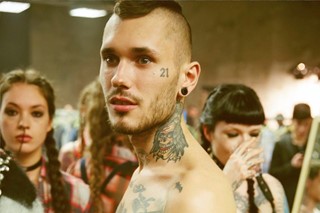 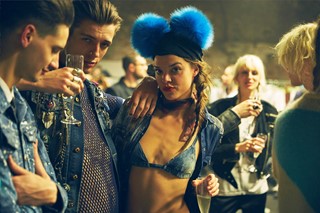 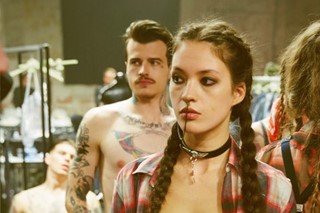 A riotous eruption of denim, leather and military codes – this was the next era of the Diesel revolution, led by Nicola Formichetti.

Sensory overload in Diesel’s native land of Venice. When we asked Formichetti what he had been listening to whilst designing the collection he had a simple answer: “Let me think. Oh yes. Army of Lovers – ‘Crucified’.” This might have been the track driving Formichetti’s latest collection, but it was a leather clad, thigh-high-booted Brooke Candy who was let loose to perform during the show against a digital backdrop created by Nick Knight.

“This collection illustrates my vision of Diesel in the future. We looked at the three core elements of the Diesel DNA: denim, leather and military. It was quite an instinctive approach and an honest one, in a unisex, equal way for things I like which are at the core of Diesel – a pair of jeans, a leather jacket, a military parka” – Nicola Formichetti.

Balaclavas bursting at the seams with red and electric blue fur mohawks and pompoms that swarmed the catwalk for a seemingly Pussy Riot-inspired finale starring Formichetti’s Tumblr-cast models.

Following the reinvention of Diesel with the #DieselReboot Tumblr, this season's show was not exempt from a similar social driving force. Twitter was used throughout the entire show process – backstage, during and at the afterparty. Tweeters were invited to ask Franca Sozzani and Anna Dello Russo questions, and Susie Bubble, model Kiko Mizuhara and Brooke Candy all contributed guest tweets.