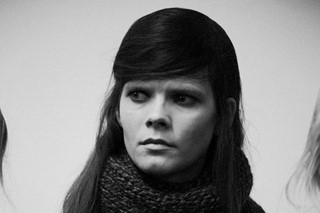 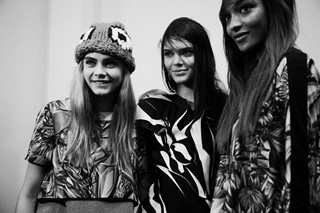 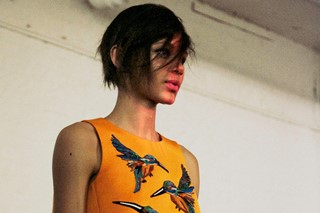 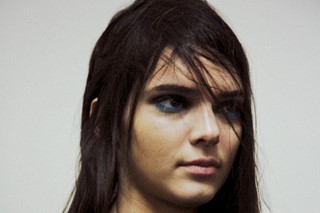 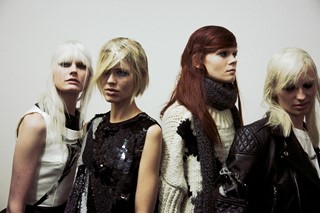 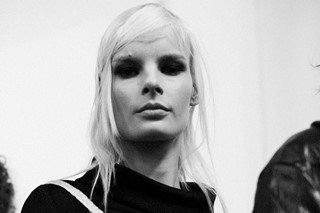 Last season during London Fashion Week SS14, we ran a story on what our phone habits are doing to the way we experience a fashion show. In it, we asked whether our relentless need to document everything is causing us to disengage with shows as we’re so busy taking pictures, filming video and tweeting that we forget to actually experience the moment and take it all in. (The Dazed team even spotted people taking selfies mid-show. For reals.)

Fast forward to this season, and it’s still phonesville at the shows, but last night the tables were thoroughly turned as Cara Delevingne stuck her tongue out and swaggered down the strobe-lit runway at Giles in an Eek beanie, filming herself and the front row on her iPhone before pressing pause so the catwalk photographers could snap a proper picture of her – all without missing a beat. Just minutes earlier, she had posted a backstage selfie Instagram video to her 4 million-plus followers going “It’s about to happen, it’s about to happen! Oh my gosh, first live video from a catwalk, arghhhhh!”

Cara’s clever happening – presumably orchestrated by Team Giles – was the surreal and inevitable next step in fashion’s picture-taking frenzy, perhaps only short of the prospect of designers taking selfies while taking their bow. (Did anyone else just go to a really naff visual place?) As we filmed Cara filming us, it seemed like an apt meta-ish commentary and play on the way phones have permeated the catwalk spectacle, acting as a weird obstruction between the spectators and the clothes. By placing the phone in a model’s hand, it highlighted the jarring and disruptive ways of our Instagramming.

But at the same time, it was fun, fresh and rebellious, a very Cara moment – reminiscent in its concept of celebs like Britney Spears and Joseph Gordon-Levitt turning the camera on the paparazzi – perfectly synched with the riot grrrl energy of Deacon’s show. And precisely because it was Cara holding the camera, the irreverent guerilla filming also gave a double nod to the spectacle of today’s celeb-obsessed culture – a feeling that was only heightened, as Kendall Jenner also took to the Giles runway, fresh from her debut at Marc Jacobs.

Kendall has been a major topic of conversation this week, with many rightly speculating that she would make an appearance at Giles. Even with only two shows under her belt, she is already a modelling phenomenon who inhabits a place beyond the 'normal' model realm. Like Kate Moss’ younger sister Lottie Moss or Vivienne Westwood’s granddaughter Cora Corré, who also walked Giles, Kendall brings an electric and tantalising aura of celebrity to her modelling game. Famous by association, she is now ready to break out of the reality TV version of the Mickey Mouse club and prove herself as something more than the cute kid who goofs around on screen and raids her mum's epic walk-in wardrobe.

“when you're part of what is arguably one of the most famous dynasties in popular culture today...how do you break free and prove yourself?”

But when you're part of what is arguably one of the most famous dynasties in popular culture today, and your sister gets proposed to on screen by her superstar rapper boyfriend, and has a sex tape that catapults you and your entire family into the spotlight overnight…how do you break free and prove yourself? When high fashion is your end game, this kind of celebrity becomes both a blessing and a curse.

The stars seem to be aligning in Kendall's favour, though. Despite living a life on screen for nine seasons of Keeping Up with the Kardashians, she is still a pretty blank slate. And as Marc and Giles give her their seal of approval (and Kim Kardashian steadily rebrands and de-low brows herself) Jenner Junior's star is rising. While we wait for Kendall's next move, there's always her 8 million follower-strong Instagram and a new selfie to tune into.