Ahead of her AW14 show today, the experimental designer talks taking it beyond gender with the star of her sensory SS14 show

For Iris van Herpen's SS14 show, models – including pioneering female menswear model Casey Legler – 'orchestrated' their own soundtrack on skeletal sensory pieces in a sensual performance that existed in realms of gender and sexuality not usually explored in fashion. For our Girls Rule February issue, we got van Herpen and Legler head to head to talk the misuse of feminism, the importance of intimacy, and storytelling.

Taken from the February issue of Dazed & Confused:

“I’m a woman who models men’s clothes.  But this is not about gender,” Casey Legler wrote in a recent article for The Guardian. In an industry in which the term “androgyny” is flung around so loosely it’s become a throwaway trend, the pioneering American menswear model, artist and former Olympic swimmer is intent on igniting a dialogue that transcends ideas of masculinity and femininity. In September, in the depths of David Lynch’s private Parisian club, Silencio, she took part in one of fashion’s most radical happenings – Dutch futurist Iris van Herpen’s SS14 show, an electric sensory experience in which music was live-sculpted by Legler, Saskia de Brauw and the other models (here termed “collaborating artists”). Audiences were sent into trancelike states by their hypnotic and intimate physical interactions, which generated sounds through the use of touch-sensitive garments. Van Herpen has been creating collections influenced by complex corners of the imagination, biology and the digital world for several years, but SS14 was the season she took it to the next level with an intricate sonic web that was as much about the possibilities of fashion as it was about the power of the female touch. 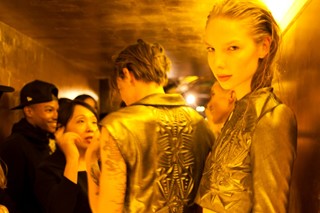 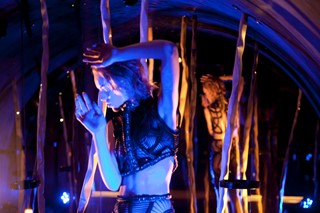 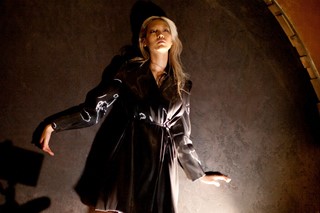 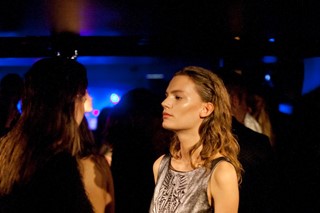 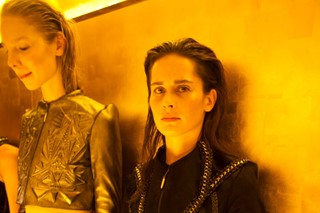 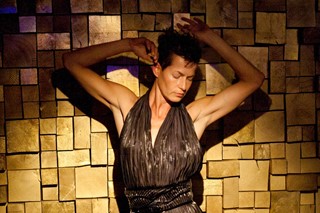 Iris Van Herpen: It’s difficult for me to imagine how my work would look if I were a man. One thing I know is that I’m very intuitive and a lot of my designs don’t come from my mind, they come from a feeling. Sometimes I can’t even remember the process behind designing a garment. It’s just so unconscious, and I think that’s something quite feminine.  I think, in general, men are more rational in the sense that it comes from the brain.

Iris Van Herpen: I am a woman and I can’t even imagine being a man. Growing up, I must say that I never felt disadvantaged being a woman. Of course, there are so many places where there are other systems and ways of seeing women. I was wondering how that is for you. Do you ever feel disadvantaged for  being a woman?

"The term ‘feminism’ has been misused quite a lot. I know its origin and I think it comes from a very good place but for me – and maybe it’s different for other women –  it has the undertone of a swearword" - Iris Van Herpen

Casey Legler: Definitely not. First and foremost I think of myself as a human. That might seem obvious. The fact that  I was born a female is just... I mean, I had nothing to do  with it, right? It was pure biology! I was born into the cultural context and cultural language around being a woman, but what does one do when we don’t necessarily fit into this language of describing things? Honestly,  I don’t think many of us fit into these pre-existing frameworks. One of the things I get excited about in your work is that you’re creating these objects as a result of all these seemingly unrelated spaces, right? For the show I felt like we were given these parameters of sound, body, garment and design and we managed to create this sort of third experience.

Iris Van Herpen: Yes, I feel it was a really intimate performance with even a sexual element that came from the bond you and all those involved created together. That’s something you can’t control. I think it definitely had something to do with the women that were there, and I don’t think it could have been done with men!

Casey Legler: That’s interesting. I never thought about it happening with men.

Iris Van Herpen: I mean, we all worked well together. It was not because you have, I don’t know, the look of a man.

Iris Van Herpen: It’s so much more than that and that’s why I wanted to work with you. Normally I don’t speak in terms of a muse, but you really were the inspiration for the performance.

Casey Legler: It’s funny because if it had been all men, I wonder if people would even be like, ‘Oh, we noticed all these strong men in the same room, kind of serving sexuality.’ It’s like that question would never be asked.

Iris Van Herpen: Exactly! I don’t know how you feel, Casey, but  I don’t really think people are afraid of female sexuality. I do think it’s probably a nature for men to be dominant sexually. Like with the case of Evan Rachel Wood. I definitely think the audience is probably more accepting than these people at the censor boards. What I find strange in this story is that violence is so accepted in movies and something as basic as sex is not. I don’t feel like it has anything to do with fear, but I do think it has something to do with the nature of being  dominant in sex.

Casey Legler: I don’t think it has anything to do with a fear of sex either – it’s about a fear of the loss of money. You know what I mean? It’s something we get really excited about because it involves sex and gender, but it’s really about economics.  And that’s a lot less exciting to talk about.

Iris Van Herpen: I also think the term ‘feminism’ has been misused quite a lot. I know its origin and I think it comes from a very good place but for me – and maybe it’s different for other women –  it has the undertone of a swearword even. I think, maybe,  it’s time for another word – or maybe not even a word. How do you feel? Do you consider yourself a feminist?

“I looked around and was like, ‘Holy shit! There’s no one else  like me. We have a problem'” – Casey Legler

Casey Legler: I’m definitely an avid scholar of feminist theory, but like I said, I consider myself more of a humanist. But asking if ‘feminism’ is a bad word – you know, I wonder if any one of us is asking is ‘capitalism’ a bad word, or ‘misogyny’? Like, should we be modulating how they get talked about? Do we really need to codify it so that it’s more palatable?  It just is what it is.

Iris Van Herpen: At the same time, it’s only women talking about it!

Iris Van Herpen: We need some men in here!

Casey Legler: It’s totally true! I feel very nervous when men are excluded from the conversation.

Iris Van Herpen: People like Malala (Yousafzai) bring to light what the situation is like in some places. It’s not normal that women get an education everywhere. It’s unbelievable that in the 21st century it’s not considered normal to think of everyone as equal.

Iris Van Herpen: I also read an article recently about a Muslim gay man. There are like, 100,000 gay Muslims living in the Netherlands, and in his hometown he would have been hanged if his family found out. He described how he hated himself and couldn’t live with these feelings of guilt.  I think all kids come to a time where they discover their gender and sexuality. Education is important but it’s parents that have the biggest responsibility here.

Casey Legler: But that’s the thing though, not all parents are going to step up. It’s necessary for these conversations to exist in more public spaces. You know, as queers we’ve had to articulate really sophisticated measures around chosen family because many of us are rejected from the biological family system.

Iris Van Herpen: Did you get anything during your education on this subject?

Casey Legler: No way! I had to find my people. I had no language around who I was, and I’m talking about it in a very global way.  I didn’t come across any of that until my early 20s. I remember  I looked around and was like, ‘Holy shit! There’s no one else like me. We have a problem.’

Iris Van Herpen: But don’t you think we all have major similarities and differences?

Casey Legler: Yes, absolutely! I guess what we’re talking about is identity. There was no language given to me around identity, and it kind of took my early 20s and the circumstances that I was in to develop and look for my own family that had the language. And currently my family includespeople like you, right?  I mean, we get to riff off whatever magic we’re coming up with! So I think that’s the beautiful news, right? I don’t think  I’m unique in that struggle.

Casey Legler: Actually Iris, what I’ve picked up in your work is your curiosity around perception. It seems as though you use biology, science and physics as tools to articulate the angle from which you see things. Would you say that’s true?

Iris Van Herpen: Yes. The main goal of the performance was to show the power of touch and the importance of intimacy and movement. Sound has always been so strong to me that it was almost scary to work with it so directly.  It’s always been in the background of my shows. Over the past few years I’ve come to realise that I automatically visualise sounds. I’ve always done it. For me, music is so directly connected to emotion, movement, colour and even creation. Here, I tried to turn it around. Also, usually I think of a model as a canvas for the clothes, but it almost went the other way because the clothes became a canvas for you to play and perform with to create music together.

Casey Legler: Yes, the point was that we were becoming this one organism that was serving this experience of sound and visuals in a pronounced and intimate space, so all of us had to be connected like the genetic sequence of a DNA system.

Iris Van Herpen: Were you even aware of your surroundings?

Iris Van Herpen: I admire that.

Casey Legler: I also love storytelling, and I think that you are a storyteller too, and how you tell stories is different, but this is where I got the hook, right? In agreeing to work with you, I was like, we’re about to tell a really badass story, right  here. And you posit things on the body and I use my body,  so you can’t really ask for a better combination than that.  And on top of it, there’s all this crossover that we have:  I work in sound, you work in sound. We have all these very weird obsessive interests unrelated to the topic. (laughs)

Casey Legler: Was I aware of anybody else that was in the room?  I just knew that we were starting, you know? It was time for  it to happen.