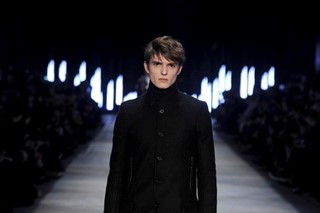 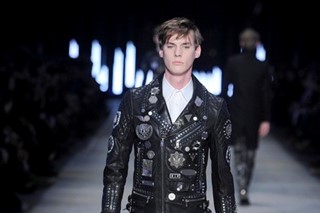 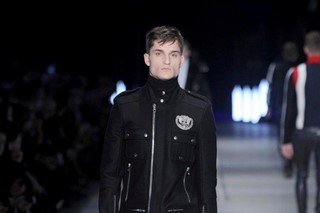 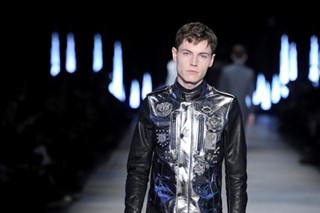 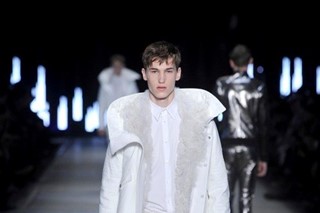 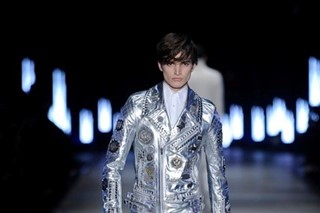 Rigorous military rockers and a precise, high-shine take on Diesel’s rock DNA stormed down the runway for Andreas Melbostad’s debut menswear show at Pitti Uomo, set in the vast space of Stazione Leopolda in Florence and illuminated by thousands of LED sound illusion lights flashing along the walls.

A mix of bass-heavy disco, techno and Prodigy’s Breathe. “Some of tonight’s soundtrack was actually my London days. While I’ve been working on the collection I’ve had big moments of iconic rock music, Depeche Mode and New Order.” – Andreas Melbostad

Skinny denim came disguised in complex surface coating, appearing as patent leather and liquid plastic, and round studs covered every inch of leather on the trousers in the opening look. There was a nod to Nicola Formichetti’s moto badge Diesel Tribute collection, only here badges and insignia came in gleaming metal. Legs were underscored and almost fetishised with pronounced motorcycle stitching to create “an articulated and engineered look”, Melbostad said.

“Being the first menswear for me I wanted to start with things that I felt were at the core of Diesel’s DNA and my own sensibility. For me, the idea of military and the biker is a timeless reference. We looked at a lot of different uniforms, from Japanese officers’ coats to American aviator jackets, but also rockers and bikers, revisiting those pieces. I wanted the collection to convey a confident and tough attitude, injected with a bit of futurism.” – Andreas Melbostad