We explore the hidden codes and symbols behind M.I.A's ‘counterfeit’ Versus collection 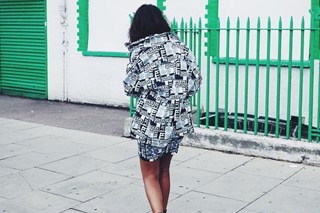 Over the next week, to mark the release of the collaboration, we will see an electric web of M.I.A. x Versus Versace themed articles takeover Dazed Digital

In her recent piece for Dazed Digital on the Versace SS14 show and its Migos and Drake's ‘Versace, Versace, Versace’ soundtrack, Katherine Bernard discussed what ‘street’ means today. “Drake is holding the cultural cards. Street is up here, fashion is down there, and that’s how the creativity flows,” she concluded. And in M.I.A.’s capsule collection for Versus Versace, which hits stores this week, it’s also the street that holds the power and commands our attention – in a brilliantly warped way.

Turning the fashion system upside down, M.I.A has looked to the East London markets she used to visit as a teenager and – more importantly – the counterfeit Versace merchandise she would find there. “Versace designs have always been bootlegged, now it’s Versace bootlegging the bootleg for the bootleggers to bootleg the bootleg,” she notes. Loud and clashing, the fragmented jigsaw prints play on a counterfeit culture vocabulary by altering the interlocking Greek key, the gold medallion and the Versace logo and creating familiar yet unfamiliar emblems, embedded with M.I.A.’s name and references to the dizzying artwork for Matangi, her upcoming album.

Bootlegging the bootleg is a whole other level of meta, where fake is transmogrified to real in an epic disorientation that manages to celebrate Versace and underscore the brand’s position as the ultimate creative power, and also wittily and intelligently poke fun at the brand’s own high fashion game. By re-appropriating counterfeit merchandise – the very bottom of the fashion hierarchy – ideas of high and low, leader and follower and street and salon fashion become even more irrevocably intertwined than they already are today.

But the collection also reveals another interesting layer, namely the fact that Versace’s own interlocking key frieze and its Medusa head are also, in effect, bootlegs – of ancient Greek art. Like a Versace-fied ouroboros serpent eating its own tail, M.I.A.’s Versus concept is the gift that keeps giving.

The Versus collection also highlights another important point: Just like there’s no depth without surface there’s no authenticity without fakes and reproductions.

Fittingly, the Versus campaign lives online, in GIFs of M.I.A. and her friends shot by Jamie Martinez around Whitechapel and Dalston, home to London’s counterfeit markets. Nowhere spawns copies of copies like the Internet, a place where it’s sometimes pretty much impossible to determine what’s real and what’s not. Image meanings are changed through memes, fiction presents itself as fact and pictures are infinitely duplicated and altered until originals and copies become the same thing.

The Versus collection also highlights another important point: Just like there’s no depth without surface there’s no authenticity without fakes and reproductions. In his 1936 essay The Work of Art in the Age of Mechanical Reproduction, good old Walter Benjamin talked about how the aura (as in the magic and uniqueness) of a work of art has evaporated in modern age because art is now reproducible – in posters, prints and souvenir miniatures. You could say that by acknowledging the knock-offs and reproductions, Versus turns this idea on its head. Instead of devaluing the original, the knowing and tongue-in-cheek use of bootleg pieces only heightens our awareness of the special aura of the real thing.