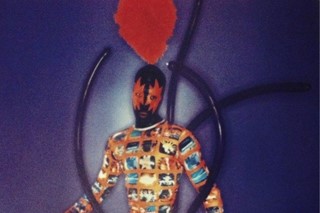 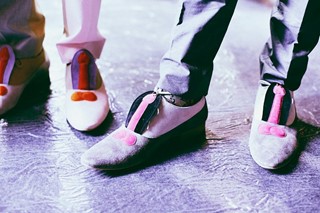 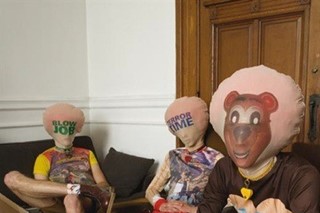 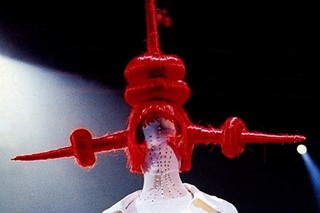 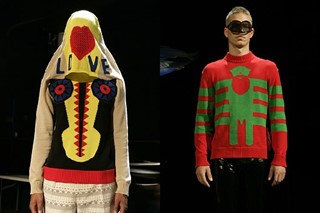 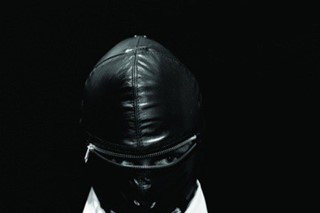 Walter Van Beirendonck isn’t frigid. Sex is a force of creativity for the Antwerp-based designer, slipping charged references into his every collection. At first look, some present as rather innocent; ‘Home Sweet Home’ SS14 cast a sleekly tailored range of suiting with artful representations of Van Beirendonck’s home décor – a dinner jacket featured a couch print, carpet patterns spread their way across trousers and t-shirts and baseball caps were cross-bred with wicker baskets. But there had to be something anti-virginal amongst all this surreal suburbia. It took shape as a series of suede and metallic snakeskin brogues decorated with colourful phalli – a nod to Gabriele D’Annunzio, an Italian dandy who lived a flamboyant life around the turn of the 20th century. Famous for his poetry, war exploits and voracious sexual appetite, D’Annunzio was a hero and five-star lover who advertised his bedroom prowess via penis-emblazoned shoes.

Like D’Annunzio, Van Beirendonck doesn’t shy away from sartorial explorations of sex and politics. Far from it: over the past three decades, the designer has used fashion as an instrument through which he can research and test the boundaries of a world of controversial subjects. His collections reference everything from gender, fetish, beauty, ritual, ethnicity and politics to voodoo, toys, spacecraft and aliens, each subject tied to the next in a vortex of intelligent design.

Phallic shoes may seem way out, but Van Beirendonck’s heaviest concentration of sexual references dates way back. Meeting American photographer Robert Mapplethorpe as a young designer likely catalysed many of his fetish-inspired creations. Mapplethorpe’s work flickered between classic portraits, floral studies and graphically sexualised images of men; a mix echoed in Van Beirendonck’s application of colour and knits to hardcore styling. Bondage and S&M were early influences, from the long latex jackets and muzzle headwear of his ‘Sado’ 1984 collection to ‘Paradise Pleasure Productions’ Autumn Winter 1985-’86, also known as the rubber show. The latter was immortalised by Jean-Baptiste Mondino who captured models posing with balloons and a blow-up sex doll. As you do.

Van Beirendonck’s breakthrough came in 1987 when he was touted one of ‘The Antwerp Six’ alongside the likes of Dries Van Noten and Ann Demeulemeester. Two years later came ‘Hardbeat’ AW89-90, a hardcore mix splashed with slogans like ‘Fetish for Main Course’ and ‘Great Balls of Fire’ and accessorised with bondage paraphernalia and latex jackboots. No safe words here.

At the same time, safe sex has always been one of Van Beirendonck’s strongest messages, his designs often accented with red thread as a tongue-in-cheek reminder to stay protected. And while designing the W&LT label for Mustang Jeans Group in the 1990s, the designer used fashion as a soapbox for communicating the destructive power of AIDS. ‘Killer/Astral Travel/4D-Hi-D’ Spring Summer 1996 saw whoopee cushion-shaped masks splashed with slogans like ‘Terror Time’, ‘Get Off My Dick’, ‘Synthetic Hell!’ and ‘Blow Job’. Designing under Mustang also gave Van Beirendonck the financial freedom to experiment with new materials – rubber, latex, plastic; intelligent clothing even complete with scent – materialising as full body suits, elaborate masks and appliqué rubber nipples.

These bodily mutations also highlight Van Beirendonck’s fascination with customary notions of beauty and society’s wacked obsession with the body. Where the likes of body architects Lucy McRae and Bart Hess capture manipulated bodies as still life, Van Beirendonck pushes the concept in front of our eyes, in motion on the runway. Casting bodybuilders and chubby bear types alongside waif-like, fragile boys, its ‘masculinity’ one minute and androgyny the next. Then there’s the bodily manipulation; take ‘A Fetish for Beauty’ Spring Summer 1998 where stilts elongated legs, gas masks deformed faces and spiked green gloves turned biceps into weapons. In the same collection, t-shirts were adorned with preoperative drawings for plastic surgery.

No matter how heavy the message, humour underlines Van Beirendonck’s means of expression. Giant yellow cock masks? OK. Teddy bears equipped with little penises? Absolutely. Just as D’Annunzio’s shoes downplayed swagger with irony, each collection mixes vivid with surreal, brash with subtle, hardcore with softcore. In Walter’s world, there’s always something new to uncover and clash. The trick is how to get the message across.