With the ultimate summer party in mind, Samson brings out the beach boy in his branded models 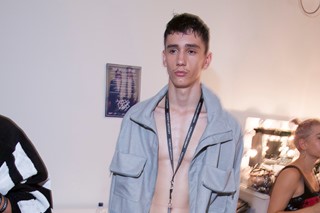 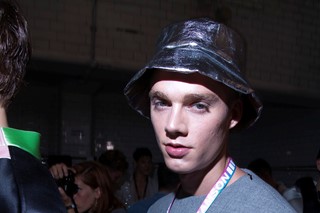 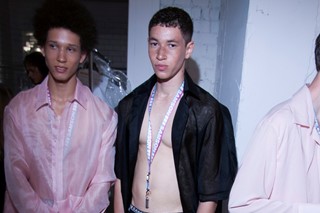 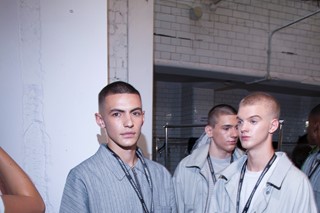 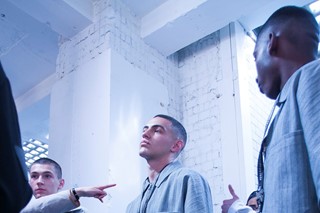 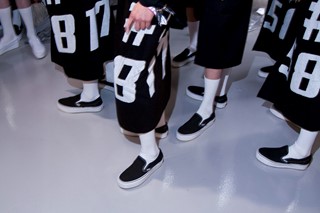 This season felt like a big progression for Samson. His previously heavy, oversized streetwear had developed into something rather feminine and quite delicate. Thick felt was replaced with silk organza and glitter covered knitwear, whilst his at times monochromatic colour palette was replaced with a series of light pinks, greys and a metallic silver. “It was a lot about branding this season,” explained Samson backstage. In the past he has shaved his name into the back of his model’s hair and stencilled them onto skateboards, but this season – his most accomplished to date – he branded the Samson beach boy, complete with towels which were wrapped around his model’s waists and lanyards covering their wrists. Backstage we caught up with the designer to find out more:

Dazed Digital: There seems to be an almost feminine feel to the collection this season, especially with the glitter details. Was this something you had in mind?
Shaun Samson: The glitter jumpers were a collaboration with a French company and they actually supply knitwear clothes to the military in France. It was nice that they are going for a more fashion forward look and collaborating with New York designers like me who don’t have the ability to do interesting knits. They do it well and technically they can achieve more interesting things than I can with knits.

DD: Did you feel that there was a progression with the colours and the fabrics this year?
Shaun Samson: I don’t think about that. I just do what I feel like doing and it reflects whatever mood I’m in that season. If I’m missing California then I think the collection will feel more California. I was referencing the ultimate summer party for this collection. My birthday's in the summertime too and the first georgette and silk organza looks reminded me of piñata fabric. That’s why I was looking at those. I liked the way it flowed and that kind of contrast of this flowy pink and full-on look with a Kendrick Lemar soundtrack. It’s fun and interesting.

DD: What about the towels and the details?
Shaun Samson: The towels and the lanyards are quite handy. Like when you were a kid and you had those plastic beach things that hold your coins - it's kind of an adult version of that. Then we blinged up the hardware so they resemble metal clasps. One actually says my name: S H A U N S A M S O N. This collection was a lot about branding this season.