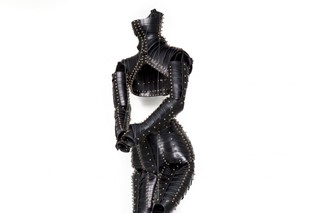 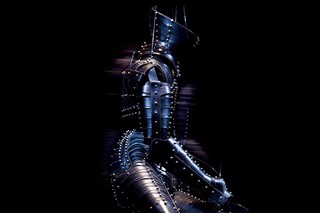 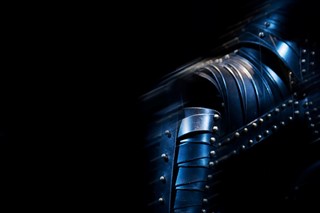 In Greek mythology, Pelops, grandson of Zeus, is awarded an ivory shoulder after the feisty goddess of agriculture accidentally eats his. It’s a tale that links the concept of prosthetics with advancing and adding to a body, a far cry from the term’s modern link with disability and loss. Today, artist Úna Burke designs adornments that enhance and shield, using traditional leatherworking techniques to craft armour for contemporary warriors of society.

Burke’s latest project sees her collaborate with SHOWstudio on a short film and installation that explore prosthetics in idea and form. Alongside pieces from Burke’s RE.TREAT collection, the SHOWcabinet exhibition features the work of designers including Ana Rajcevic and Patrick Ian Hartley and prosthetic legs courtesy of Aimee Mullins, who covered Dazed in 1998, shot by Nick Knight for an issue guest edited by Alexander McQueen. Exhibition underway, Burke took the time to share an insight into the thinking behind her multi-layered work.

Dazed Digital: What attracts you to armour and bodily adornments?
Úna Burke: For me, it’s about the strength and power it exudes as well as the protection that it gives to the wearer. Having studied armour closely in both the Wallace Collection in London and the Palace Armoury in Malta, I observed the many incredibly clever closures and various other functioning mechanisms. I am intrigued by the irony of the contrast between their inherent beauty and the destructive terror that they were used to inflict.

DD: What materials do you mainly work with?
Úna Burke: Hundreds of panels of vegetable tanned leathers which are hand-cut and joined with brass fittings and screws. Depending on the item, [the process] can take between hours and days for the fashion pieces and then weeks to months for the art pieces.

DD: How fine do you believe the line is between wearable art and fashion?
Úna Burke: I believe in wearable art as a sector of the fashion industry, perhaps a newly defined category however. McQueen, Mugler and Chalayan have been using these types of pieces on the catwalk for years, pieces that would not be considered to be wearable in a conventional retail environment. Wearable art is, in my opinion, just a process of exhibiting these pieces as objects in their own right so that their intricacies can be appreciated in a more intimate environment.

DD: Can you share a highlight of putting together the exhibition and film?
Úna Burke: Early on in the project Niamh [White, SHOWstudio Curator], Marie [Schuller, filmmaker] and I went to see a wonderful puppetry show in Battersea and afterward we got chatting with Lyndie Wright, from the Little Angel Theatre in Islington.  She invited us to her workshop to see her puppets, helping me to understand the movement of the body and the specific pivot points to attach the strings to in order to have balance and ultimate control over the puppet while we were filming.

DD: How did you operate the film’s puppet?
Úna Burke: Marie was fantastic to work with; guiding the lighting technician while simultaneously directing the three of us that it took to manoeuvre all the limbs of the puppet.  We had scaffolding installed in the theatre in order to be able to operate it from above and under the guidance of our highly skilled puppeteer collaborator Raven Kaliana we managed to get great movements.