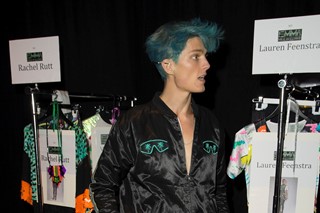 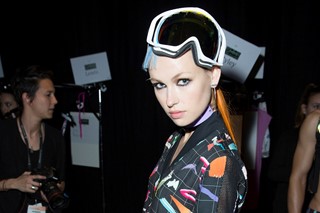 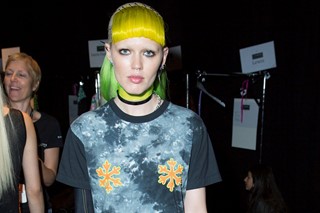 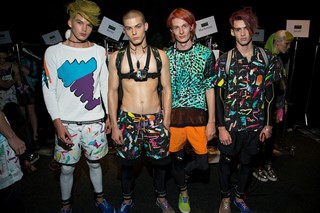 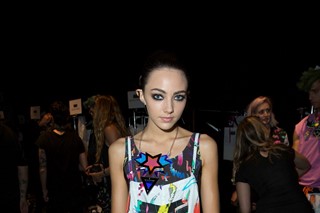 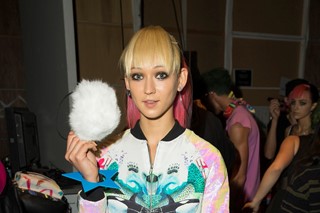 When we spoke to Emma she talked about her childhood living between Ulladulla, a small surfing town south of Sydney and Canada where weekends and holidays were spent Ski-ing, these opposite environments have somehow collided in this her fifth collection. Emma’s obsession with all things bright and bold continued into this collection with prints inspired by the squiggle prints found on most 80 & 90s ski wear, in particular skis and ski boots. Other prints and motifs which appear in the collection are polar bears, killer whales, palm trees and a rainbow trout print all bringing surf and ski culture together in a vivid mix of neon, metallic and graphic black and white.

Dazed Digital: Those hair stencils were cool…
Emma Mulholland: They were by Alan White for GHD and his team. It was really quite groundbreaking and took them I don't know how many attempts before they worked out how to make them stay put! It was a really amazing feat, we were all so excited about it.

DD: Have you ever been on Spring Break in the USA?
Emma Mulholland: I’d love to but haven’t. I’ve always loved movies about it, there’s a really good 80’s one called Spring Break and it even appears in Jaws. I am really excited about Harmony Korine’s new film.

DD: Where are your clothes stocked?
Emma Mulholland: Eight stores in Australia and one in New York. I’m hoping to grow this more and want to focus on the Japanese market. I was just part of a pop-up store in Tokyo for Elle Girl Japan which went very well.

DD: What's your favourite piece from the collection?
Emma Mulholland: The first t-shirt in the show worn by Julia Nobis, it’s a black tee with sequin palm trees and snowflakes.

DD: We spoke to you two years ago when you were part of a group show at Mercedes Benz Fashion Week Australia, what’s happened since then?
Emma Mulholland: I was just starting out then with womenswear and since then I’ve added menswear into the collections. Have been developing that along with the swimwear and generally building up my whole line so I can now do solo shows. Last year I did a short film and a collaboration with a store in Paris so I’ve been keeping very busy.