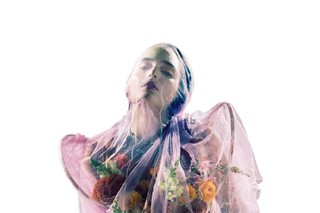 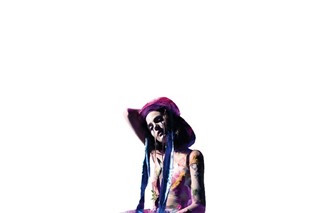 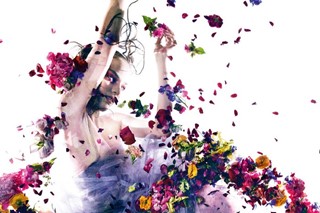 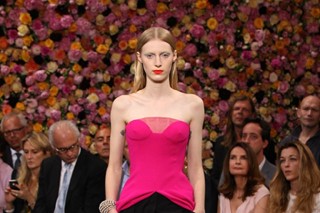 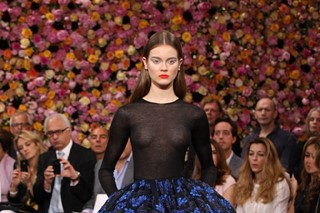 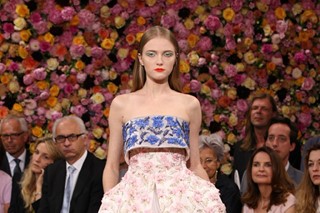 Raf Simons hadn't even shown a single silhouette at at the Dior haute couture show back in July and already people had formed an impression of what they were about to see as they entered Parisian hôtel particulier with the walls of five rooms covered in peonies, goldenrod, dahlias, carnations, delphiniums and all sorts of roses. Once again, Simons had called upon his friend florist Mark Colle, based in Antwerp to help him realise this memorable set for his debut at the house - a symbolic floral arrangement of "exquisite mayhem". Colle, who runs the flower shop Baltimore Bloemen and has created arrangements for the likes of Ann Demeulemeester and Dries Van Noten, also made an impact with his perspex boxed in bouquets at Simons' last show for Jil Sander. Colle's arrangements at these two fashion shows weren't merely present for pure decoration. They were there to be analysed, interpreted and of course admired for their beauty. Antwerp's solid fashion scene has given a new context to Colle's work as a florist and in addition to doing arrangements at shows, the art of his floristry can also be seen in an editorial context such as Dazed & Confused's Fade into You shoot by Pierre Debusscherre. We speak to Colle about how he got into his blooms, working with Simons as well as the relationship between fashion and flowers.

Dazed Digital: When did you first become interested in floristry?
Mark Colle: Interested? I'm not sure. I always knew I wanted to do something creative. I wanted to go into advertising but I got fed up with going to school and quit when I was 15. I started helping out at my parents' local florist and since then I've never done anything else but working with flowers. Honestly, it took me a while, but it really became a passion.

DD: How did you begin Baltimore Bloemen and when did you first start working with fashion designers on their showrooms and events?
Mark Colle: It was just a logical next step. The shop in Antwerp I was working in closed, and some of their customers encouraged me to start my own business. At first I thought they were mad, but after a while I decided to just take the plunge. I guess I had developed my own style by that time, which appeared to be very appealing to the people in fashion and that's how it started.

DD: The flowers at the last Jil Sander show by Raf Simons felt celebratory and funereal at the same time - what was the significance behind the arrangements and the choice of flowers?
Mark Colle: They were there to represent a day in the life of a woman. Ultra feminine, fragile behind glass, a touch of mid-century couture but interpreted in a modern way.

DD: Tell us about the process of creating the rooms for the Dior couture show - it must have been a huge task!
Mark Colle: It was exquisite mayhem.

DD: What was Raf Simons's brief for that show?
Mark Colle: To create a garden feel, a homage to Christian Dior and his passion for flowers, for gardening. To shape a romantic, feminine world.

DD: Why do you think the relationship between flowers and fashion has remained so alluring - for instance in the shoot you did for Dazed and Pierre Debusschere, the set at Dior (which got a lot of attention) as well as in the past when flowers and fashion designers have come together in shows and in design?
Mark Colle: I don't know. They grow, they bloom, they fade. You can't hold on to them for ever. Fashion is like that too in a way - it comes and it goes. They are symbolic for richness, romance. They capture people because of their smell, their appearance. They enhance emotion, create emotion even. Just like fashion does.

DD: Without meaning to sound cheesy, what IS your favourite flower?
Mark Colle: Dahlia!

Click HERE to view Pierre Debusschere and Robbie Spencer's 'Fade into You' film, with flowers by Mark Colle