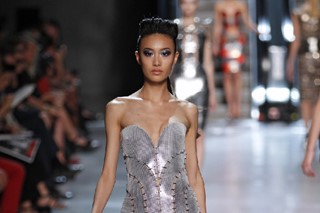 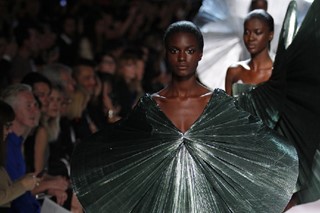 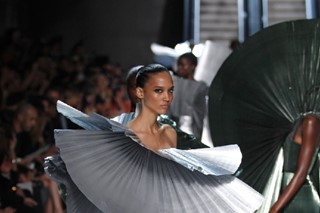 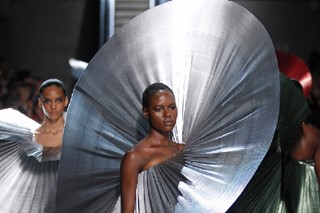 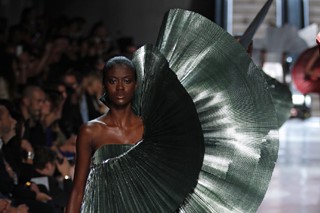 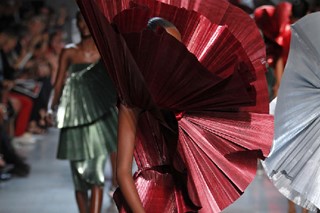 It served Manish Arora to begin by exploring Paco Rabanne's most famous 1966 rhoidoid dress by creating a version made out of silver python.  This was the starting point that then led Arora to articulate what his vision of Rabanne in this debut collection.  Arora did a lot of meticulous research and found his own aesthetic to resonate with Rabanne's but in this collection.  He saw the Paco Rabanne woman as a femme lumiere, a woman freed by her own clothing and in addition to the archives, architecture, art and the natural world were all sources of inspiration too.  Whatever material created a shine - fibre optics, iridescent silks, moire, degrade mesh and other specially treated fabrics - Arora applied in a collect, which harked back to Rabanne's use of unusual materials.  Where Arora does differ from the brand's namesake though is the silhouette which was altogether more structural.  Curves snaked around a woman's body with the hips rounded off, the waist nipped in and shoulders emphasised.  The final passage of metallic paper dresses - pleated, folded and constructed until you had discs of paper encasing each woman was again pure Rabanne reminding one of a scene in cult film Qui Etes Vous Polly Magoo? where models walked out in sheets of folded steel.  Conceptual fashion in the sixties was all well and good but how does it stand up today?  Arora's debut made for an eye-catching show but the true test will be in future collections when we'll find out whether there is a place in fashion for a revived and reinterpretation of Paco Rabanne.