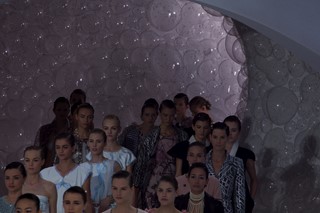 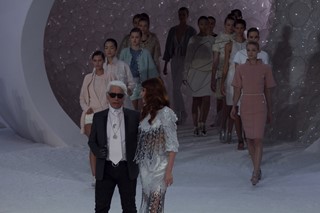 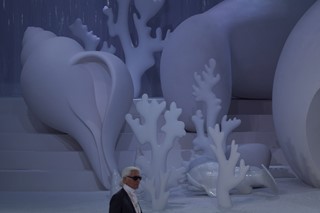 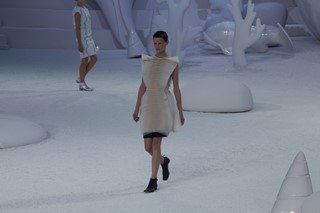 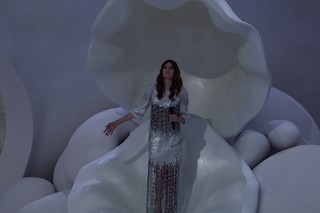 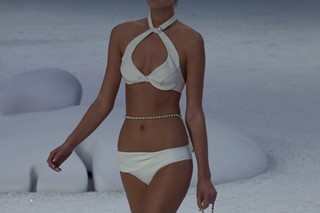 'What The Water Gave Me' was the song that Florence Welch sang from a pristine white seashell in what was another extravagant set on Chanel's part.  The water, particularly the subterranean regions of the sea, gave Karl Lagerfeld a whole mine of references to inject into his collection. Where Lagerfeld has sometimes gone down the literal route of a theme in a collection, this time round, where you could have gotten mighty cartoonish (Little Mermaid anyone?) with a theme like the sea world, what Lagerfeld did was ensure everything was as ephemeral and to-the-point as could be.  The pearls that Mademoiselle Chanel was so fond of were broken down, used in singular form as though they had just been found in their oyster shell and scattered on to the models' ears, on their nose sometimes and down their back, the mark of Lagerfeld's sea goddesses melding with creatures.

With 85 looks, there was a lot to get your head around it yet nothing sunk to the bottom of the sea bed with heaviness.  The street savvy sensibility of last season's apocalyptic viewpoint lightened up into slouchy tweed suiting and knitwear with graphic lines drawn on in some places, again paired flat shoes to emphasise the clothes' modernity.  Poseidon's kingdom gradually took over in subtle ways - seaweed washed up on the shore drawn up as a print, iridescent sequins embroidered to resemble the inside of a shell, feather light PVC coated to look like pearls, organza cut up into fish scales, seaweed strands printed onto clear patent jackets - the list went on and on and despite the number of looks, you didn't want those frothy concoctions to stop streaming out of the hollow shell. Lagerfeld's sea world also largely took on a dreamy pastel palette which only accented each moment of shimmer and shine.  Shapes mostly consisted of drop-waisted or shift dresses, flared out skirts, boxy jacket shapes as per Chanel's house codes and they were the apt structural foundations to carry off all of that surface detailing.

By the end as Welch's voice boomed through the Grand Palais, you couldn't help but feel completely in awe of Lagerfeld's ambition when he could have sat back and rested up on the laurels that the has achieved over the past 20-something years at Chanel.  Speaking of years, Lagerfeld's tenure at Chanel will have reached 30 years in 2013.  Something as magnificent as the show we saw only makes you wish he could go on beyond that 30-year point.