With the news that Justin Bieber is lining up for his own piece of the beauty pie – teaming up with Schmidt's Naturals to create a vegan, plant-based and cruelty-free natural deodorant called 'Here + Now' set to be released later this year – we take a deeper delve into the world of natural deodorants.

When it comes to your body care regime, applying deodorant is neither the most indulgent, nor the most remarkable part. And yet, over the past couple of years, the beauty industry has been obsessed with armpit maintenance, specifically, natural deodorants.

Once a niche for the granola lovers, it’s now officially become cool to take a more organic approach to underarm care. As millennials become increasingly aware of potentially harmful ingredients in skincare products, they’re becoming increasingly cautious of what goes on to their bodies and how that affects the environment. This means there’s been a rising demand for clean and green beauty alternatives, in fact, the natural body care and beauty market is expected to reach $25 billion by 2025.

As brands have started seizing the sustainable hype, natural deodorant has become the latest cause célèbre of body care. “Natural deodorants started spiking interest in the last five years, but only really gained popularity in the last two to three years when more sophisticated and affordable options were on offer,” says Emma Chiu, Creative Innovation Director at JWT Innovation. “According to a Mintel report, sales of natural deodorants in the US increased by 12% last year reaching $42 million, and this number is expected to grow year on year. Natural will be the new normal.” US brands like Corpus and MegaBabe (which annoyingly aren’t yet available in the UK) offer chemical-free formulas that come in chic, millennial-friendly packaging and sell out immediately - MegaBabe’s offering even boasts a 13,000 person waitlist. Schmidt’s, the reigning champ of natural deodorants, was bought by Unilever in 2017 and last month Dove launched its first aluminium-free deodorant worldwide. Considering that natural deodorants can be ten times the price of your mainstream antiperspirant (an Aesop one retails at £23 vs. £2 for Sure), why is everyone suddenly chucking their aerosol antiperspirants in favour of a more wholesome option? 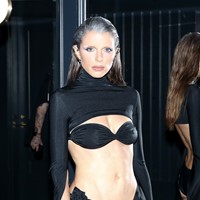 “Across the beauty and hygiene industries, we’re seeing the shift in natural products moving from niche to mainstream.” – Emma Chiu

“It’s the Goop effect,” says Chiu. “Across the beauty and hygiene industries, we’re seeing the shift in natural products moving from niche to mainstream. Consumers would go as far as using food ingredients to make homemade beauty treatments because they’re more natural than products found in stores. Beauty brands are taking that homemade stress away from consumers by providing natural and clean products. It started with skincare, haircare, and now moving into hygiene products which include tampons and deodorant.”

Mainstream deodorants contain aluminium, which also officially classifies them as antiperspirants. While antiperspirants keep your pits dry by blocking your sweat glands, deodorants allow you to sweat while simply masking the odour caused by bacteria in our skin mixing with the sweat (which is why a good deodorant will have antibacterial properties). Although aluminium is a naturally occurring substance, it’s a controversial one. There’s a long-standing rumour that it causes cancer. Some studies have found a (tenuous) link between antiperspirants and breast cancer and even Alzheimer’s. However, this is rocky at best. The National Cancer Institute, National Institutes of Health, FDA, Alzheimer's Association, Cancer Research UK, and even the EU’s Scientific Committee on Consumer Safety (which has banned thousands of personal care ingredients) all confirm there is no conclusive evidence that antiperspirants cause cancer.

Even though there’s no substantial proof that mainstream antiperspirants are harmful, they do prevent a completely healthy process from occurring. “Sweating is an essential bodily function that must be performed so that you can expel heat from your body and keep your organs at a healthy temperature,” says consultant dermatologist at The McIndoe Centre Dr Bav Shergill, adding that sweat also gets rid of toxic byproducts present in your system. “By preventing your body’s attempts to rid itself of toxins and regulate temperature, you could be causing long-term health issues such as allergies, sensitivities and diseases.”

“For those of you thinking of making the switch, you should know it won’t be smooth, because your pits will need a period to recoup from all those years of congestion, and detox.”

For those of you thinking of making the switch, you should know it won’t be smooth, because your pits will need a period to recoup from all those years of congestion, and detox. “Once you stop using antiperspirant, it will take roughly two weeks for your body to purge itself of aluminium and other chemicals,” Dr. Shergill tells Dazed Beauty. During this pit purge, you’ll likely smell worse than you did before, which is why natural deodorants get a rap for being useless. There’s clearly something to the phenomenon because brands have started catering to this weaning-off period. Lavanila sells a detoxing underarm mask, while Kaia and Boscia offer deodorants with charcoal, an ingredient that purportedly draws out the residual aluminium faster than your body would on its own.

So, yes, they might make you a bit smelly for a bit, but they’re ultimately better for your health and better for the environment. But which brand to go for? Here we tried out some of the best, so you don’t have to.

With its signature musky “herbaceous” and “camphorous” aroma, this is the kind of deodorant that will make you feel like you have your shit together. It did the job throughout the day but didn’t pass the overnight test and I woke up smelling pungent, for lack of a better word.

I had high hopes for this one since it’s a multi-award winning formula. The cream-to-powder consistency was a nice surprise, and because it contains arrowroot it absorbed moisture longer than the others did (although that didn’t last long). While it doesn’t make for a speedy application it left my pits smelling like lavender, which they regrettably don’t on their own.

I was pleasantly surprised by this one because it managed to survive a weight-lifting session in the gym, a tough feat even for your average mainstream formula. It’s also a great option if you want your pits to smell like a Soho House bathroom.

This is the closest to a mainstream deodorant I’ve come across, and the fuss-free roll-on application was a plus. As eucalyptus has antibacterial properties, it did an excellent job at fighting BO and kept me fresh the whole time, but the smell reminded me of Vicks vapoRub. Not unpleasant, but oddly unsettling without the presence of a chesty cough.

Neal’s Yard reign supreme when it comes to high-end, green body care. Although it smells heavenly, I found myself having to re-apply during the day so its odour-masking abilities left me underwhelmed. However, it might be a good option for the less sweat-prone, which I am not.