As MPs voted on an increase in tuition fees, our reporter joined the protesters heading for Parliament Square 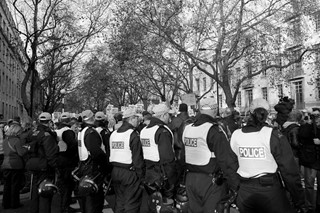 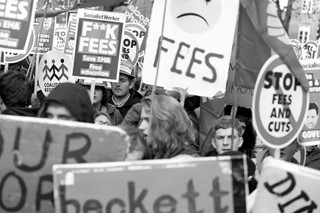 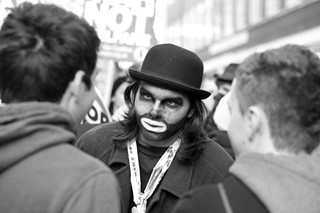 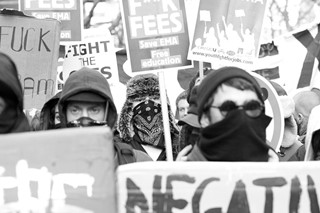 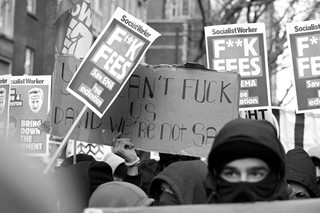 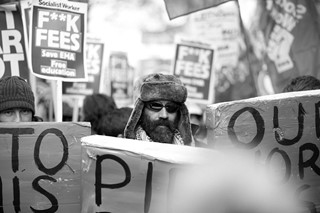 Hollow winter skies gripped Westminster last Thursday afternoon as the House of Commons voted on rises in tuition fees. Outside, 10,000 students and 2,000 police gathered for the decision. Things were tense from the beginning and seconds before the riots started I’d escaped the kettle in Parliament Square and was standing next to a reverend in a black robe by Westminster Abbey. “It’s been pretty quiet all day,” he said, facing the line between protesters and police. “The weather’s been too bad for anything serious to happen so far, and we haven’t even had to close the Abbey yet, either. But the only thing I really care about today is that there isn’t any trouble, because it just won’t help anyone’s cause.”

That was about 2 pm. Around thirty minutes later, however, I was running past the same spot and now riot police were wielding truncheons. What had happened in the interim period reads like a violent farce: some of the protesters had broken through a sheet metal barricade that was preventing people from leaving. Those who escaped joined others in surrounding the police behind them. Then mounted cops arrived; then special constables with nightsticks; then more surges from the crowd and chants of “Whose Streets? Our Streets!” as police on horseback repeatedly stomped the front line whilst two grey haired women were dragged from Parliament Square and openly beaten to the floor... No doubt they deserved every last boot lick. Hell, even the vicar would have probably been a “legitimate” target for a shit-raking had he not bolted to the abbey for refuge. Justice, here, was brutal and indiscriminate.

Sheltering across the road by The Queen Elizabeth Conference Centre reading Twitter updates discussing the ballot, I noticed that some people were also republishing an unconfirmed story that 19-year-old journalist, Jody McIntyre (who has cerebral palsy and uses a wheel chair), had been assaulted by police in Parliament Square. If true, then his alleged assault should remind people that in order for the police to behave like that, certain conditions must first exist.

And what might these be? To look, in recent times, at the case of Ian Tomlinson, a newsvendor who died at the G20 protests in London last year after he was pushed to the ground by a police officer, one answer appears: police impunity. It is not simply the case that police posses the authority to operate in such a way; it is that they are able to do so without the threat of reproach from the legal system. According to David Cameron, demonstrators arrested on Thursday will face “the full force of the law.” But will police be confronted with their behaviour using jail terms and similar tones of condemnation? These are cold days in hell, indeed...

Elsewhere there were brief moments of comic relief. Playing cat and mouse with Chelsea art students and the old bill in and around southwest London being one… Seeing a cardboard shield painted to look like Guy Debord’s anarchist textbook, The Society of the Spectacle, deflecting a truncheon blow, another…

Earlier on Tuesday, I’d attended the meeting at a gallery space in east London where some of these shields had been made. Inspired by the Italian protests where students in Rome had sprayed the names of famous books on thick panelling, these objects were manufactured by demonstrators in London to draw attention to fact that cuts in education spending don’t just represent a financial assault, but a general attack on thought, too.

Across the city that night there were other workshops as well, some of which were held in the university buildings being occupied by students, such as those at UCL, Slade and SOAS, which I visited on Wednesday morning, and discovered a mood of jubilation and fear. At Slade, the students said that they’d received no free legal aid in their fight against eviction and possession orders. This was the same for the protesters at UCL and SOAS, none of which could extinguish their enthusiasm.

“The question is now, when do we end the occupations?”, asked Feyzi, a 36-year-old PhD student at SOAS. “We don't want to end the movement, but people are getting tired. We're going into our third week and we don't want it to fizzle out, but on principle, we do not want to live in a society where we are paying billions of pounds for war when we’re cutting back on education and health, either. This is what everyone is really angry about, and why we’re all making the connection with the wider Tory agenda. And there’s also this feeling, now, that we can turn things around even if the vote goes the wrong way, tomorrow. Nothing is taboo anymore, not even the subject of free education.”

As it stands, the issue of how to continue with the occupations was given a swift response when their occupiers at UCL and Slade were issued with a legal notice on the morning of the demonstration. Whatever the case, the overriding sentiment from last week is that despite parliament’s decision to accept the tripling of tuition fees on Thursday evening, things are only going to get grimmer. Fundamental to the demonstrators’ attitude following the weeks since the trashing of Tory HQ, is that the student movement’s philosophy has grown from being a simple crisis in neo-liberal values to a critique of those values themselves. The kids are no longer complaining about having to stump up more cash, but are turning on the public sector cuts that have the potential not only to decimate institutions, but society itself. This is why the government is running scared and using draconian measures to prevent a situation where the unions mobilise with the students and open up the gates of hell, nationwide. For now, what remains uncertain is just how far either side is prepared to go with this, and where.