The New York actress and filmmaker on channeling a feminist lens, her wild childhood imagination and evading the male gaze on screen

Greta Gerwig has a specific way of delivering her most impassioned points, where her typically slow-moving, stoned-sounding vocal inflection swells into wide-eyed declarations, dreamy but definitive, long-winded and full of heart. They last for a certain length of time and then they’re over, from zero to ten and back in minutes flat. It’s a sort of understated enthusiasm that ebbs and flows throughout our conversation when I meet with the 31-year-old filmmaker for a late lunch in the West Village on a blisteringly hot July afternoon.

“When you’re writing a screenplay, it’s like you’re dreaming the film for yourself again and again and again until it becomes almost like a memory before you make it,” says Gerwig, who channels the highs and lows of young adult life into her craft with a rare, candid poignancy, working behind the camera as well as in front of it. “It’s rapturous, but it’s also terrifying…because nobody in the world asked for this. Nobody in the world cares if it doesn’t exist. You have to either believe in this fiction hard enough for it to become real, or you don’t, and it won’t. Sometimes it feels like shouting into the void. That’s why it’s so exciting when someone shouts back at you.” 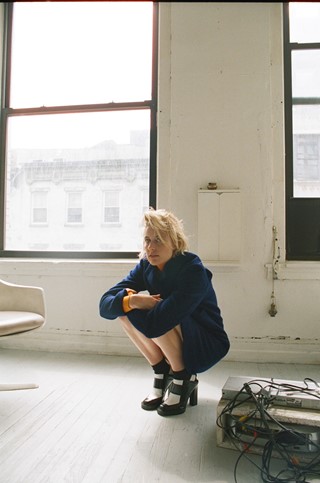 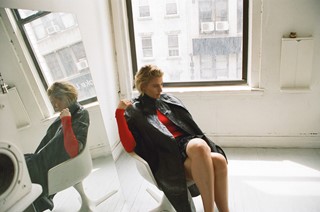 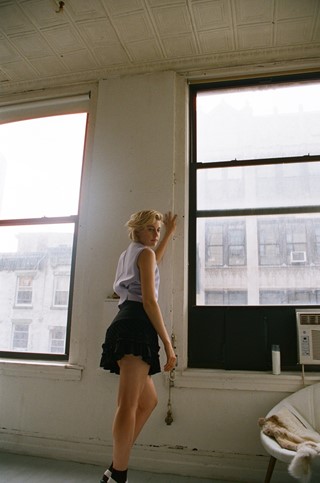 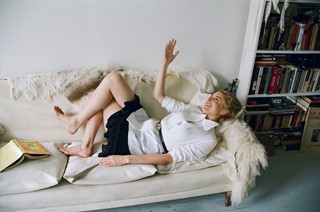 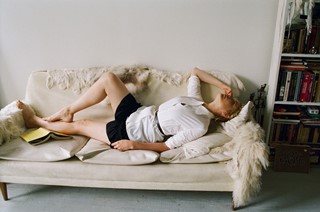 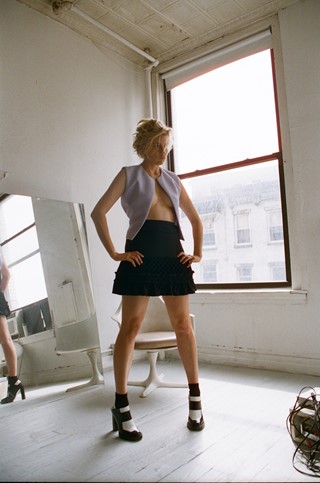 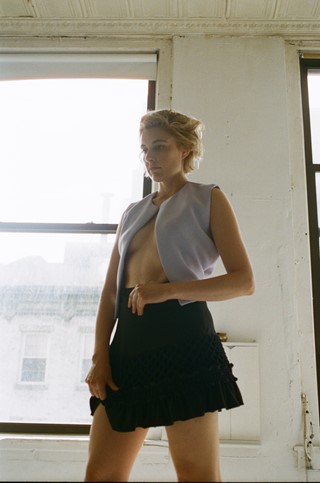 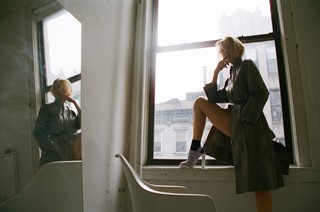 Gerwig’s dynamism is uniquely her own – and it comes through in her characters too. In this moment of conversation, I’m reminded of the scene from Frances Ha, where Gerwig’s character, Frances – a 27-year-old aspiring dancer who is relatable in her clumsiness – finds herself at a dinner party amongst adults with actual jobs and spouses and houses, and intricately details a type of eye contact that she knows means true love. “It’s when…you’re at a party but you’re both talking to other people and you’re laughing and shining and you look across the room and catch each other’s eyes,” she gushes to the bemusement of everyone around the table. If you’ve seen the film, you know the scene, the spirit.

Acting in independent films has been Gerwig’s livelihood since her early 20s (her appearances include 2010’s Greenberg, 2011’s Damsels in Distress, and a scene-stealing turn in 2009’s The House of the Devil). But Frances Ha marked her arrival as a writer, introducing of her distinct voice and vision to a wider audience. This month, she shared her latest major creative vision, Mistress America, which she wrote and directed with her partner, filmmaker Noah Baumbach. She’s also in demand for her acting work just now: she’s shooting a new film with Todd Solondz, Wiener-Dog, wherein she plays a character based on Dawn Wiener from Welcome to the Dollhouse, all while getting ready to work on Mike Mills’ forthcoming 20th Century Women, where she’ll star as a 70s punk photographer. (She’s spent the summer playing around with vintage cameras in preparation.)

Mistress America centres on the relationship between Tracy, a disoriented college freshman in New York City, and her soon-to-be stepsister, Brooke, played by Gerwig. With Tracy aimless in her new neighbourhood, her mother recommends reaching out to Brooke, who she is quickly in awe of; Brooke lives in Times Square, sings on stage with her friend’s band, teaches spinning classes and is opening a restaurant. Brooke is “hilariously inept, but dazzling to a younger person,” according to Gerwig.

Though Mistress is more of a straightforward comedy, there are bits of Frances Ha-the-character’s spirit that turn up in both Brooke and Tracy: in their self-consciousness and relatable imperfectness, fumbling through their different lives in New York.  Like Frances, the plot is not necessarily as important as the interactions between the brilliantly nuanced characters, whose depth in rarely paralleled in films focused solely on female relationships.

“I’m interested in characters that have just a touch of madness,” says Gerwig. “I believe Brooke has a bit more madness than Frances. But there are similarities, too – they don’t have their hand on any kind of moderation. It gets of out of their control.” Does that attraction to madness come from Gerwig’s own life experiences? “I have no idea,” she responds quickly. “I wish I had an answer for that.”

Gerwig grew up in Sacramento, and describes her younger self as weird, competitive, intense, but happy. “I was always living at a ten, emotionally,” she says, before recalling a childhood story where her parents had to pick her up from a birthday party early, because she threw a tantrum when another girl claimed to have more imaginary balloons than her. “I was beside myself weeping. My mom asked me, ‘Why didn’t you just imagine more balloons?’ And I said, ‘That’s not the point. I have stronger feelings than other people.’”

“I think that’s been a kind of continuous theme,” she continues. “I have very intense feelings of joy or sadness. I used to not like that so much because I was worried it was girly and I wanted to be more stoic. I think this happens a lot. When you’re 16, there are qualities you wish you didn’t have, and then when you’re 30 you’re like, ‘Thank god I have that otherwise I’d be living less vividly’. You only get one life so you might as well feel all the feelings.”

Indeed, Gerwig – a self-described extrovert – has affinity for both minimalism and maximalism but rarely the space between.

The name Mistress America is kind of mysterious, kind of sad, and kind of funny – exactly what Gerwig hopes the movie is.  It is also the name of a short story that Tracy ultimately submits to a Barnard College journal, written about Brooke but revealing too many details, leading to a rift in their friendship. “You fall in love with your mentor and then you betray them,” Gerwig explains. “That’s a pretty universal story, I think. But I had never seen it between two women in quite that way.”

Frances Ha was a love story, but an unconventional one, in that it focused on friendship between two women rather than romance. “It really had nothing to do with men at all,” Gerwig asserts. “I wanted to make another one like that.”

While preparing to make Mistress, Gerwig and Baumbach spent time watching mostly 80s movies such as Desperately Seeking Susan and Broadway Danny Rose – movies where there is “a character that was often larger than life, somehow deeply not safe,” says Gerwig. “And there was always a straight-man kind of character, a square who is maybe from uptown and gets dragged downtown. In Something Wild, it’s Melanie Griffith and Jeff Daniels; she pulls him into this road trip and life and things.”

During their research, the pair noticed that kind of character disappearing from view in more contemporary cinema. “Some of that impulse got translated into something that has been termed the ‘manic pixie dream girl’,” Gerwig says. “But I don’t think those characters fit that, because they weren’t really doing it for the benefit of anybody, or for a guy. They weren’t life-changers in a good way. They were life changers in a suspect way.”

The flat trope of the ‘manic pixie dream girl’ – a possibly meaningless term at this point – is typically concerned with using quirkiness to attract a man. Gerwig and Baumbach’s characters evade the male gaze by practically writing romantic relationships out of storylines altogether. Instead, the bulk of their daily drama revolves around matters like friendship, living situations, securing jobs, authenticity, and other distinctly modern anxieties of 20-something women. They straddle the line between being fiercely independent and total loners. They are full of ambition, but also sort of lost. They also have so much life, glimmers of idealism, and hopefulness.

“I’m not just interested in female friendships, I’m just interested in all of the configurations of the ways women relate to each other,” Gerwig says. “Peer to peer, older to younger, mothers and daughters, sisters, groups of women, professionally … In A Room of One’s Own, Virginia Woolf talks about how men can’t write about what women do alone because they’re not there. Men don’t know what they’re doing when they’re not around. They can extrapolate, but to me it feels like a secret world. That’s the world that I feel some ability to report back on.”

Gerwig’s own pursuit of writing and filmmaking didn’t come into focus until she was well into college, studying at Barnard: “I didn’t really know I could write plays. I knew somebody had to write plays. But most of the writers I was reading were men … It wasn’t until college that a teacher said to me, ‘I think you’re a writer’. It had almost never occurred to me.”

She believes that disconnect to be gendered. From her peers and fellow female directors, she constantly hears women describing similar feelings: “It’s too prevalent. I think that is how a lot of internalized gender discrimination works. It’s not that you feel, ‘Oh I have this goal and there are all of these barriers to stop me reaching my goal’. It just never occurs to you that this could be your goal.”

Gerwig distinctly approaches her work through a feminist lens, and hopes she can inspire younger generations of women to realise their potential as writers and filmmakers.

“In the films I’ve made and the films I hope to make, I hope that there’s a 16-year-old girl watching them, saying, ‘She’s got it all wrong, I’ve gotta make my own!’” she says. “That it sort of gives a passport to whoever the next group of artists are. I still get infuriated when I look at lists, not just of filmmakers, but of musicians, novelists, painters, and it’s just, ‘Guy, guy, guy, guy.’  I love so many of them, but I want more. I want more of my gender expressing what it means to them to be alive.”

Appropriately, in that moment, that rapid, run-on light in her voice returns.

Mistress America is out in cinemas now