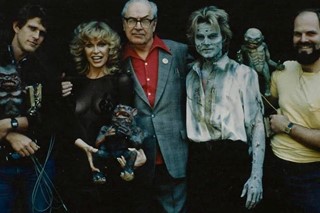 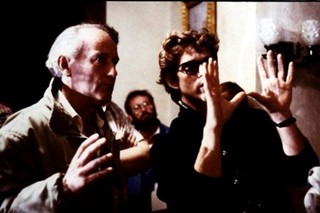 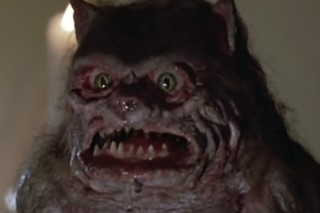 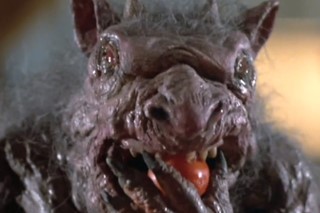 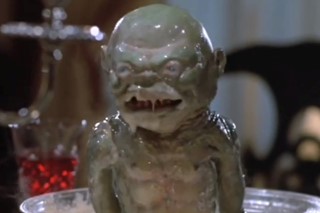 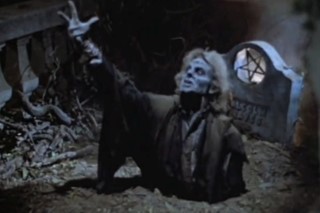 The great thing about the video boom of the 1980s was that it resulted in all number of cheap and cheerful genre romps appearing on the shelves with little to recommend them outwith a poster-picture and a terrific tagline. For those children of the VHS age, who had no ‘insider knowledge’, something such as 1984s Charlie Band-produced pot-boiler Ghoulies was irresistible. The sleeve had an instantly iconic image: a grinning green-skinned antagonist creeping out of a toilet bowl with the words ‘they’ll get you in the end’ slapped over this nightmarish scenario. Of course, such silliness only indicated that Ghoulies was not to be taken seriously, and – in the wake of Joe Dante’s Gremlins – it was difficult to avoid comparisons. Yet, this surprisingly slick, and occasionally sick, little adventure had a charm of its own – leading to three sequels and the following retrospective on one of the rental shop’s most perverse puppet-shows.

“The original Ghoulies script was pretty dark,” reveals director and co-writer Luca Bercovici, who went on to helm such horror schlockers as Rockula (1990) and The Granny (1995). “But we didn’t see (special effects man) John Carl Buechler’s creations until two weeks before filming. When that happened I just said, out loud, ‘Man these are stupid. These things are funny’ and that is how the comedy evolved. We were coming up with these dopey gags on the spot – ‘Hey, one of them could come out of the toilet with a big grin’ (laughs). We were standing there talking about this stuff and Buechler was just disgusted. He was all, ‘How dare you guys do this…’ He had been taking this really seriously and never thought for one second these monsters would be used as jokes. So that is when Ghoulies became a horror-comedy – and it was all because we could not make a straight-faced horror film with these characters. But the problem with that, when you change everything midstream, is that you don’t have enough time to plan and it all becomes a little uneven.”

GREMLINS WAS NOT AN INFLUENCE

The Joe Dante blockbuster had swept up at the summer box office, meaning that when – come Halloween – Ghoulies hit American cinemas it was largely dismissed as a cheap and cheerless cash-in. Later finding its home on video cassette, Ghoulies (much like Critters) managed to etch out a fanatical fanbase of its own, but few genre buffs would disagree that Gizmo and chums were more or less the last word on small-town creature-carnage invasion. Bercovici also agrees – but is adamant that Gremlins had no influence on his own bout of fiendish fun.

“Joe Dante nailed it – Gremlins is a brilliant movie,” he enthuses. “And we were actually in production at the same time as Gremlins but we ran out of money mid-way so we had to shut down. Then Charlie Band wanted to hold out until a Halloween release, by which time Gremlins had done its business, and the perception was all, ‘Oh Ghoulies? That is just a Gremlins rip-off’ but that was not the case.”

THE ICONIC TOILET IMAGE WAS ACCIDENTAL

Yes, that one standout sequence – later to become a beloved of 80s low-budget horror – was not planned to launch a franchise. “Charlie Band is a marketing genius,” mentions Bercovici. “He chose the frame of the creature coming out of the toilet bowl as the inspiration for that famous poster. I think that was pretty brilliant. There is a lot of stuff that never made it in the movie. As I said, we were coming up, on the spot, of stupid things they could do. We had a scene where a Ghoulie vomited – and we put vegetable soup in his mouth and made him chuck it up (laughs). The toilet scene was one of those moments. It was done without thinking: ‘Yeah that would be a hoot.’ But you look at it now and you think, ‘Yeah, of course, that is the poster moment’ but it wasn’t intended that way by anyone on the set.”

GHOULIES TOOK A BITE OUT OF SYLVESTER STALLONE'S BOX OFFICE

Before it became a bestseller on VHS, Ghoulies took to the theatres, where audiences – still high on the buzz from Gremlins – were eager for more in the way of outlandishly appealing celluloid ogres. “Ghoulies was made back in the day where everything went theatrical,” affirms Bercovici. “And we did spectacularly well. We even out-grossed Rambo for an entire weekend in New York. Can you even believe that? Our little guys beat one of the year’s biggest blockbusters for a couple of days!”

UNFORTUNATELY, GHOULIES NEVER MADE BANK FOR ITS CREATORS

“Ghoulies did spectacularly well and made a lot of money, for somebody else,” sighs Bercovici. “It is not a secret, and it is public record, that I and Jefery Levy – who co-wrote the script with me – should have been millionaires. On paper it looked like we were – Ghoulies was a massive hit and we owned 25% of it. And yet, we kept being told it was in the red and it hadn’t gone into profit. So we ended up suing. (Producer) Charlie Band’s company, Empire, was about to go belly-up. To free the library they eventually just made us an offer and we took it. It was a silly, paltry sum but by that point we thought, ‘Well at least we got something for it.’ But Ghoulies bankrolled Charlie’s later company, Full Moon Entertainment – which launched the Puppet Master series – and made him a lot of cash. I never saw the three Ghoulies sequels – I couldn’t bring myself to watch them.”

IS IT TIME TO BRING GHOULIES BACK?

With even the most obscure splatter-shockers from the 70s and 80s being revamped for a new generation (hand’s up anyone who has seen the original Town that Dreaded Sundown or House on Sorority Row), one would have thought that the more recognisable Ghoulies might have been bought out by now. Turns out that Bercovici has been thinking the same thing. “I know that Charlie doesn’t hold the rights to Ghoulies anymore,” states the director. “And to me, a new version of that film this is a huge money-maker waiting to happen. I think it should start off being stupid, like the original, but then have something happen that turns this into a really fucking scary rollercoaster ride. If you make that for a decent price there are legions of people who will see it – based on the name and based on the fact audiences have a childhood love for Ghoulies. There has been some talk over the years about doing a remake, but who knows if it will ever come fruition. I hope it does.”