Want better homes and cheaper rent? So do all of these guys 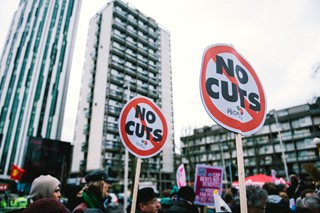 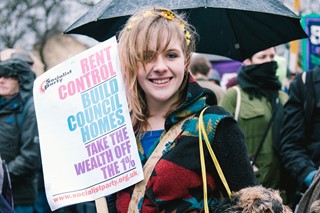 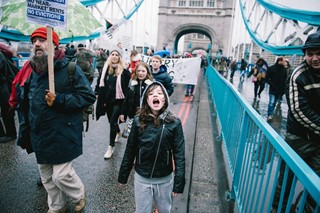 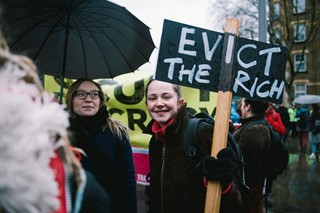 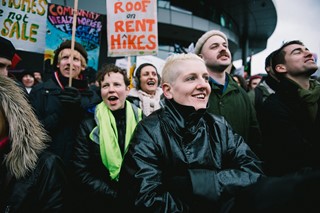 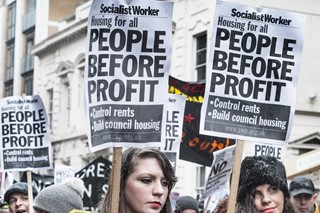 Anyone who lives in London at this moment in time talks of little else other than housing. The middle classes bemoan the lack of chance to buy a house. The working classes fight to even have a right to live in the capital. It's only the super-wealthy who can talk in a positive tone about property in the capital, but the number of people who can call themselves wealthy enough to buy a house in London is decreasing by the day.

It’s why Newham pressure group Focus E15’s March for Homes from Shoreditch (and, for some, south London) to City Hall on Saturday felt an inevitable eventuality in the current climate that sees London remade for the offshore rich. Marchers were demanding, variously, rent controls, more council homes, and an end to the endless demolition of estates that has seen neighbourhoods erased and replaced with unnaffordable "affordable" housing.

The crowd gathered at Shoreditch church. After a few words from the 100-year-old Cable Street riot veteran Max Levitas, Lindsey Garrett from the Russell Brand-backed New Era campaign — which fought and defeated the American developers who tried to put up residents rent from £600 a month to £600 a week — took to the church steps.

"We were faced with eviction but we took direct action: we stood together, we pulled together, we set out an objective and we fought for our rights,” she told the crowd. “We’re now able to remain in our homes; that’s just a small battle in a really big war in regards to the housing crisis. We know people were inspired by what happened on the New Era and I hope people can realise that if we stick together and fight back we do have a voice. Something can be done and it needs to be done because the bottom line is, if we don’t, we’re going to end up being forced out of London.”

It was rousing, affirming stuff, which propelled the crowd out into the freezing, wet streets. “Housing is a right! Not a privilege!” sounded out through a tannoy. We progressed on to Commercial Street towards Spitalfields, which in the past two or three decades has embodied the property boom in London, going from being the stamping ground of grant-funded artists and market traders to becoming stalked by city workers and estate agents charged-up by change and commission.

A barefoot man still in his pyjamas stood on the steps of his flat shouting at the crowd to “Go home! Fuck off!” I asked him what prompted him to step out in near-freezing conditions in his bedclothes. He ushered me into his stairwell.

“It’s a disturbance," he said, introducing himself as James. He worked as a history teacher at a local school. "This is a council flat, and there is a girl crying next door. This group of people protest about everything. They have lots of complaints but they don’t have any solutions. They demand the end of everything – this should be smashed and that should be stopped – but they are unable to compromise and work with other people.”

James is a fallen idealist. When he was in his late teens he would have been on a march like this, he said, “before I knew any better, but as you get older, you realise that the world is much more complex".

"If any of these people’s ideas were put in place, like close down the City, the value of our currency would collapse," he explained. "We’d be unable to pay for our imports. Food prices would go up beyond the reach of ordinary people. There’d be food riots, there’d be starvation as we don’t produce food in this country, there’d be complete social collapse within the space of a year".

He tells me he does think there is an argument for some sort of rent control to reduce the housing cost for many ordinary people. “But revolution? Russell Brand? Rubbish!”  So who are you going to vote for next time? “Even though my wife’s from Finland, I will probably vote for UKIP,” he says. “Just to piss them off.”

James personifies a lot about English apathy, misanthropy and its resulting civic entropy. There is a James in the mind of everyone, a negative voice telling you not to bother, in turn cornering you into a capitalist-realist cul-de-sac. But with this issue, it’s quite simple. It’s not about smashing the system per se – though smashing a lot of it in its current form would be nice. It’s about fighting for one we can live in without fear of languishing health due to dilapidated housing or enforced repatriation to another town or city if you feel London is your home.

Joining the march again, many fellow marchers were in good voice. We passed trough Aldgate towards the Tower of London. In a tunnel under a bridge a quasi-industrial tub-whacking band played. Momentarily sheltered from the rain the crowd began to dance and cheer. There was a feeling of temporary euphoria, a joy in collectivity and protest. As we approach Tower Bridge I talk to a man helping hold a banner for the Hackney housing campaign group Digs.

A Canadian émigré, Byron Peters has lived in Hackney for a year. “It’s a situation riddled with contradictions and all any us can do is try our best,” he said of protesting today. “I live in Clapton and the amount of capital pouring into new developments there is insane.”

“It’s this erosion of public space that is one of the outcomes of our new property culture, where every inch of a successful city is mapped and priced up”

An artist and a maths teacher at a secondary school in Homerton, Peters lived in San Francisco before he moved to London, and sees elements of positivity in the fightback against developers here where there would be no such possibility in Silicon Valley-obeying SF.

"There are so many successes here, like the New Era estate – real, tangible results," he said. "The tech boom in the 90s really changed things in San Francisco. Twitter has been buying up entire city blocks. You have to rent your time in the parks. All the kids will go play, and somebody comes over with a clipboard asking the parents if they had rented their time, because if not they have to leave."

It’s this erosion of public space that is one of the outcomes of our new property culture, where every inch of a successful city is mapped and priced up. On the private land outside City Hall, the couple of thousand marchers joined to listen Jasmin Stone from Focus E15, who was among the other speakers who could feel something tangible in the air forming. As the crowd dispersed, I started talking to a women who is part of a movement of people who turn industrial spaces into homes in Manor House.

"I’m sick of all the uncontrolled rents going up, buildings being knocked down," she said. "Today it seemed like there was a good energy. Sometimes you come to something like this and it doesn’t feel directed. People are serious about this." Soon after the march, part of the Aylesbury Estate, a development decanted of its community to make way for Elephant and Castle’s regeneration, was occupied by former tenants, squatters and protestors. The fight continues.