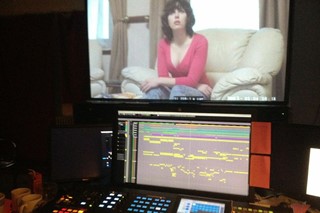 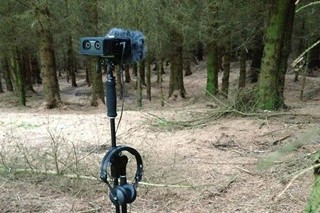 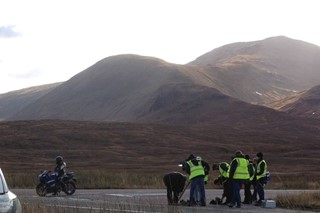 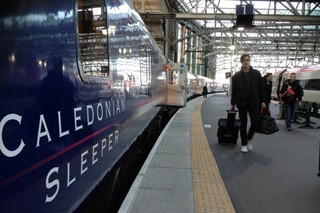 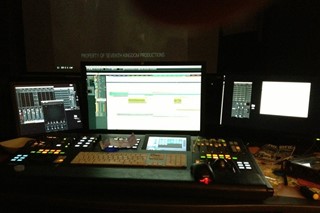 The shower scene in Hitchcock's Psycho wouldn't scare the slippers off of anybody had it not been for it's grating, stabby strings riff – re-enactable by anyone with a pulse (and a quickened one, at that). While now dated, the music from that scene attests to the aural importance of creating a mooooood with sound. Under the Skin, Jonathan Glazer's eerie alien flick that follows Scarlett Johansson around Glasgow luring in victims to harvest their organs, is akin to a cinematic abduction – or at least it feels that way, what with the ethereal score put together by Mica Levi (aka Micachu), music producer Peter Raeburn and music supervisor Jay James. The soundtrack is alienating and directional, brimming with different feels (mostly discomfiting ones) that unsettle even the most stony among us.

That's not to discount the actual sound in the film – a foley symphony that began months before production even kicked off (download a PDF timeline here). Supervising sound designer Johnnie Burn started mulling the idea of how to create an alien soundscape back in 2008, after Glazer "asked me for a cup of coffee". What happened next was a marriage of eerie sound and music. On both sides of the soundboard, Peter Raeburn and Johnnie Burn disclose their respective techniques to make Under the Skin into a truly atmospheric marvel.

GET TO WORK EARLY

Glazer's newest work is ten years in the making. While only a germ of an idea back in 2004, it's languid timeline has been revisited more times than a Brazilian brothel. Johnnie Burn – although mostly involved in the post-production work on the film – got involved during principal photography, only to be accosted by jokes from others working on the film. "'Aren’t you here a year early?' and 'What are you doing here on set?'" they'd joke. "'Oh God, here comes the sound designer’ and things like that…"

A BROLLY DOES THE TRICK

During a commercial shoot for Nike in Toronto with Glazer, Burn put on his lab coat to experiment with sound recording techniques. However, Burn settled on some rather unconventional equipment… a Burberry umbrella. "I started trying ideas (in Toronto) but I realised I needed a directional microphone rather than the things I did have, so there I was and the umbrella was in the corner of the room and I looked at the handle of that and thought, 'That looks just like a microphone!'" he chuckles. "I got a hacksaw out, chopped that off and stuck the microphone in its place. I went and tried it down Oxford Street and it's great because people obviously don’t expect an umbrella is a microphone, so I spent a good week or two wandering around Glasgow just pointing my umbrella at things."

“I went and tried it down Oxford Street and its great because people obviously don’t expect an umbrella is a microphone, so I spent a good week or two wandering around Glasgow just pointing my umbrella at things” – Johnnie Burn, Supervising Sound Designer

USE A COVERT TECHNIQUE

With something as obvious as a Burberry check on your hands, you'd better be stealth. "If you look in the opposite direction to where you’re pointing, you find that you can actually get the handle of the umbrella very close to someone’s face as they walk past and I recorded some very nice atmospheric sounds (that way)."

Pete Raeburn has been working with Jonathan Glazer since 1999. Together they created the hit commercial Guinness Surfer, but this one had a lot longer lead time. Together, they tapped Mica Levi (aka Micachu) after Raeburn was introduced through Music Supervisor Jay James. Raeburn and Levi had worked together before on a project, and although she has never scored a film, they felt she was worth a shot. "It was a long process of working out for Jonathan and myself who to collaborate with on the project." Raeburn continues, "Once we met with Mica (Levi), it was really clear that she was a perfect match. She has a unique way of seeing the world musically. There’s an 'otherness' to her being, musically, which is really interesting for this project. There’s a willingness to go on this journey with us, no matter where it would bring us, no matter what it took."

BOUNCE IDEAS OFF EACH OTHER

Having never done a soundtrack before, Mica could have landed face first. However, Raeburn helped her find the right sounds. "There were things that I would play Mica, things I would play Jon, things that I would hear that would all be a trail of clues to create," he says. "The one thing is to find the role of the music and then to find the execution of it." That execution was key; as the film is so dialogue-sparse, there were a lot of ways the music had to move the narrative forward. "I think we were trying to find non-human emotion, but emotion all the same. I think that’s one of the important characteristics of the score – it’s sometimes terrifying, sometimes moving, sometimes haunting…"

"The scene where Andrew is under the 'void', floating there – we found an anechoic chamber, which is a large room that has zero echo ability in it," explains Burn of the eerie, soundless void where Scarlett's character lures her victims. "It’s way beyond the technical spec of a normal soundproof booth. If I was standing in it talking to you and turned around you wouldn’t be able to hear my voice through the back of my head. It’s quite an odd sensation, it has zero reflection and it allowed us to record from a distance of a good 30 feet with a directional microphone, but have it sound close up yet distant at the same time."

ADD A SPRINKLE OF RICE

A bit of dry rice played a hand in helping to create the atmosphere for the alien's 'void' (the black 'veil' between our world and the alien's). "We had a tray, balanced at a forty five degree angle and it had a few grains of really dry rice on it and we rubbed our fingers in it in time with the movement on the picture and they moved a little bit like the were in zero gravity, you know?" But the menu wasn't complete with just a quick rice rub. "The original idea for what to put on there came from Dan Landin – the cinematographer – who said, ‘Do you know what we need here? Try crinkly leaves.’ So we took his suggestion and tried all sorts of things, but what we ended up with in the film is a combination of things: leaves, rice and bits of sellotape."

LIFE MAY GET IN THE WAY

Spending hours upon end in an east London studio, Raeburn recalls one moment in particular. "I remember my wife going into labour as we were mixing the final cue, and I thought that mixing session was close to the physiology of my wife and the baby, and she went into labour as we had just literally gotten a great result on what is such an important cue in that film. And it was almost no sooner were we happy and feeling like we’d really found the form of a certain scene, that I rushed to the hospital. And I remember the timing of that felt so in-sync with life."

SIT AMONGST THE CROWD

"When I watched (the final cut) in Venice I felt that we hadn’t quite finished," admits Raeburn. "I think Jonathan felt the same, I’m sure Mica too – because we were all so used to watching it and tweaking it. But it was a 'letting go' moment, because I realized there were a lot of people in that cinema and they were watching a finished bit of work, and it took me a moment to realize that."

DOWNLOAD A TIMELINE OF THE SOUND FOR UNDER THE SKIN