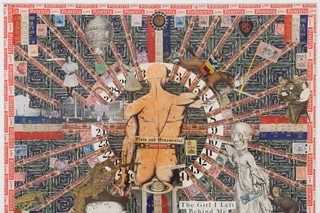 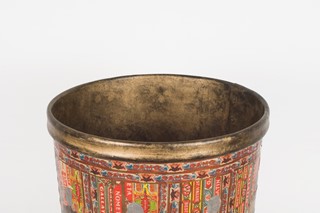 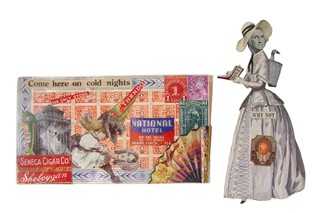 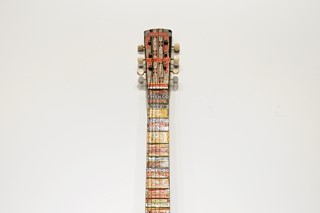 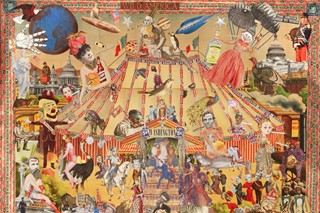 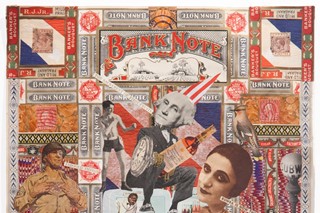 Felipe Jesus Consalvos was a cigar roller from Cuba, who emigrated from Havana to Miami in the 1920s, and wound up in Philadelphia. A ‘tabaquero’ (‘tobacconist’) for most of his life, Consalvos was obsessive creator, turning everything around him into collage: cigar boxes, stamps, found photographs, old family portraits, musical instruments and furniture. All of his surviving works on paper – over 800 pieces – were purchased from Consalvos’ great-niece at a garage sale in West Philidelphia, 1983. The artist’s first solo exhibition was fifty years after his death - in Philidelphia, 2004 - making him the sensation of American Outsider Art.

An epitaph the artist is said to have insribed on his collaged typewriter, among those items found in the garage, ‘cigarmaker, creator, healer and man’ appears to speak of the hybridised context of Consalvos’ art. On one hand, Consalvos’ work as a ‘rolero’ seems to be a key influence in his works, which stucturally take their symmetry from the design of cigar bands and boxes - artistic practices in themselves; yet they are notably sophisticated in their critique of contemporary socio-political values, using satire and elements of the absurd – values enmeshed in the aesthetics of Dadaism, happening simultaneously in Europe. (There is, though, no evidence that Consalvos’ knew of his European contemporaries, nor is there any indication that his work was anything other than private and domestic – a reason for which Consalvos’ work has served a deft blow to critical discourse on Outsider Art.) Carefully-selected text clippings, mostly in English, are ingenuously embedded alongside images of historical figures – Hitler is in the mix, George Washington’s face is pasted onto a terrier: Consalvos’ work is an early example of the political edge of collage.

Unknown in his lifetime, little is still know about this pioneering artist – so little, that suspicions of a hoax inevitably emerged over the decades.  The aforementioned great-niece disappeared, and was reported dead; no further relatives or friends have ever been located. Brendan Greaves, a researcher into Consalvos’ work and curator at the time of the acquisition of the Consalvo works at the Philidelphia gallery who now exclusively represent Consalvos’ estate, brushes the conspiracies aside; but despite his extensive attempts to trace the artist, he admits being no closer to proof on paper of the artist’s identity.

Whoever Felipe Jesus Consalvos truly was, he captured the collective, D.I.Y quality at the core of collage, the most democratic and ideological art medium: Consalvos was a talisman of recycling and rehashing the changing world around him to make a revolving documentary that felt his own.