Taken from the June 2013 issue of Dazed:

The future rarely comes to pass the way we imagine, or, more accurately, as we hope for. But in the case of drones, we were warned. Hollywood (or George Lucas) looked into its science-fiction crystal ball and projected that the camera would fuse with microcomputing and satellite technologies to form the foreboding symbol of our time: the unmanned aerial vehicle, or drone. Essentially, it’s a set of multiple eyes capable of staying up for hours, communicating back home and taking instruction via satellite. US army drones are controlled by teams of two (one pilot and one “sensor operator”), situated miles from conflict zones at a base in Nevada. The political infrastructure ensures that what they are doing remains secret. As artist Trevor Paglen points out, “We know damn well where the things are flying from, we know fairly accurately every time there is a drone strike – but the programme is classified and that allows them to keep it out of the courts and thwart legal intervention. We need to think of secrecy in a different way, as a set of political powers. Secrecy is about what you do and don’t get to know, but more importantly it’s about what gets removed.” Paglen is one of an increasing number of artists focusing on the drone. The approaches vary but the themes of secrecy, political opacity and restriction of information are consistent.

He became fascinated by drones as early as 2003. “If you were driving through Nevada you would sometimes see them. I was thinking about the colonisation and transformation of the sky as an aesthetic thing, but also a political thing. At that time military and intelligence people weren’t as jumpy about drones, so I was able to tour the base and fly a bunch of simulators and meet the pilots.” Since the drone programme’s extension under Obama, information has become more carefully guarded. “That base is on complete lockdown now,” he says. The eerie photographs of Paglen’s Untitled (Drones) series capture the vehicles as tiny specks in the landscape. “To photograph something is to insist on one’s right to photograph it,” he says. “It’s an act that is very embodied – it’s a performance, in a way. It’s very creepy because you’ll look at a drone and see it turn and come straight at you. You can almost see a camera looking at you.”

His 2010 video Drone Vision exploits a glitch and security flaw in the way the images were transferred from the drones to the US-based pilot via unencrypted satellite uplinks. “The vast majority of the images are the drones targeting, practicing looking at roads very methodically, but there are a few moments where a drone looks around, looks up, looks at its surroundings. So it’s like this drone is lost, looking at the world around it.” The notion of the drone “looking” has become a key trait in the work of artists dealing with this subject. The use of the “drone’s-eye-view” allows us to see as it sees, reinserting humanity back into the machine by using fiction, aesthetics and video to anthropomorphise the planes; the drone as a pair of eyes, albeit several stages removed. 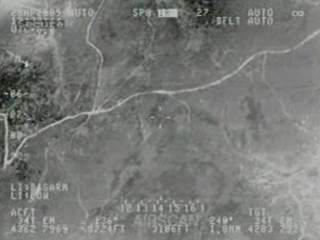 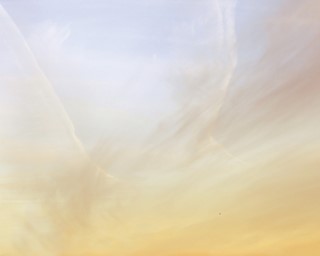 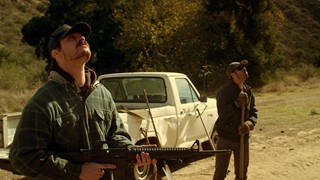 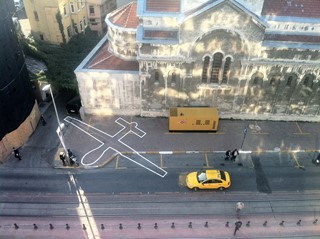 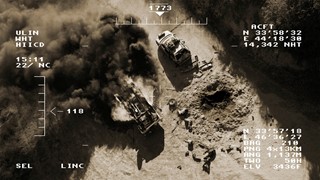 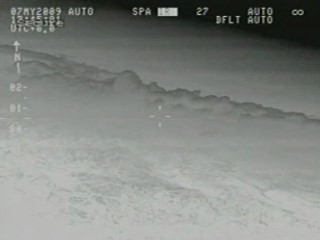 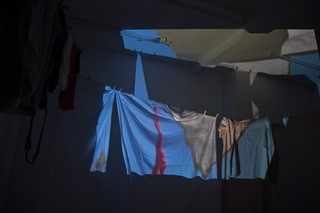 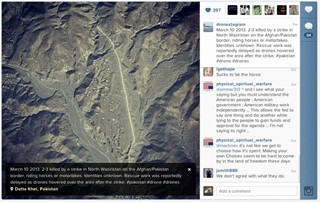 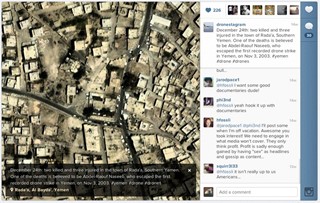 It’s a theme that’s especially clear in London-based video artist George Barber’s The Freestone Drone, an installation assembled using found footage that evokes the repetitions of Alain Renais’ Last Year at Marienbad, the poignant death-like assembled stills of Chris Marker’s La Jetée and the soundtracks to Godard’s films. The work follows a drone journey from the point of view of the machine itself, literally giving its “unmannedness” character by means of a voiceover by the drone, reflecting on its “life” in a voice that resembles a squeaky children’s-TV character. In Barber’s research, he discovered that drone operators routinely study washing hanging out on the line to learn about their targets. Therefore, “it is foretold that the Freestone Drone is to die entangled in a clothes line.”

“I feel that an artistic response to drones is appropriate,” Barber says, “in the way an artist can respond to a political issue like Palestine. When Francis Alÿs walks across Israel and Palestine dripping the green line with paint (Green Line, 2007), you’re not learning any facts, but it becomes a discussion point. My sense of an artistic response to drones was to create one that could talk like Thomas the Tank Engine and had a conscience. In the course of the piece he starts to feel troubled by himself and starts to worry that he doesn’t have any friends. One of his lines is, ‘I’m a bit creepy.’”

Drones are used for the targeted dispatch of those marked for killing on the US government’s kill/capture list, the “disposition matrix”. The names are signed off through an opaque process that, Barber dryly observes, is “rather like Stalin’s, except the list is shorter.” As artist James Bridle, who runs the blog The New Aesthetic, says, “The processes by which a name gets on the disposition matrix are deeply obscure. It is so unclear how the information is gathered. Even the choice of how these technologies are used becomes another technological black-box we should be opening up and exploring,” to expose not just the technology and pervasiveness of the drone but also those who are at several stages removed, who are back-seat driving.

“One way of looking at drones is as a natural extension of the internet,” he adds, “in terms of allowing sight and vision at a distance. They’re avatars of the network for me.” Bridle’s Dronestagram project is an intervention in Instagram, where “people go everyday to get doses of other people’s realities.” By “sharing” these images he presents an uncomfortable reality – satellite (drone’s-eye-view) aerial images of the locations of drone strikes, sourced mostly from the Bureau of Investigative Journalism – and in doing so  raises awareness and visibility of drone strikes. In another project, Drone Shadows, he draws a chalk outline to scale of a different drone each time, highlighting that not only do they not cast shadows from the vast height they operate at but that they are here among us, very literally and very unseen.

The Predator is the most well-known of the different types of drone being used in conflict zones, but all seem to be named using aggressive-sounding terminology reminiscent of Top Gun and other cultural displays of machismo. A “drone in a can” (as Barber describes it) exists, called the Switchblade. Predator drones are equipped with Hellfire missiles, and locate their targets using what marines call the “light of God” laser (just to add to the semantic, self-righteous religious patriotism). Berlin-based artist Omer Fast peppers such language throughout his film Five Thousand Feet Is Best. “The lingua is arcane, archaic, old-fashioned,” he says, “like stickers from another era planted on this technology, almost nostalgically. The fact is, these guys are chubby people who wouldn’t pass any kind of flight test. You’re not talking about the Homeric notion of the warrior fit for battle, you’re talking about people who play heavy metal on the way to work, check in with a cup of soda and do their shifts in front of air-conditioned office equipment. We’re moving away from the notion of the soldier as the heroic character. This was already being talked about in World War I, when pilots were looked down upon because they weren’t in the trenches.”

“We’re moving away from the notion of the soldier as the heroic character. This was already being talked about in World War I, when pilots were looked down upon because they weren’t in the trenches” – Omer Fast

Like Bridle, Barber and Paglen, Fast has been moved to explore the world of drones partly because of the secrecy surrounding them. For his film, which uses documentary modes spliced with imagined fictions, he placed an advert in craigslist Las Vegas and invited drone operators to respond to an anonymous email address. Many did, but when Fast’s producer got a phone call from the FBI almost all the lines went dead. One former pilot stayed in touch. Asked why someone would share their experience despite FBI pressure, Fast explains that the individual believes he suffers from post-traumatic stress disorder from serving as a drone sensor operator. “He self-diagnosed this as ‘virtual stress’,” Fast says. “It’s something he wanted to get out there. The typical reaction he had from people around him was, ‘You’ve just got an office job – you’re not in a real combat zone.’ On the home front, war and domestic life have been collapsed into this job. It has some consequences people did not anticipate for those engaged in it. Of course, this is leaving out the people on the other side of the drone strike, for whom the battle is very real and very physical.”

Fast spent several days with the sensor operator in Las Vegas. “The conversation we had over two days was characterised by his reluctance – recanting what he had just said, asking for it not to be used, breaking off the interview and so on. A lot of the information was given off-camera. Part of the challenge is finding a way to form a narrative with a lot of the audiovisual information missing.” The resulting film combines fictionalised interview reconstruction between a journalist (the Fast character) and a drone sensor operator, with flashbacks using aerial footage and a more recognisable documentary mode. “Video games are using pixels to create as heightened a realistic picture as possible. Whereas drone technology has been involved in taking reality and converting it into pixels.” “Reality” is further questioned by Fast in three narrative segments. The first tells the story of a man who has been obsessed with trains since being a kid, then one day decides to do it for real. No one notices. There is an obvious link to how drones are piloted, from chairs in Nevada using remote-controlled games consoles akin to PlayStation 2 controllers.

The idea that drones are a conflict-only technology deployed overseas is a common misconception. Already the police force in the UK (the surveillance capital of the world) is alleged to have been experimenting with the use of drones. Fast’s final narrative segment hammers home the point that drones are not just a “foreign” problem held at arm’s length, depicting an American family “miscast and misplaced” in a suburb of Las Vegas or Los Angeles. Shortly after a tense moment spent passing through a checkpoint, they are blown up by some invisible enemy, in a clear comparison to civilian victims of drone strikes.

The continually developing technology is moving warfare towards a constant state of Orwellian nervousness. As Barber points out, “there’s always going to be baddies,” and while there’s a kill list the “everywhere war” (academic Derek Gregory’s term) will continue. Jeremy Bentham’s totalitarian Panopticon and Guy Debord’s spectacle have been integrated, and the result is dystopic. Drones have now entered popular culture – in a 2011 episode of Beavis and Butthead, the bumbling teenagers stumble unwittingly into a control room where a soldier has left his drone on autopilot over Afghanistan to fetch some birthday cake. They take over the controls, under the impression that they are playing Grand Theft Auto: San Andreas. But what is being done to question the latent presence of drones? As Clive Stafford Smith from human-rights charity Reprieve wrote last year in The Guardian, “We are sleepwalking into the Drone Age, and few people are debating the dire consequences.”

Paglen suggests the role of the artist is key to the debate. “Look at Turner, who was living in a moment where perception itself was changing dramatically through telegraph and railroads. Seeing itself was changing. With Rain, Steam and Speed – The Great Western Railway he was trying to paint something that was faster than the eye can see – that was new, right? We’re now living in a moment where perception is changing, very literally.”