In the 'Scratch-Video' pioneer's unnerving new installation, a little drone takes a life of its own

In a new installation entitled, The Freestone Drone, the influential British video artist known for his seminal work as part of the Scratch-Video movement in the 80s, George Barber, considers modern ethical and political concerns in a video piece combining found and made footage. Resulting in an unsettling montage, the video focuses around a narrative from the point of view of a drone. Whilst surveying cityscapes during its flight, the drone becomes aware of its own utility and destiny. Sent over Waziristan, New York and London suburbs, it then travels through time, projecting images of the past and possible futures. The unravelling narrative draws the viewer to empathise with the aerial antagonist who acquires consciousness and independence; disobeying orders, the drone is a child within a machine.

With references to Jean-Luc Godard and Chris Marker, The Freestone Drone moves through poetry and philosophy, suggesting that modern warfare and technology are symptomatic of the way we are at our point in history. Much now is at odds with our democratic tradition - hidden, inhuman and robotic. 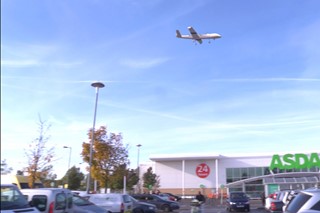 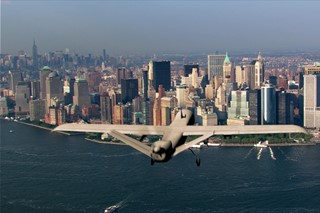 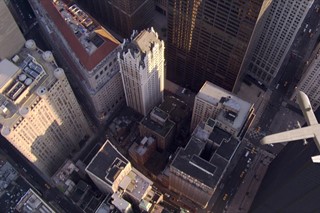 Dazed Digital: Where did the inspiration to focus on a drone first come from?
George Barber: It’s very much in the news all the time, and it’s been one of those secrets or quiet things about the Obama administration that the amount of drone flights under his watch has increased, so I think today America has about 10,000 drones. It became fascinating to me because it's a mirror image or possibly even worse than suicide bombings in the sense that you’ve got something turning up and people are washing their teeth, or mooching about in their own house. They’re just doing domestic things and then suddenly they’re blown to bits. Usually we respond in the West to a suicide bomb in market places in Baghdad like we’re revolted because they’re just women and children and ordinary people who are not armed. But, of course, the drone is publicised as the new accurately clinical device... the impression is that they’re a clean, new chapter of science. But morally they’re not much better than carpet bombings, sometimes. I mean, they are obviously objectively more accurate, but I think in the end they don’t really know who’s in the house, or who’s in the car. There are sort of curious, moral things that are stepped around. I think collateral damage as it’s called is OK if it’s a couple of people, but people worry if it seems like a busload.

So as an artist, I think this is another interesting thing. I think artists have a right to respond to these things in another way [than the news]. So, partly, I’m adding to this debate using poetry as a way… or avant garde filmmaking in which to reinterpret and discuss it. I’m not claiming to bring any new knowledge in the sense that I’m an expert on war, or a politician, but what I can do is appropriate the subject and put an artist’s sensibility on it, which, you know, is just as valid as opening it up for discussion in a different way. Because my drone is like Thomas The Tank Engine; he can talk and develop a consciousness and become aware of what he’s doing. And he says that, “People think I’m a bit creepy.”

DD: It's quite a creepy piece. What kind of feeling are you hoping to leave with the viewer?
George Barber: I think it’s quite an open piece in a sense, it’s quite sad. I used those sorts of devices of lyrical filmmaking. There’s references to Chris Marker's La Jetée or Last Year at Marienbad by Alain Resnais... I think it’s important that stills are used because they tend to memorialise people. When we have moving footage, it’s not quite so lyrical as if you have a still of somebody, or a still of the drone - it makes you wonder about the image more. Stopping the image makes one think more about it, and it becomes more, like, spooky. I think the piece is quite affecting if one watches it a couple of times; it has that sense of someone happening upon something that’s quite horrible.

I think as well that matches what one feels about this business because, actually, when you have a situation of war like this, where the weapons are flown rather like video games, a long way away, and two guys sitting around, (and women) sitting around, in what looks like TV studios, they have all these monitors, they have a chain of command, so basically loads of people standing around in a TV studio watching footage of people going about their lives and then they decide and get the appropriate authorisation. And then these people jump in their cars and join the rush hour back home to have their tea. So that’s a kind of revolting image of warfare in the sense that these people are bureaucrats and are miles away from anything and I think the alienation and the fact that they live amongst us if you like, that they just commute and go about their business, is peaceful democratic play. But, really, they’re carrying out carnage on a lot of people who don’t know it’s coming. I think that’s quite disturbing. I think that, if you like, in the way I’ve done it – that fact that the drone can speak – gets that moral situation across quite well.

DD: You were saying that the still image is more affecting in that way, but obviously your work is mostly video, so what is it about the video format that appeals to you most?
George Barber: Fundamentally, I’ve always liked using found footage and footage on TV that I feel if one twisted the narration people would see the full pleasure of it, or get more out of it. It’s so often when you’re watching television that there are wonderful shots, but they’re all packaged in that sort of Hollywood way. So it became very interesting for me to take these shots and redirect them, with that British art school sensibility on them. Certainly my early work had done that. I quite liked it because it connects more with popular culture, and when I was starting out as an artist I had this thing where I didn’t want to make sort of hallowed kind of art, I liked the idea of taking on elements of popular culture. So in a way, I grew out of a tradition of collage and Andy Warhol, using mass media and that kind of thing, and putting private interpretation on them. It does draw people in and it’s quite interesting when it’s done well if you see a mainstream thing short-circuited. When I first started I used to watch a lot of Richard Attenborough and I used to use a lot of graphics on nature footage. You’ve got to enjoy the nature as much but in a slightly different way.

DD: We hosted your TILT film that you did before and I remember thinking it felt really contemporary. I feel like people today are trying to do things like that quite a lot with found footage and stuff on YouTube. Do you still feel like you are still connected or interested in, popular culture today as well?
George Barber: Yeah, I suppose a lot of the footage is from Panorama and various things. There’s some new bits I’ve shot myself, but by-and-large they're totally mass media images. But that’s still in my repertoire, to use footage and redirecting it and putting new meaning on it. I also quite like the quality of it, you know changing it and making it worse than it needs to be, or better, and manipulating it in other ways. But going back, on the other side of the argument, a lot of my work, the ethos of it, has been used by different generations for different purposes. I mean, at its worse, when I started making things like TILT, the trouble is people started doing that kind of footage of girls and cars and became all that kind of night club VJ stuff… but that kind of image of people dancing, bombs and turning everything into a visual party I mean that’s just the worst extreme. But, there is a big interest in you know, re-cutting found footage. But I guess that’s the scary thing. Once you enter into popular culture, your idea travels fast, and before you know what, say ten years later, people thing your work is a copy of that work and they don’t really rate you for the historical… you know, they don’t really put you in the correct historical framework, or realise you were there first."

DD: What new video artists should we look out for?
George Barber: I’ve seen a lot of decent younger artists, but I like James Richards and Hannah Perry, and I like bits of Ed Atkins… they are definitely people out there doing good things. I think Hannah Perry is the closest to this, but she’s definitely doing her own thing. They’re definitely doing something fine art.