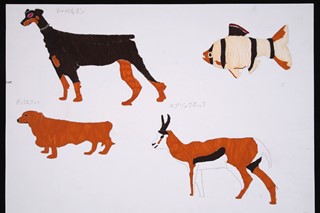 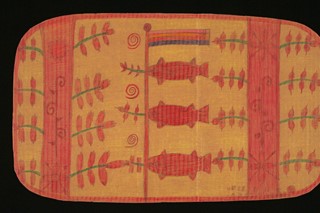 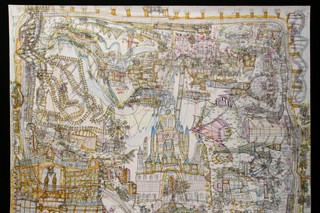 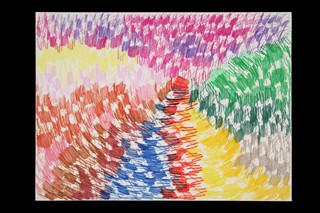 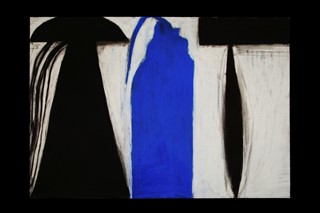 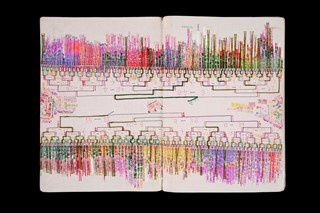 Souzou is an elusive word. In Japanese, its variant spellings capture two meanings: creation or imagination. In both senses, Souzou signifies a potent energy that engenders the materialising of something out of nothing. The word evades direct translation into English; there is no equivalent term. But in the title of the current exhibition at Wellcome Collection in London, Souzou becomes a cognitive trigger that precedes the term Outsider Art, for the first major showcase of Japanese art of its kind in the UK.

‘Outsider Art’ is something of a misnomer, an awkward label that derives from a slight mistranslation. The term was conceived by British art critic Roger Cardinal in the 1970s as an interpretation of the French Art Brut, which has connotations of rawness, of unfettered creation, of positive nonconformity; to translate literally, art brut means raw art: uncooked. According to Jean Dubuffet, the artist who coined the term in the 1940s, Art Brut defines a mode of expression that blissfully escapes assimilation into the mainstream artworld - a culture, he asserted, that drains creativity of its authenticity. “In relation to these works,” Dubuffet claimed, “cultural art in its entirety appears to be the game of a futile society, a fallacious parade.”

The term Outsider Art, however, is more malleable, applied more broadly and inconsistently than ‘Art Brut’, which was usually reserved for the works of asylum inmates and children in the mid-twentieth century; uncontaminated artists, as Dubuffet would say, outpouring the inner workings of the mind, or so it has often been perceived. It is a controversial matter that as a byproduct of this linguistic shift Outsider Art has come to refer to the work of any artist operating beyond the boundaries of the institutionalised art scene. The ill-defined and all-encompassing term groups every self-taught, unselfconscious creator at the margins of society.

Taxonomies in this realm of art seem arbitrary; language stumbles in it. The multiple names devised in the attempt to define this act of making emphasise its resistance to definition, and indicate the extent to which our interpretation of the visual can be dubiously predicated upon the constructs of language. Outsider Art, this off-kilter synonym, is impregnated with historic associations of a romanticised idea of social alienation. The artwork of psychiatric patients became the fascination of early twentieth-century modernism, at a time when artists were exploring ways to subvert established standards in art practice, famously epitomised in Duchamp’s Fountain, 1917. One of the premises of the anti-art movement Dada - to which Duchamp was linked - which challenged the relationship between art and commercial value was the exercising of raw intuition. The restlessly elaborate drawings of long-term psychiatric patient Adolf Wölfli were brought to the attention of the art community after a doctor at his clinic in Switzerland published a book about his work, A Psychiatric Patient as Artist, in 1921. A longing began to grow in the modernist psyche for the ‘purity’ of the outsider, as it was interpreted, as artists sought truth in the vicarious attempt of self-discovery through contact with the ‘other.’

The idea of the untrained individual working intuitively, without an audience in mind lays weight on the diagnostic aspect of these artists’ production, and it is this angle which most Outsider Art exhibitions are hinged upon. But in either of its senses, the word Souzou focuses not on the creator but on the creation, and it is this that forms the framework of the exhibition at Wellcome Collection. Its curator, Shamita Sharmacharja decided to take a non-biographical approach, shifting the focus away from personal-historical identity to objects and objectivity. Imagery confronts the viewer before anything else, while brief references to the social or psychiatric conditions of the artists’ lives are offered secondarily on discreet labels.

Despite the solitariness with which it may have been produced, the artwork becomes aligned with collective ideas through its mode of display. The exhibition is divided into sections of common theme, organised by similarities in thought processes made manifest through wide-ranging approaches to art practice. Fantastical, chimeric creatures, dreamily ambiguous silhouettes, heavily worked textiles and complex numerical codes are brought together as individual conceptions to form new and captivating visual networks.

Language, the first thread to be explored, presents a problem for many of the exhibiting artists. Notions more commonly expressed linguistically are configured through pictorial codes as an alternative to the written word: the characters in a name are transformed into decorations and ciphers; colour and movement denote intensity of feeling; hieroglyphs replace writing in a stack of diary entries. ‘Making’ constitutes the next section, in which found material is put to alternative use. Here, wall hangings embroidered with discarded coloured threads are placed beside an army of tiny figurines made from brightly coloured metallic bin-bag ties.

Throughout the exhibition, much of the work is concerned with ongoing repetition, an approach to making that serves as a kind of therapeutic process. Dozens of visceral clay heads, sculpted by the artist in the mouth as well as the hands, are covered with multiple bulging eyes. The eye, as a symbol of vision traditionally perceived as the counterpart to consciousness or inner vision, abounded on the talismans of cultures past. Here in their multitude, casting dramatic double shadows on a broad white plinth encased in a vitrine, the tiny anthropomorphic creatures resemble relics of ancient idols excavated from a lost civilization. The scene is overlooked by a series of stark paintings, in which eyes stare out like massive gaping voids, black discs of nothingness.

In the room of Possibility, tightly packed rows of numbers in a notebook are revealed as calculations of the possible journeys that might be made on the Tokyo subway. The allusion to eternity and infinite potential is echoed elsewhere in an enormous paper scroll crowded with intricately detailed drawings; a semi-imagined, labyrinthine map combining figurative and abstract representations of cities around the globe, sourced from information and imagery that the artist has discovered online and in newspapers. Working in order from right to left side, the blank roll of paper at the far end indicates the limitless opportunity for the project to continue.

Animals and fashion models from adverts and magazines become the subject of linear drawings in the arena of Representation, the original context of their display removed, while in Relationships, a series of sexually charged, contorted drawings of women with eyes that pierce the viewer’s gaze recall the work of Egon Schiele, rendered in aggressive, densely layered pencil marks with brooding backgrounds. Here, too, can be found claustrophobic depictions of mutated sexual organs, with monstrous feminine forms reduced to their reproductive essence, oozing liquid in dystopian bodily landscapes. Eyes eschewed, their portrayal is replaced by a circular absence of pigment.

While such works might derive from the innermost depths of the psyche, the perception of the ‘outsider artist’ as exclusively inward-looking is dispelled in works that draw upon society and popular culture, revealing yet another misinterpretation embedded in the term Outsider Art. From mimesis to subtle influence, the injection of the outside world into these artists’ work emerges in classic film posters replicated from memory, contemporary anime-inspired models and oil paintings imbued with the historical cultural references of Japanese geishas and Mount Fuji.

Exhibitions of Outsider Art often expose the work of practitioners posthumously - usually for the simple reason that their creations are only discovered after their death - but the exhibiting artists in this instance have acquired recognition in their lifetime and are living and working today. All are either residents or day attendees of social welfare institutions in Japan. While the work that constitutes the exhibition inevitably ranges in approach, method and medium, it becomes apparent that certain formal and conceptual channels arise unexpectedly. A particular shade of blue - a vivid, ethereal Yves Klein blue - recurs as an accidental trope through the eclectic artefacts. Blue, symbolic colour of the unearthly beyond, of spiritual as opposed to physical being, is a signal of transcendence that seduces yet eludes human grasp.

Renaissance physician and occultist Paracelsus talked of an in-born 'light of Nature', a truth within the body that could only be attained through self-knowledge via intuition, dreams and fantasy. “As the light of Nature cannot speak, it buildeth shapes in sleep.” It is this mysterious allusion to an untapped inner knowledge dwelling in the unconscious mind that preoccupied Western psychologists of the nineteenth and early twentieth centuries, and continues to influence contemporary thought. The appeal of the notional ‘outsider’ runs parallel to the historic fascination with exoticism: a cultural imagining of strangeness and difference that immersed the collective mind of nineteenth century Europe. It is a reductive projection in one sense, but the universal appeal of mystery dwells in the inability to understand. In the image of otherness lies a beguiling essence of the unknown that can be connected to art itself. To understand, after all, is to close, but to be in a state of non-understanding is to remain open to avenues of possibility.

Souzou: Outsider Art From Japan  is open now at Wellcome Collection in London