As part of the Driven by Change initiative created by Vuse and the McLaren F1 Team, the Middle Eastern artist has created the car livery for this year’s Abu Dhabi race 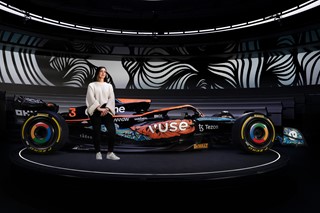 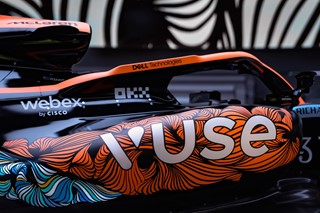 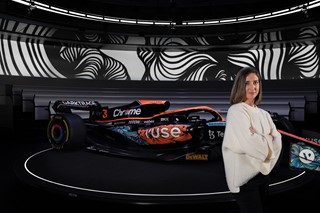 “Anyone who knows me will tell you that I’ve always dreamed about one day seeing my art on something huge!” Anna Tangles tells Dazed. “What’s bigger than having my art racing around a Formula 1 track?” The Lebanese-born UAE-based mixed-media artist has been commissioned to create a one-off design for the McLaren F1 Team’s livery, unveiled at this year’s feted Formula 1 Etihad Airways Abu Dhabi Grand Prix 2022.

As such, she’s the latest creative to benefit from Driven by Change – the programme initiated by the number one global vape brand* Vuse and the McLaren F1 Team with the intention of empowering and spotlighting unrepresented artists from all walks of life. “I never imagined my work would become part of motorsport history,” Tangles marvels. “It’s one for the books!”

The announcement marks the second consecutive year that a female artist based in the UEA has been invited by Driven by Change to design the McLaren F1 Team’s livery. The 2021 Abu Dhabi race livery was created by Dubai-based Rabab Tantawy, whose vibrant designs seemed to herald the speed and electrifying atmosphere of the much-anticipated race.

In many ways, Tangles’ design picks up where Tantawy left off: “My design for this year’s livery very much complements the 2021 design by Rabab Tantawy. Her work represented the importance of community for one to thrive as a human being. Whereas this year my design represents a more personal drive where one’s ability to find focus is integral, in becoming limitless and unstoppable. For optimal performance, one needs both the support of others and the drive to take control.”

“I never imagined my work would become part of motorsport history. It’s one for the books!” – Anna Tangles

Like Tantawy – herself, an inspiring and active proponent for female creatives – Tangles also works hard to empower and elevate other women working in the arts through an ongoing series of workshops and mentorships. This latest opportunity serves to galvanize her efforts. She tells Dazed: “I’m very honoured to be participating in the Driven by Change initiative by Vuse and the McLaren F1 Team for their global campaign which carries a very powerful message. It has not only encouraged me to accelerate my drive to explore and push my lines further, but it has also given my work a bigger purpose. My hope is to continue to teach and inspire others in my community to lean into their creative passion and one day make their mark and tell their story.”

Born Anna Maria Aoun, she took the name Tangles because it echoed her signature monochrome graphic, linear artworks. “I like to call what I do ‘tangling’, or ‘growing lines’ to better explain it,” she says. “It’s a very intuitive process of drawing; you could say it’s a form of automatic art making. I always start with one single line, without any expectation of what’s about to unfold, and that’s always very exciting. The same little line can have endless possibilities and it’s up to me and my mind to choose how to direct them.”

In this sense, Tangles’ practice is redolent of so many aspects of motorsports… the curves and camber of tracks as represented by the bold lines travelling around the canvas; the start – or end – point, like a vanishing point in the distance; and the intense frequency of concentration in which the artworks are created – not dissimilar from the hyper-focus of an F1 driver. “I draw with the intention of tapping into a state of flow, where I become in complete control of the shapes growing on the page,” Tangles tells Dazed: “Aesthetically, there’s a duality in how the car performs and the way in which I draw my tangles. Whether it’s the ink on paper or the car on the track, both race so effortlessly and in complete control… It’s extremely meditative but also very powerful to have that kind of focus, where nothing can stop you.”

There are many other ways in which Tangles’ work is suggestive of the movement and grace of motorsports in general but, more importantly, in which it also speaks directly to the guiding principles and ethos of the McLaren F1 Team. “Much like the team’s spirit, I always look at my art as a constant process of exploration,” she says. “I’m always pushing the boundaries of my lines further and further, to create more and more refined and intricate work. Every tangle I’ve designed embodies the state of mind that it was created with. It is never a finished work, rather a continuous work in progress, that I can always build on and improve.”

While Tangles often creates monochrome artworks – she’s drawn to black for its “power, boldness, certainty, and precision” as well as its ability to “shape the light” – her livery design is stunningly vibrant. Here, she incorporates the signature papaya and blue colours of the McLaren F1 Team, not only to represent them aesthetically but “to really make the artwork pop.”

Other artists who’ve benefited from the life-changing initiative also include 38-year-old Colombian street artist DAST, whose megalithic murals took centre stage at the 2022 Formula 1 Monaco Grand Prix. Inspired by the aerodynamic form of the McLaren racing car and the sense of speed and movement, DAST told Dazed, “When they first look at the artwork, I want people to see and feel the speed of the mural. Then when they look deeper, they will find the detail of the McLaren car.”

“Much like The McLaren F1 Team’s spirit, I always look at my art as a constant process of exploration” – Anna Tangles

Recently, Mexican artist Luis Pablo joined the Driven by Change lineage when his larger-than-life decorative Kiwi bird was unveiled to herald the start of the Formula 1 Gran Premio De La Ciudad De México 2022. Created in the traditional folk art style of alebrije, Pablo’s sculpture represented the symbiosis of Mexican culture with the history and spirit of the McLaren F1 Team and their New Zealand-born founder, racing driver Bruce McLaren.

The Formula 1 Etihad Airways Abu Dhabi Grand Prix 2022 debuted Tangles’ new exclusive designs while bringing together all the Driven by Change artists’ work in a thrilling conclusion to the 2022 F1 season in Abu Dhabi. A statement from McLaren Racing’s Executive Director of Brand and Marketing, Louise McEwen, concludes: “It’s been fantastic seeing Anna Tangles’ work come to life on track this weekend in Abu Dhabi. This marks the latest step of the Driven by Change campaign, following on from Rabab Tantawy, DAST, and Luis Pablo’s incredible contributions. We’re excited for what comes next.”

Visit the gallery above for a closer look at Tangles’ one-off livery designs for this year’s McLaren F1 team’s racing car.

Vuse is an alternative to traditional tobacco products that contains nicotine and is suitable for adult nicotine consumers.