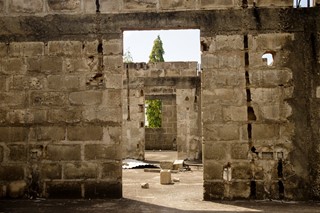 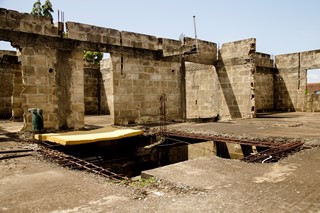 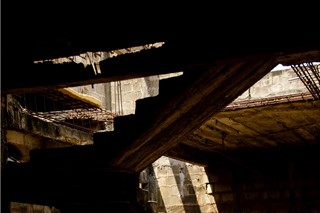 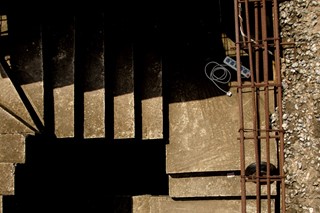 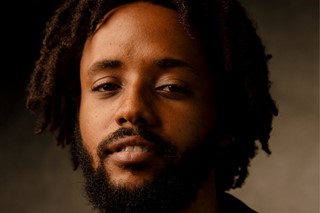 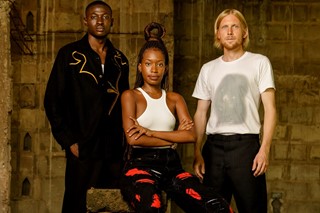 Taken from the winter 2021 issue of Dazed. You can buy a copy of our latest issue here.

Across west Africa, unfinished buildings and undeveloped housing projects litter the landscape – skeletons both ready for life, and left for dead. In Ghana, Limbo Accra are the breaking art collective turning Accra’s concrete phantoms into living, breathing multimedia art projects, and striking up wider conversations around space in cities of the future.

“I was always curious about cities – how they come to be, how we, as individuals and creatives, have this privilege of inheriting them,” muses Dominique Petit-Frère, founder of Accra-based spatial design and cross-disciplinary art collective Limbo Accra, on the ever-shifting and inspiring energies of cityscapes. Throughout human history, we have always strived to make sense of the unknown, the unseen and the unfinished, seeking to format and label as much as possible in hopes of muzzling the loud question mark of the future itself. But if reality itself is in neverending flux, and transition is the only constant we’re likely to know... why not befriend it? Reimagine it? Repurpose it into utopian fuel?

Reimagining has been at the heart of Limbo Accra since its inception. Established in 2018 by collaborative duo and real-life partners Petit-Frère and Emil Grip, the project takes its name from the very engine behind its large-scale, experimental practice: vacancy in the form of empty spaces. Today an organically evolving web of core members and collaborators running the gamut of architecture, visual art, installation and design, the studio began as a direct response to the accelerated urbanisation of west African cityscapes, and the transient nature of its skeletal leftovers: vacant buildings, large spaces rendered destitute by bureaucratic mismanagement, underestimated construction budgets, inaccurate surveying of building-averse patches of land and money laundering. Spaces both large and small are left hesitant and purposeless, unsure of their present, unaware of their potential, trapped between past and future, often for years on end.

“To me, limbo is a powerful term. I always felt this in-between state housed a great sense of power. When something is not clearly defined, you have the opportunity to define it yourself” –Dominique Petit-Frère

The uncompleted buildings scattered across sub-Saharan Africa are often initially intended – and invested in – as apartment buildings or private homes, with finished concrete structures, but lacking fixtures, paint, windows and the necessary adjustments to make them habitable or usable. Instead of discarding these sites as inoperative piles of worthless debris, Limbo Accra approached them as valuable, modular spaces, repurposing them as contemporary art galleries poised to house exhibitions with some of Ghana’s most forward-thinking artists, including internationally acclaimed installation artist Serge Attukwei Clottey and Afro-surrealist painter David Alabo. The exhibitions are site-responsive, interacting – directly or indirectly – with each building itself. For instance, Clottey’s trademark working material, the ‘Kufuor gallon’, was used to create an installation which covered the walls with the bits of the yellow water containers common in Ghana. And digital artist Hakeem Adam contributed photographs documenting the link between Accra’s past urban landscapes and traditional architectural styles, while musing on the implications that accelerated modernisation may carry for the city’s future.

If the personal is political, the monumental begins with the local – and Limbo Accra have, in just a few years, painstakingly worked their way up from a small circle of passionate, idealistic collaborators to an established design studio, currently nearing the completion of its first large-scale public space: the Freedom Skate Park, made in collaboration with youth empowerment collective Surf Ghana, fashion brand Daily Paper and Virgil Abloh. “This project is an amazing opportunity for us to actually directly implement on the ground the ideals that have been driving us since the start,” explains Grip. “It’s a direct opportunity to counteract the privatised forms of building that reign supreme across the cityscape.”

“We have a lot of clubs, a lot of cafes, a lot of restaurants... yet there are no places to just chill and be human,” says Petit-Frère. “We’re aiming for the skate park to become one of these spaces. It will be a modular outdoor space for skaters, of course, but also a regular park surrounded by nature, with wifi and open-access programs.”

“Together, and individually, we are creating something monumental”
– Leroy Wadie

“To me, limbo is a powerful term,” reflects the New York-born, Ghanaian-Haitian self-described “budding urbanist” Petit-Frère of the personal significance the notion of liminality has had for her, over the course of her life. “New Yorkers are pretty much always in a state of limbo. It’s a city full of immigrants – first-generation, second-generation – with roots all over the world, but an identity fashioned by this massive city. I always felt this in-between state housed a great sense of power and possibility. When something is not clearly defined, you have the ability to define it yourself.”

Petit-Frère and Copenhagen-based Grip met in 2014 in Accra, where they were pursuing internships in the development and education spheres, respectively. As their relationship blossomed, and yearly family visits to the Ghanaian capital became a habit, the couple became increasingly interested in the urban fabric of the city, and how it impacted community life, creativity, exchange and culture. Neither are trained architects or designers – the passion channelled into their project was, above all, fuelled by a desire to democratise space, and celebrate the revolutionary effects of a city designed to unite and strengthen communities, instead of insulating them for corporate profit. “Like much of the architectural canon, NGO culture is also very much about these top-down, kind of patronising tropes in the vein of ‘Let’s save Africa’,” notes Petit-Frère. “But from where we started, it was more about saying, ‘Here is a city that’s thriving right now, powered by its broad landscape of art, music, DIY youth culture and all of these vehicles for development outside of what people would normally be inclined to think of.”

Informed by the explosive subcultures of megacities such as New York or Berlin, and the cosmopolitan sensibility of its founders, Limbo Accra set the goal of liberating the latent creative cultural energy of the west African capital by emphasising the importance of public spaces. “Coming from Copenhagen and New York, we know that there are places where the youth really seem to have a voice. They have the space to create their own realities, build their own worlds,” says Grip. “In Accra, the environment is very controlled – for instance, there isn’t a big graffiti culture, despite there being no shortage of creativity and creative minds. But the notion of private space and private property are pretty omnipresent, guiding and to a degree stifling these forms of free expression. What we’re interested in is unleashing it, giving young people and emerging subcultures a space they can actually access and navigate.”

Indeed, the lack of public spaces – the beach, Petit-Frère argues, stands out as essentially the only
non-private meeting point – causes far more collateral damage than meets the eye. “There’s a lot of artistic activity happening in Accra, but it all takes place in very controlled spaces, such as private galleries. At the same time, there is a juxtaposition of new buildings and the abandoned, concrete skeletons littering the city. Our work tries to remix all of it – the old, new, established and the liminal – into an urban landscape that fosters growth and opportunity for everyone.” Their network of members and collaborators – including artists Alabo and Clottey, architect Hakeem Mustapha, graphic designer and filmmaker Leroy Wadie, spatial designer Charles Quartey, visual artist Aida Esi, and curator and writer Adjoa Armah – reflects the studio’s interdisciplinary DNA, which builds cohesion around ideals and visionary collective action rather than individual success according to the corporatist rulebook. The collective’s activations can be described as strategies of architectural upcycling, resurrecting derelict liminal spaces through artistic interventions – quite literally repurposing empty ruins into galleries open to the public.

“Art is a mirror for society, and an invitation for the individual to question what they see. It has the ability to distort, enhance and degrade what we consider ‘normal’, or reality altogether,” says Alabo. “That is what makes art so powerful, and why we need greater diversity in the forms of art exposed to west Africans, on every level of society. As an African and a futurist, I, along with like-minded explorers such as Limbo Accra, will continue to speculate on the possibilities nestled within the future of our continent.” A similar sense of creative calling prompted Wadie to move to his old hometown from London. “I moved back [to Accra] to help improve the creative landscape, so to meet other creatives with this mindset and collaborate with Limbo Accra means a lot to me,” he says. “Having access to creative talents who are all pushing the design and creative agenda in Ghana has enriched my mindset.”

With a sharp vision and a distinctively action-geared brand of utopianism, Limbo Accra are on their way to transfiguring the ‘blank slate’ that is the urban landscape of the Ghanaian capital and its
ambivalent brutalist architecture, showcasing the explosive potential of the country’s young dominant demographic – the average age here is a little over 20 years old – in a constructive, art-fuelled intergenerational dialogue. In doing so, they honour the land along with its history and dwellers while gazing into a horizon of sustainable and liberatory creative and spatial collective existence. “Together, and individually, we are creating something monumental,” concludes Wadie. The future of Accra’s limbo is imminent – and hard at work.