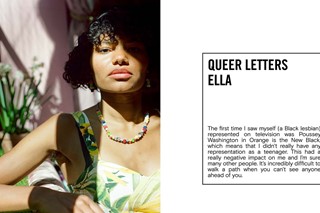 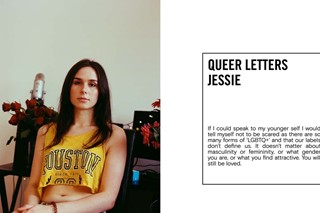 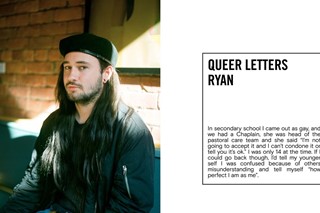 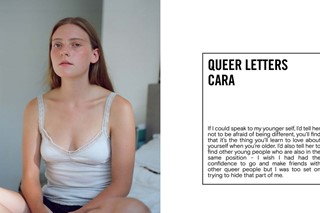 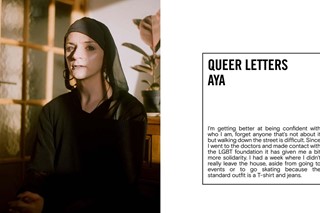 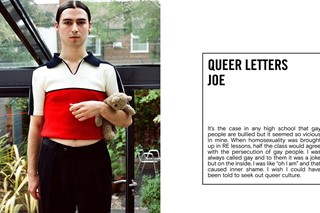 Growing up in Halifax, England as a queer-identifying person, Heather Glazzard never saw herself represented in the media. Now in her mid-20s and based in Manchester, the photographer has made it her mission to highlight the voices of the queer community. Glazzard uses her camera to question and propose new ideas about gender and identity, while also promoting vulnerability.

Earlier this year Glazzard launched her series, Queer Letters, which includes intimate portraits of queer creatives. Going one step further, Glazzard asks her subjects to write personal letters that include advice and reveal their own experiences struggling with and learning to celebrate their identities. Shooting subjects on film and hand processing all of her own photographs, Glazzard’s work aims to help people feel more comfortable with their sexuality and bodies. “My photography is about creating and embracing a space of wholesomeness outside of preconceived stereotypes and judgments,” she explains.

Most recently, Glazzard’s work was featured in Vogue's Photo Festival on Embracing Diversity in Milan earlier this month, and the larger body of work is on now display at Open Eye Gallery in Liverpool until November 30.

We sat down with Glazzard to learn more about this project and how these portraits and letters can encourage younger queer people to accept and honour their own identities.

“I felt lost and worried about feeling things for girls, and dealing with challenges no one around me talked about it. I wanted to create a representation for anyone that might feel similarly today” – Heather Glazzard

When did you first start practising photography and why did you choose this medium?

Heather Glazzard: I started obsessively photographing women I was sleeping with when I was about 20. However, I have always been interested in photography. I partly got this interest from my dad as he used to have a dark room and talked to me about photography for years. I like it because it can capture a moment in time – like a memory can’t. Memory changes but photographs never do.

How does your identity as a queer person inform your creative work?

Heather Glazzard: I document my queer community through performance, documentary photographs, and fashion shoots. Doing so also allows me to explore my own sexuality and gender.

How did the project initially come about?

Heather Glazzard: At 14, I felt lost and worried about feeling things for girls, and dealing with challenges no one around me talked about it. I wanted to create a representation for anyone that might feel similarly today. I want to show representation for all the LGBTQ+ people, tell their stories and successes so younger people don’t feel so alone.

What is your process for doing this project?

Heather Glazzard: I try to find people who feel comfortable talking to me that understand the lack of representation. I shoot people in their most comfortable spot and then I interview them. Through their photos, they become their own representation, which is what I think was beautiful about Ella’s (cover image) story. She became her own representation when her photo got to hang at the Vogue exhibit.

Why did you want to give LGBTQ+ individuals an opportunity to also share advice and write a love letter to their younger selves?

Heather Glazzard: Speaking to your younger self is powerful, but it also gives younger people a chance to take advice from those who are photographed. Beyond images, words are equally powerful, and I think that’s why I wanted to put the two together.

What do you hope other people – both queer and non-queer individuals – will take away from seeing these portraits and reading these letters?

Heather Glazzard: I hope it educates non-queer people and queer individuals alike. Every person has their own individual struggles, but when we open up about our struggles people connect with them whether they’re queer or not. Just feeling a similar emotion makes you relate to someone and that's how this project aims to educate people. It creates a space of openness, while also showing people who are just like them with the same feelings, successes, and struggles.

How can people get involved in Queer Letters?

Heather Glazzard: It’s ongoing. People can reach out through email or my Instagram if they want to get involved. I hope to travel with this project. I’ll be in San Francisco and New York City for Christmas, so I’d like to reach out to people over there. I’d also like to go to countries where being LGBTQ+ is still a crime, but I’d need financial support for that.

What is missing from mainstream media in terms of storytelling and representation of the queer community?

Heather Glazzard: There’s a huge lack of representation for intersex, non-binary, queer women, and trans men. It’s as if these people are completely forgotten about. I watched Trans Kids: It’s Time to Talk recently, which showed a negative portrayal of non-binary people and that’s honestly the only mainstream thing I’ve seen, everything else you have to actively search for. The media can twist things and this is why making more stories authentic and positive is so important. That’s why honest storytelling should be accessible.