Curated by Erik Raynal, the pages of SORT Zine are brought to life in a subversive, immersive experience 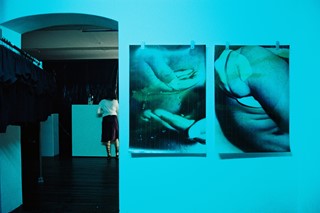 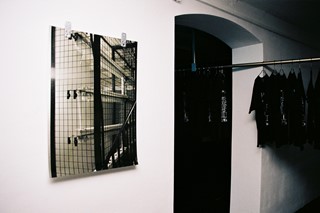 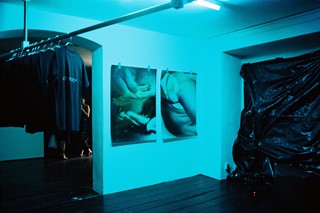 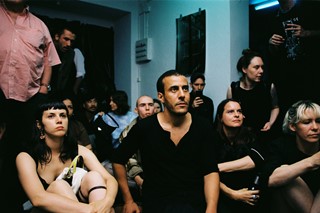 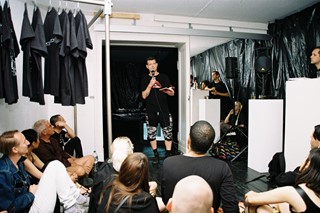 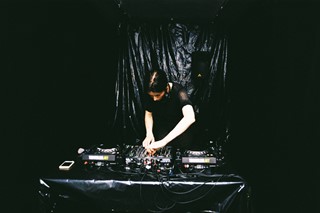 SORT Zine has always held a dissident ethos. For the unveiling of its first issue in 2015, SORT Studio founders Joseph Delaney and Matt King told Dazed, “We'd rather show you an image of something ugly and you feel something, even if it is disgust.” On their quest to find the most obscure nooks of fashion, photography, and art, their voyeuristic, fetishist visions embolden us to put two fingers up to conventions and, as they advise, “Fuck beauty, stay ugly!”

SORT’s latest venture is an immersive exhibition, titled Sound & Noise, curated by Erik Raynal at Berlin’s Space_31. The show continues along a warped pathway, and, in the shadowy confines of the gallery, you can glimpse previews from the upcoming fourth issue – translated from the printed page to a physical world of sight, sound, and touch. “There are video and sound, photography is seen in large scale. Through set design, we've manipulated how you experience the space – bright blue light or total darkness and shadow dominate, and a thick black vinyl curtain envelops you in a way that’s a little claustrophobic,” explains Delaney.

“(The artists involved are) the people we can say our most fucked up thoughts to – and rather than disgust, be met with excitement and acknowledgement and acceptance” – Joseph Delaney

This has all been heightened by the host of artists and performers that have collaborated with SORT for Sound & Noise: “Noise duo Naked lent their harsh but slick brand of sound and performance for a video and photo series,” adds Delaney. "Amy Gwatkin’s work puts under the microscope a very intense exchange as she pushes the boundaries of intimate portraiture. And Slava Mogutin’s playful poetry makes you laugh with a hard punch to the stomach – it can touch on the darkest subject with such a wit and humour that’s so needed right now.”

“We also worked with new collaborators on this show,” adds King. “Fashion stylist and consultant Erik Raynal took a new role in curating this show for us. We worked alongside set designer Joshua Hoareau to create the physical space we desired, musician Alobhe created the soundtrack for the evening. Louise Alsop worked closely with us to design limited edition merchandise, and finally Nhu Duong, the fashion designer/gallerist and owner of Space_31.”

Delaney chimes, “They’re the people we can say our most fucked up thoughts to – and rather than disgust, be met with excitement and acknowledgement and acceptance.”

Having found kindred spirits in their collaborators, it “made sense” for SORT to transpose its work from London to the Berlin scene for this exhibition. Delaney talks about often being “branded niche or underground” within the London context, whereas his and King’s interests can be “much bigger and more out in the open in Berlin”. He adds, “It’s become a clickbait cliché to say there’s a freer atmosphere there, but it does feel like there’s more room to explore these ideas openly, and much more labyrinthine sex and sweat-soaked spaces to do so.” The result is a mutant marriage of the murky corners of London’s rave scene and Berlin’s underground fetish clubs.

With Sound & Noise, SORT’s agenda is still very much about wanting to make us “feel something”. With the work being rooted in human contact and intimacy, it presents a universality that we are all able to tap into. “Awash with anxiety and awkwardness, it’s wanting to push boundaries in a way you feel you shouldn't,” Delaney says. “Right down to the universal human moments often misrepresented, the more awkward parts of a sexual encounter, blurry exchange had on a dancefloor at dawn, or the conversation you’ve had in a darkened corner as you’ve dropped a pill.”

But the pair is adamant that this work is not an exercise in escapism. “We’re fed the narrative that people party to distract themselves from what’s going on in the real world, but this is our real world. This is our comfort zone,” explains Delaney. For SORT, the banishing of inhibitions is a pursuit of something honest. “Once the shame and guilt instilled in us for wanting to live our lives the way we do, of being put down for being freaks, fuck ups or outsiders, is gone, there’s the glimmer of something that looks like the truth.”