From Palestine to the NHS: dozens of activist groups descended on rural Cornwall last weekend to challenge world leaders on a range of pressing issues 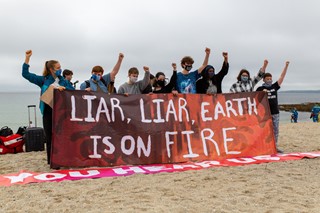 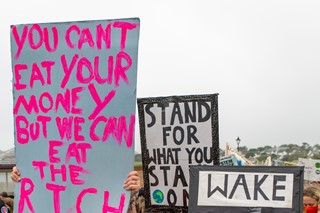 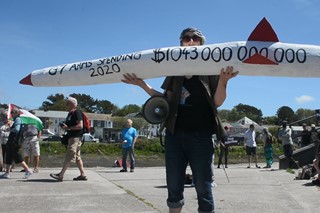 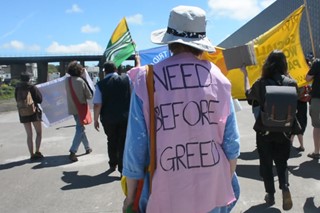 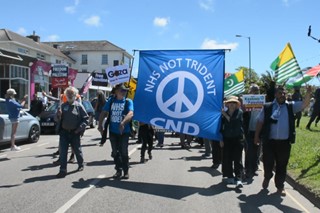 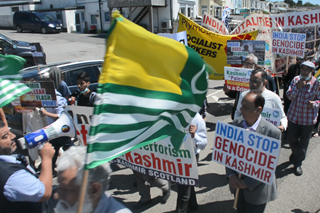 It’s Saturday afternoon (June 12) in Hayle, a small port town that leads onto Cornwall’s St Ives Bay. An assembly of protesters from a melting pot of backgrounds have unified to take to Hayle’s streets, marching past wary residents and tourists with placards reading ‘Freedom for Palestine’, ‘India Stop Genocide in Kashmir’, and ‘NHS NOT TRIDENT’.

When the protesters come to a standstill to block oncoming traffic, a man in a white car puts his foot to the pedal and pushes on forward, driving into the crowd. The scene quickly descends into chaos; protesters lean against the front of the car in an act of obstruction while others begin to chant, journalists swarm the area with cameras clicking, and police liaison officers attempt to dissolve the escalation.

At around the same time across the white sands of the bay, Group of Seven – an intergovernmental political forum consisting of some of the world’s key leaders including Joe Biden, Boris Johnson, and Emmanuel Macron – are sitting down to discuss improving their readiness in the event of a future pandemic.

Now in its 47th year, the G7 summit sees the meeting of the world’s so-called largest advanced economies – Canada, France, Germany, Italy, Japan, the UK, and the US – meeting face-to-face in Cornwall, a region seen as central to the UK’s green technology sector. Taking place across three days, this year’s event saw a part of St Ives and Carbis Bay blocked off from tourists with local residents needing to show ID, and a particular blockade on uncredited press and protesters. Demonstrations, like that in Hayle, weren’t quite able to get to the doorstep of the summit, but it didn’t stop people coming in their droves to create noise, spectacle, and disruption in an effort to grab the attention of the leaders sojourning over in the neighbouring bay.

Organised by a coalition of local, national, and international grassroots groups under the name Resist G7, activists were marching in Hayle as part of the ‘Internationalist Day of Action’ in solidarity with people suffering from global oppression. Among the 25 activism groups currently listed as part of the coalition are Campaign for Nuclear Disarmament, Cornwall Youth Climate Alliance, Kill the Bill Cornwall, Palestine Action, Peace in Kurdistan, Plymouth CND, Stop the War Coalition, and Tehreek-e-Kashmir.

Maddalena Dunscombe of Stop the War Coalition was one of a number of speakers who addressed the urgent situation in Palestine. “My generation has grown up in a war economy, and I don’t think that’s talked about very much,” she said. “We’ve grown up witnessing cuts to the NHS, cuts to our school system for the last 20 years, while the Tories have increasingly funded military projects such as Trident, such as another aircraft carrier costing trillions of pounds.”

“Without stopping war, we cannot have climate justice,” she added. “But we need to start today by saying we need to free Palestine, because Palestine is bearing the brunt of the profits that our government is making by ruining the planet.”

The internationalist march in Hayle concluded on the beach. In a moment of surrealism, the protesters approached the cliff edge and looked out over the crystal blues of St Ives Bay; Kashmiri men dressed in suits protesting the Indian brutalities held flags blowing fervently in the wind, while bewildered sunbathers down below stared back up at the crowd.

On the beach, a two-member protest punk band, Glitchers, played an energetic set, while another group dressed in silver cloaks twirled around blue umbrellas reading “G7: drowning in promises”.

Previously, Glitchers have teamed up with Kill The Bill and People’s Assembly, and last November set up outside Downing Street to protest the lack of support for the arts sector during the pandemic.

Band member Jake tells Dazed: “Today’s message is about the G7 leaders stopping killing people. We’ve spent the last year and a half saving lives but we’re still building weapons that can wipe out the entire planet and we’re still dropping bombs in countries and literally, killing people, whilst they’re on TV saying ‘stay home, save lives’.”

Saturday’s escapades in Hayle were just one of many unusual sights to have been observed across Cornwall over the course of the weekend. Global environmental movement group Extinction Rebellion organised numerous events, including the return of the ‘Red Brigade’, a line of silent individuals with painted white faces dressed in red to “symbolise the common blood of all species that unifies us”. Oxfam campaigners wore caricature costumes depicting the seven leaders sat on deckchairs on the beach in Falmouth; protesters filled the streets calling for G7 leaders to stop war and famine in the Tigray region of Ethiopia. Elsewhere in Falmouth, paddleboarders, surfers, and kayakers took to the sea off Gyllyngvase beach in an environmental protest organised by Surfers Against Sewage.

Very proud to be a Falmouth resident today!

London-based Elijah McKenzie-Jackson, 17, has been going on school strike since he was 15 as part of the climate strike movement #FridaysForFuture that began with Greta Thunberg. On Friday (June 11), he could be seen down the front of the youth-led climate protest in Falmouth.

“There is something special and unique about young activists which makes us even more powerful,” Elijah tells Dazed. “We have not been confined to the barriers of our collapsing system yet. We still have our imagination and hope, so we can envision a future where equity and the environment are at the heart of all governmental actions.”

“(Young activists) still have our imagination and hope, so we can envision a future where equity and the environment are at the heart of all governmental actions” – Elijah, protester

After spending much of his teenage years involved in environmental activism, protesting at the G7 summit with others his age (many of whom are still too young to vote) was an important act in order to make sure their voices were heard and to hold leaders accountable for global emissions.

“Over the past two or three years young people have put climate change on the global agenda,” Elijah continues, “however we have only received crumbs of what needs to be done on a binding political level. That is why for me, showing up to these corporate meetings and negotiations is so important.”

He adds: “To achieve real climate justice, governments like the ones included in the clique of G7 must follow the latest available science and make fair, transparent, and inclusive decisions that factor in distributive justice. The UK was one of the first to industrialise so must be one of the first to radically decarbonise immediately.”

The G7 summit itself has been the focus of much criticism, with many protesting against the event taking place in the first place. By Sunday, Boris Johnson had made an seemingly unattainable promise to “vaccinate the world” by donating one billion vaccines by the middle of next year, and despite G7 leaders pledging to raise $100 billion a year to help poor countries cut emissions, they had failed to make any radical announcement regarding climate change, leaving activists disappointed. Former Labour prime minister Gordon Brown chimed in on the anticlimax, saying the summit would “go down as an unforgivably moral failure”.

And while one of the main topics of discussion was the climate crisis, Boris Johnson set a tone of hypocrisy for the weekend by arriving in Cornwall from London by plane, and putting on an impressively un-environmentally friendly Red Arrows air show for the G7 leaders after they signed the ‘Build Back Better for the World’ pact to address economic fallout as a result of the pandemic.

On a more local scale, Cornish residents have been split over the decision to host the summit, with some particularly vexed by the impact it has had on their area. Over 6,000 police were deployed to the region, with half being housed on a large cruise ship moored in Falmouth, and many locals had to close their businesses, be confined to their homes or even leave the area temporarily to avoid the disruption.

Speaking to PA Media, Mrs Hodgson described the event as “totally inappropriate”, “not climate-friendly”, and “a total waste of money”.

“They’ve closed our hospital, they’ve closed our police station, and they are wasting millions and millions of pounds for international people to have a party,” she said. “The people are being marginalised here – and the G7 is making it worse.”

Despite the ticking clock that hangs over many humanitarian and environmental activists, protesters made it clear across the weekend that they will not give up until adequate progress has been made.

“Young people being outside these spaces are visual reminders for what needs to be done and who’s going to be affected by the decisions being made,” says Elijah. “I will not stop until real action is taken.”