Week-long demonstrations against the proposed changes to the Police, Crime, Sentencing, and Courts bill resulted in violent clashes – here, attendees share their stories 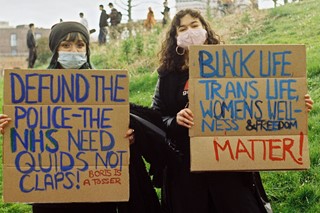 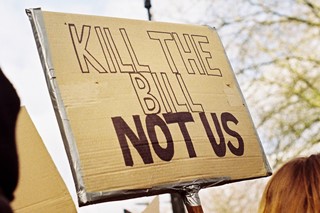 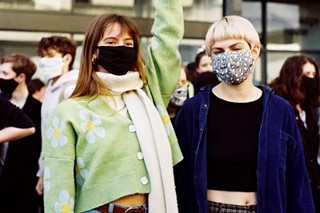 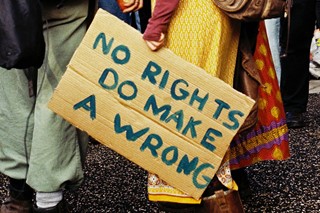 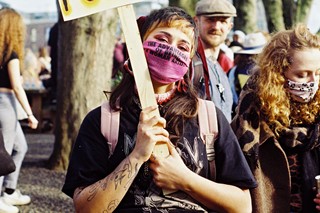 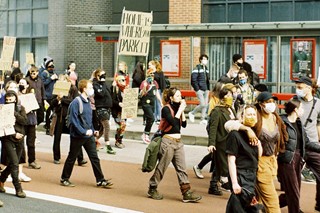 “The fundamental right to protest is what makes a democracy,” says 31-year-old Cameron*. “If we are being told when, where, and how we can protest, then (we’re no longer) free, but controlled by the state.”

Cameron is one of thousands who joined the Kill the Bill protests in Bristol – week-long demonstrations that were marred by shocking scenes of police brutality. Attendees were demonstrating against the government’s proposed changes to the Police, Crime, Sentencing, and Courts bill, which are set to restrict our right to protest. The amendments could see protests constricted by start and finish times and noise limits, while protesters who cause “serious annoyance” or deface memorials could face up to 10 years in prison.

22-year-old Will, who also joined the demonstrations in Bristol, calls the measures “draconian and disproportionate”. He tells Dazed: “Many of the rights we enjoy today – universal suffrage, for example – have only been possible due to protests that have caused distress and annoyance. This bill is a knee-jerk reaction to the Black Lives Matter and Extinction Rebellion protests, and will be used to silence criticism that Priti Patel wrongly labels ‘hooliganism and thuggery’.”

Those comments – made during last year’s BLM protests – were repeated by the home secretary on March 21, after the first day of protests in Bristol led to violent clashes between protesters and the police. Photos and videos on social media and in national newspapers showed protesters setting fire to police vans and smashing in station windows. BBC News even falsely reported that several officers suffered broken bones – a lie that was later retracted by the Avon and Somerset police.

Two days later, on March 23, protesters in Bristol took to the streets again, this time to demonstrate against elements of the policing bill which would target travelling communities. Attendees had set up tents and were ready for a peaceful day of action, but as night fell, police in riot gear brutalised protesters, manhandled journalists, and made 14 arrests.

Then came Friday (March 26), which Cameron says was “revenge for Sunday, pure and simple”. The police were out in full force, wearing riot gear and using dogs, horses, vans, and a helicopter in an attempt to disperse and intimidate the crowd – some of whom were throwing bottles and bricks at officers. In the week since, the police have been criticised for their heavy-handed approach, particularly for using their riot shields as weapons – something the Network for Police Monitoring called “extremely concerning and disproportionate”.

Cops in a Bristol now chopping at protesters on the floor with their riot shields . Disgrace. #bristol#BristolProtest#killthebillpic.twitter.com/q2OIWqr1HB

Yesterday (March 31), hundreds of people took part in a sit-down protest in front of Bridewell police station – the centre of the week’s protests – which went off without a hitch. Many have said this was because the police remained out of sight and allowed the demonstration to go ahead.

“Violence only occurred in response to police provocation,” explains Will, who joined the protests on Friday 26. “As the protest turned into a procession through Bristol city centre, the atmosphere was jovial, almost celebratory. Many of the protesters were dancing, singing, and chanting. However, at several points, I observed the police goading protesters, seemingly trying to provoke them. The police attacked journalists for no clear reason, and indiscriminately hit protesters with batons and their shields – (the latter of which) are designed as a defensive tool, not an offensive weapon. Some officers being overzealous in their enforcement seemed to take great pleasure in doing so.”

Cameron joined the demonstrations on both Sunday 21 and Friday 26. He tells Dazed: “On Sunday, people were sitting – being loud of course, but peacefully – then police started pepper spraying those they didn’t like the look of. People were being pushed and shoved by the police for just standing doing nothing. It was scary.”

On Friday, Cameron says protesters “subconsciously agreed that we were going to keep it peaceful to make a point”, after media coverage held demonstrators accountable for the violence the previous week. “We marched and sang and got very loud,” he explains, “but that’s the point of a protest – otherwise it’s just a walk. The police were in riot gear; we were in clothes with flowers.”

19-year-old Saranya joined protests on Tuesday 23 and Friday 26, and, like Cameron, saw the police pepper spray attendees and batter them with shields and batons. “During Tuesday’s protest, riot police and officers on horseback charged at a crowd of about 50 to 70 peaceful protesters who were just sitting and standing in the road,” she explains. “This was repeated on a bigger scale on Friday.”

“The police made the atmosphere feel very unsafe,” continues Saranya. “I’ve been to a lot of protests and these have been the only ones where I’ve been scared of what the police might do. The vast majority of escalation that led to clashes and violence always came from the police side – it could have been avoided, but instead has led to a very charged atmosphere.”

A lot more people than Sunday and Tuesday. Appears that neither the rain or threat of arrest has dampened people’s moods here. No sign yet of protestors moving from outside Bridewell police station in #bristol#killthebillpic.twitter.com/SpyaljYEcL

For 20-year-old David*, the atmosphere at the beginning of the week (Sunday 21) was “otherworldly”. He tells Dazed: “It was beautiful to come out after months of not protesting to see thousands of people come together. It was a lovely day until the police attempted to arrest peaceful protesters.”

David lists the injustices he saw over the following week: “On the first day, police had horses charge at a crowd of people who were sitting down, forcing us to run. On Tuesday, families in their own tents were attacked from the outside with batons and other forms of violence. On Friday, myself and a friend weren’t walking as fast as the police wanted (which was a sprint), so I was rammed in the back with riot shields. Also, once we’d been partially kettled in the city centre, we were faced with packs of police in a formation that went: police dog line, riot police line, and a line of police on horses.” David says the action “wasn’t the police trying to keep a city safe, this was predators hunting down their prey”.

Student journalist Robin was covering the protests on Tuesday 23 and Friday 26 for a university newspaper. She believes that the first protest was “hijacked by rioters” and that the “violent elements of the night were not representative of how the majority of protesters felt”. Though, she adds: “The police switched very quickly, both on Tuesday and Friday. Officers went from chatting away, and occasionally even laughing with protesters and the media, to violently charging at the body of protesters.”

“This wasn’t the police trying to keep a city safe, this was predators hunting down their prey” – David*

“On all the occasions I witnessed clashes, it was always the police who struck first,” Robin continues. “I was there as a reporter, and yet I’ve never felt as worried for my personal safety as I did at these protests. Police did not discriminate between peaceful protesters, those who were violent, and the media. I saw several protesters being hit by batons, and many more being charged at and hit using riot shields. I’ve even met people who claimed they were bitten by police dogs.”

Saranya says the media response has been “really frustrating”. She tells Dazed: “As someone who’s witnessed so much police violence against peaceful protesters, it’s so difficult to see how the dominant narrative has been about the welfare of police and the actions of protesters, rather than the other way around. The media response has also overlooked the core message behind these protests, which is that we’re literally fighting for our right to participate fully in a democracy; for our right to protest without being subjected to state violence. I’m very fearful of how authoritarian this government and its police have become.”

*Names have been changed