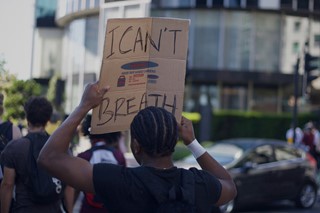 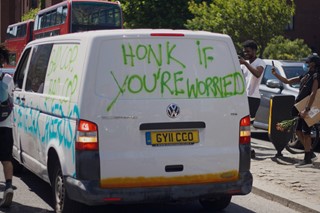 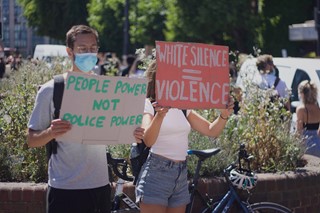 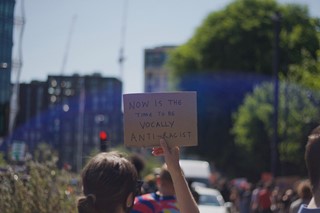 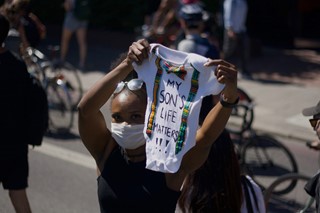 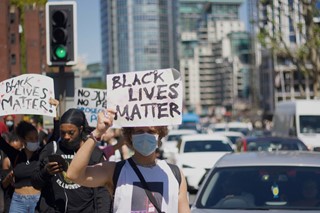 Thousands of protesters marched in London today (May 31) in solidarity with demonstrations across the United States, following the killing of George Floyd, an unarmed African American man, by police officers in Minnesota on Monday, May 25.

Protests sparked by Floyd’s death and other fatal shootings of African American people, such as Tony McDade and Breonna Taylor, have spread across the US in the past week. Many of the protesters have been met with resistance from police, who have fired tear gas and rubber bullets into crowds.

Today’s UK protests – in defiance of the coronavirus lockdown – were in London, Cardiff, and Manchester, and are part of the solidarity response worldwide, which has also seen marches in cities like Berlin and Toronto. In central London, demonstrators gathered in Trafalgar Square and outside the US embassy in Battersea, marching through Whitehall, past Downing Street, and the Houses of Parliament. Traffic on Lambeth Bridge was brought to a halt by a mass peaceful sit-in. Some protesters later appeared at Grenfell Tower in west London.

here in trafalgar square at the #BlackLivesMatter demo. hundreds of people shouting “i can’t breathe” and “stop killing us” pic.twitter.com/5N3OSN9TkB

“It was very important for me to turn out in support of the American struggle against brutality,” Delilah, a 19-year-old student from west London, tells Dazed: “And to highlight the very horrific racism issues we see in the UK at the hands of our own police force and government.”

“There’s George Floyd and Alton Sterling in America, and we have Rashan Charles and Stephen Lawrence. This isn’t just a US issue it’s a global issue, it affects all of us.”

The names of other victims of police brutality in the UK, such as Sarah Reed, Darren Cumberbatch, Mark Duggan, and Edson Da Costa, were called out at today’s protest. Chants of “I can’t breathe” and “no justice, no peace” rang out, and placards echoed some of Floyd’s final words. Distressing footage of Floyd’s murder shows a white police officer kneeling on his neck as he continuously pleads, “I can’t breathe”.

Other placards read: “white silence = violence”, “the UK is racist”, and “Black Lives Matter”. Buses and Parcel Force drivers were heard honking to the rhythm of the demonstrators’ Black Lives Matter chants.

“The whole place was very peaceful and well planned,” adds Jamie, 28, a photographer from London. “I didn't see any trouble, just people who really cared about the message.”

Due to coronavirus measures still in effect across the UK, activists also had to weigh up whether attending was worth risking catching or spreading the virus. “It’s a hard one for me because I get the idea of social distancing and I want to do so as much as possible,” says Jamie, “but I also see the need to protest when things really matter.”

still here outside the US embassy. hundreds if not thousands here chanting “george flloyd, say his name” pic.twitter.com/tuHLs0h3zY

“Yes there is a pandemic but racism has proven just as deadly,” adds Delilah. “We are here to shout about it and it definitely feels like a moment in history today.”

Yesterday, hundreds of protesters marched through Peckham, south east London. Chants included, “stop killing the mandem” and “the UK is not innocent”.

The Metropolitan Police have so far confirmed five arrests outside the US Embassy. Three of the arrests were made for violations of the coronavirus lockdown guidelines, while a further two were for assault on police officers. In a statement, the Met Police said: “Those arrested are aged between 17-25 years. All have been taken into police custody.”