As the UK passes another EU exit date, we speak to the people who didn’t get a vote in the 2016 referendum

Spring is here, the sun is shining, and it’s set to be a long, hot summer… of Brexit. As the UK is granted yet another extension, the never-ending chaos continues.

Despite offering to resign if MPs supported her deal, and asserting she wouldn’t allow an extension beyond June 30 (now fittingly extended to Halloween), Theresa May is, shockingly, still in charge. Not only has her deal been rejected three times, but the government has voted down every other possibility, including no Brexit, leaving parliament at an impasse.

It’s fair to say absolutely everyone is bored of Brexit, but for new voters, this long slog is particularly tiresome. Unable to vote in 2016, they were forced to watch silently as their future was decided for them.

In the days following the referendum, a report emerged that suggested the Remain vote would have won the majority had the voting age been lowered to 16-years-old. Brexit will undeniably have more of an effect on the younger generation, and given how vital 16- and 17-year-olds were in the Scottish independence referendum process, it’s baffling that middle aged MPs were able to block young people having a say.

As the UK remains in the EU almost three years after the referendum – with no conclusive solution in sight – the 16- and 17-year-olds from 2016 have now passed voting age, making them eligible to vote in a potential second referendum. With 74 per cent of these young people backing Remain, the voting landscape could look very different if the decision was put back to the people.

As today (April 12) marks the second date the UK was set to leave the EU, we speak to 10 people who have turned 18 since the 2016 referendum about what they want to happen now.

The UK government is pushing sex workers offline and into danger
The Put it to the People march, London31 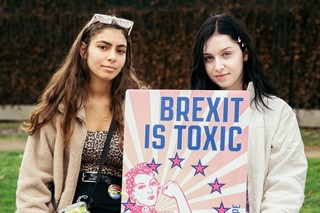 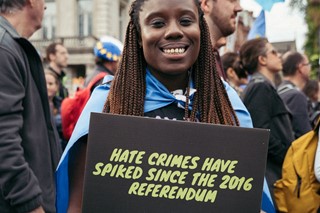 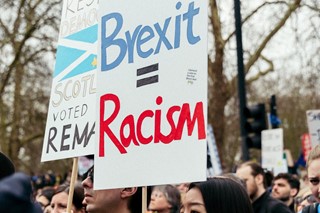 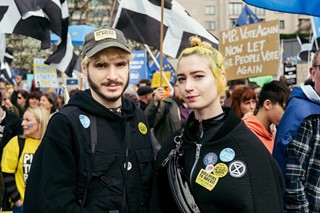 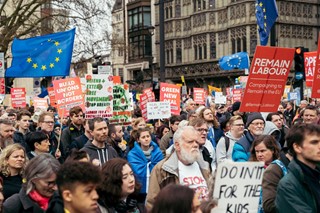 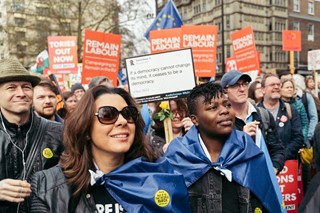 “I remember watching as the House of Commons blocked attempts to allow 16- and 17-year-olds to vote in the referendum – I was absolutely distraught. It will be young people most affected by Brexit, so the idea that I had no say in the outcome was frightening. It’s an absolute myth that young people aren’t interested in politics, it’s just that we’re systematically denied the opportunity to have a say. I felt totally let down by MPs, and completely isolated from the political process; I suppose the only positive was that it drove me to take a much more active role in politics.”

“It seemed only logical to me at the time that the voting age should be lowered to give young people a say on an outcome that affects our future. The potential harm to the economy and loss of jobs is frightening, and not to be taken lightly. After two and a half years of ‘negotiation’ there isn’t any progress, just three failed deals and a parliament more divided than ever. If anything, the government has gone backwards since the outcome; the Conservative party has been naive of the potential risks of a no deal Brexit, and only now are things starting to be taken more seriously.”

“As a young person who was politically engaged, it was incredibly frustrating to be excluded from the democratic process (in 2016) when the result would affect my future so greatly. The decision to exclude 16- and 17-year-olds was largely based on the assumption that we did not know what we were voting for. The irony of this is clear due to the fact that not a single person permitted to vote knew they’d be voting for the hugely damaging and chaotic mess that Brexit has left us in. Those of us who were aged 16 and 17 during the referendum are now eligible to vote, and yet we still have to watch our future be debated while being denied any say at all.

The only way out of this mess is to give power back to the people and allow us to make an informed decision with all the facts and none of the lies. The discourse around the 2016 referendum was dominated by lies, fear-mongering, and electoral cheating, and the reality of leaving the European Union could not be further from what was promised by those advocating to leave. The blatant recklessness and severe lack of transparency demonstrated by the government has posed a very real threat to the integrity of our democracy.”

“Despite being of age to serve in the military, pay taxes, get married and have a child, I wasn’t allowed to have a say on my future in 2016. Ultimately I felt sad because I know I was silenced in protecting my future, and the future of my children and grandchildren.

No matter how many times the government says ‘Brexit means Brexit’, ‘Leave’ clearly means different things to different people, as MPs on both sides are vying for different Brexits, all claiming it ‘delivers on the referendum’. Given how vague it was, the referendum set any subsequent government up for failure. Our country is succumbing to isolationism, and becoming inward-looking and unwelcoming to others; we’re turning our backs on our closest neighbours, rather than being a part of the worldwide community. It’s a tragedy. A People’s Vote is the best, most democratic scenario. This time, let me vote for my future.”

“I felt like my future was being decided without me, I felt absolutely powerless. Over 70 per cent of 18-24 year olds voted Remain, which demonstrates that the majority of my generation wants to stay in the EU. With issues like the cost of housing and the generational wealth gap affecting the prospects of young people, I definitely think those who were 16 at the time of the EU referendum should have had greater input and been taken more seriously.

I believe that the best thing to do now is put the vote back to the people once a deal has been agreed by parliament. At the moment we’re in a country that’s vibrant and full of colour, but now it seems we want to turn everything to a dull grey.”

I’m 18 and I couldn’t vote in the EU referendum. This is going to impact my future to a large extent and to be honest, I feel my future has been taken away from me. We young people are being stripped off our European citizenship and we didn’t even have a say in the matter

“I had to sit and watch a referendum that would define my future three months before my 18th birthday. Jacob Rees-Mogg said we won’t start to see the positive impacts of Brexit for 50 years – that would be my whole working life. And that’s an estimate from someone who supports Brexit; it’s actually mind blowing.

I’ve been campaigning with Our Future, Our Choice over the past year, and have marched with over 200 other young people demanding to be heard. There’s definitely a momentum among young people to take back our future, so I have no doubt that if we were given the chance, we would turn out en masse to vote again. In our current situation I really can’t see a way for us to get a good Brexit deal. I’d like a second referendum, and for the people to have a final say, but ultimately I would like to see Brexit revoked.”

“I was incredibly disappointed, but unsurprised that I wasn’t able to vote on my future in 2016. Denying 16- and 17-year olds the vote on Brexit was short-sighted, I’ve been able to vote for three years now and Brexit is still ongoing, I’ve never had a say. Brexit will impact my future in every way imaginable, I can’t think of a single area of life that won’t be affected.

I’ve been intermittently active as a Labour member since 2015, but I think Brexit has made me more politically active – I’ve been on more marches, signed more petitions, and been more vocal since 2016. Young people are having part of their identities taken away, along with things like Erasmus and freedom of movement. We weren’t listened to or even allowed to voice our views in 2016, so can anyone really be surprised we’re fighting to be heard now?”

“I think Brexit has made me more politically active – I’ve been on more marches, signed more petitions, and been more vocal since 2016” – Ben Willis

“I campaigned for, and would have voted for, Remain. The EU is all I’ve known and although it’s not perfect, I’m proud to be an EU citizen. It was frustrating to be denied a vote; after the result, it was depressing. Although it would have been closer (if the youth voted), I still think Leave would have won. One of Leave campaign’s successes was inspiring people who wouldn’t usually vote; the increase in turnout was huge and most of it came from Leave-voting areas. It’s clear Vote Leave lied, but they knew which lies to tell. It doesn’t matter if you’re right if no one believes you. If there’s one good thing about Brexit, it’s that it motivated so many young people.”

“Being a dual national with both British and German citizenship, the European Union has been incredibly important to me. Young people have grown up with the rights and privileges of having an EU passport, and that’s now being taken away.

The only democratic way to get parliament and the country out of this deadlock is by putting May’s deal back to the people in the form of a People’s Vote, and I strongly believe 16- and 17-year-olds should be able to participate. When the referendum was held in 2016, it wasn’t clear what Brexit actually meant, or its impact. Now the prime minister has come back with this shambolic deal, we know more than we did two years ago. In a democracy, the people should have the right to change their minds.”

“I primarily felt an overwhelming sense of helplessness, rather than anger (during the referendum). The Brexit vote notably marked a realisation of my own political naivety – an awakening to the concept that politicians use the discontent of real, working people to advance their own political positions.

We’re too often stereotyped as an apathetic youth, uninterested in politics and consumed by social media; this stereotype encouraged people to underestimate and ignore the youth vote in 2016, working to the advantage of Vote Leave. We only have to look at how young people were mobilised by the Scottish independence referendum of 2014 to see the impact we could have had on the outcome of Brexit. It’s our future that will suffer the most, and it’s heartbreaking to accept the uncertainty of this future when it was essentially dictated for us. Brexit is not the taking back of control; I have considerably less control over my future now.”