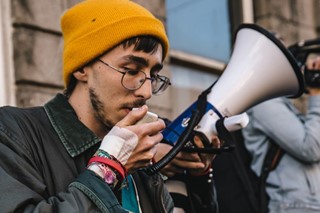 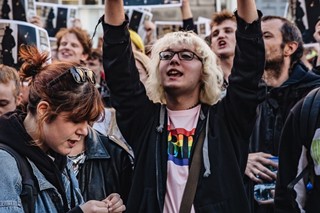 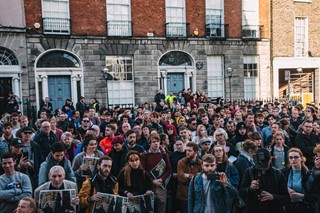 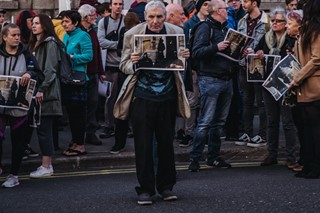 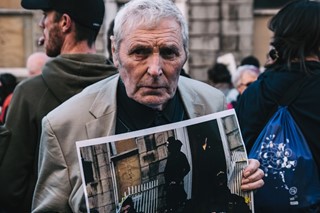 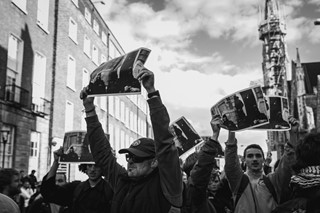 On Tuesday evening, a group of about 20 unidentified masked men arrived at a premises in Dublin’s North Frederick Street to carry out an eviction. As they forced open the front door and entered the building, a row of Gardaí (police officers) prevented bystanders from intervening. A number of the occupants emerged with injuries and visited the hospital afterwards.

The building, which had been empty for a number of years, was hosting activists from Take Back The City, a protest group bringing attention to Ireland’s housing and homelessness crisis. The group – primarily made up of young people facing escalating rents and dwindling prospects of ever owning a home – have occupied multiple buildings across the city in recent months, and are steadily growing in numbers.

Activist Andrew DeButler had been inside and found himself confronted by the masked men: “We were sitting there having a small bite to eat and a cup of tea when an angle grinder starts coming through the door, and then sledgehammers started breaking windows,” he tells Dazed.

“We were all in breach of an injunction – so we were technically breaking the law – but in our eyes, when there are 10,000 homeless people and 100,000 empty homes, we’re in the right.”

This is a serious own goal for the state and I hope it’s all over the papers tomorrow. It visually echoes everything from the Ra to the Regency hotel shooting, to old lithographs of bailiffs evicting people during the penal laws. Fuck landlords pic.twitter.com/Em2zslekew

DeButler, who is currently spending 80 per cent of his income on rent, says he was thrown down the stairs as he tried to leave, badly cutting his hand in the process. This is not the first time Gardaí have been accused of using excessive force during an eviction – in August, members of the Emergency Response Unit, which is often used for counter-terrorism, removed squatters from a premises in Cork.

Outside the North Frederick Street building, activists trying to resist were accosted by the police. Among them was Séamus Farrell: “We were videoing and confronting them and the Gardaí jumped on me, arrested me then and there. They pulled me down the steps and pushed me against the wall onto the side of the street,” he says. Farrell was placed in the back of a van and brought to the nearby Store Street Garda Station. Six people in total were arrested, but were released hours later following an impromptu demonstration.

Last week, Taoiseach (Prime Minister) Leo Varadkar told the public that there would be no ‘quick fix’ to Ireland’s housing and homelessness crisis. His party, Fine Gael, have been in power since 2011 and overseen it’s escalation: the average cost of rent has increased by 60 per cent nationwide since 2012, with Dublin city increasing by a gargantuan 72.9 per cent. Renting a one bedroom apartment is now impossible for a person working a minimum wage job. Currently, one-in-five TDs is a landlord, which homelessness campaigners have said could result in a conflict of interest.

Minimal government action taken to combat the crisis has thus far been a failure. In December of 2016, Dublin, Galway and Cork saw the introduction of Rent Pressure Zones, in which rental costs could only be increased by 4 per cent per year and legal barriers were put in place to prevent evictions. Landlords, however, were quick to exploit a loophole which allows for evictions if a ‘significant renovation’ is to take place, fostering a situation in which countless houses are being haphazardly refurbished only to reemerge on the rental market at increased prices which would have otherwise been illegal to charge.

Shortly after Tuesday’s eviction, pictures of Gardaí protecting the unidentified men began to circulate on social media, prompting outrage. The following day, about 1,000 people assembled at North Frederick Street before marching to nearby O’Connell street, where a sit-down protest brought rush-hour traffic to a complete standstill for over an hour. The group then marched to Belvedere Place, where another building is being occupied.

“It shows the action that the Gardaí are willing to take on behalf of very wealthy landlords, but not for people who are suffering during the crisis itself”

“My flat was burned down six months ago and social services will not give me a six month bed until I surrender my tenancy,” says Darren McCreary, a homeless man attending the demonstration. “And then what am I gonna do after that six months? I have a four month old child. I need somewhere to bring him. I’m sleeping rough the last four months.”

Civil liberties groups and politicians have also expressed anger at the treatment of the activists. Ruth Coppinger, a TD with People Before Profit, says that she, and a lot of others, were shocked by the images she saw. “Really, I’m here to express my outrage at what happened,” she explains. “It also shows the action that the Gardaí are willing to take on behalf of very wealthy landlords, but not for people who are suffering during the crisis itself.” Meanwhile, Amnesty International expressed concern about the potential use of excessive force.

Thomas, an activist with Take Back the City who would prefer not to give his last name, says that demonstrations will continue as long as the government remains indolent on the issue of housing. “We’re after escalating every step of the way,” he says. The group is demanding that vacant buildings around the city are purchased by the state and used for housing, and that rent overall is dramatically reduced: “It’s gone way past what’s sustainable in any kind of way for the social fabric of this city at this point.”

He explains that it’s not necessarily about the actions of specific politicians, but about how the country treats housing and property in general. “Leo Varadkar or Eoin Murphy; they’ll be gone eventually. We’ll have someone else. The real problem is slum landlords, who are raising the rent more than the allowable amount, making huge profits off the suffering of people who are in housing difficulty. It needs to stop… I think it was necessary for us to demonstrate the support and the social power that we’re building up here. People are angry enough in Dublin to take over the streets.”