For his latest solo exhibition, the American photographer poses his human subjects with animals for a series of chaotic, cinematic and emotional shots 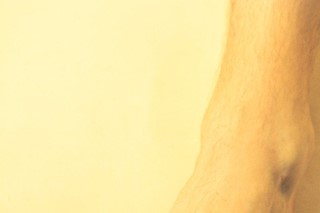 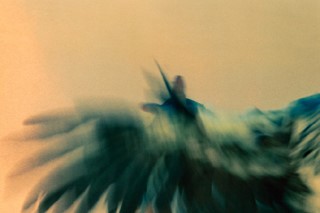 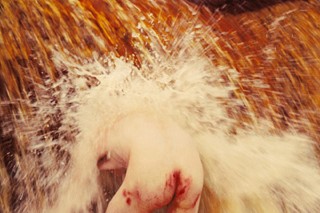 Photographer Ryan McGinley's work has forever shown youth, freedom and the joy of being wholly in the moment. He has taken us around the world, from rural American landscapes to seemingly otherworldly underground caves and now he has taken us to Somewhere Place, the title of his new exhibition at the Galerie Gabriel Rolt, in which he explores a darker, but no less adventurous, realm.

In his second solo exhibition in the Netherlands since his much talked about exhibition at FOAM in 2007, his work moves into even more cinematic territory, featuring the raw and surprising moments between people and animals and, as we discovered, is the first time McGinley has incorporated colour studio photography. We spoke with McGinley about beauty, working with animals and new ways of capturing humor and movement.

Dazed Digital: What is the idea behind this exhibition?
Ryan McGinley: The title of the show is 'Somewhere Place'. It’s a new body of work that I’ve made in the past year. It’s a mixture of photos taken in natural landscapes and studio portraits. It's the first time that I’ve ever incorporated colour studio photography into my work. I think the photos are looking even more cinematic now. There’s the sky and storms and animals. It’s about being out in the wild, among nature’s forces.

DD: Obviously, you've grown so much as an artist, but I wonder, how do you maintain the freedom and delicious sense of surprise you had when you began?
Ryan McGinley: I’m always being surprised, that’s what’s fun about being a photographer. You never know what people are going to do or how things are going to end up looking. If I knew what I was going to get from the beginning, that would be boring. That’s why I set up very active, kind of chaotic shoots. Especially when you put a person and an animal together. Animals are uncontrollable, and the emotional response of a person to an animal is a warm, raw emotion to see. Animal days are the most fun.

DD: I understand that you go through a lot of film and photos when you work. How do you know exactly when the image is perfect, whatever the mood or idea? Is there a common thread or statement that you're looking to capture?
Ryan McGinley: It’s about working hard. You can’t come to a great picture without taking a lot of bad ones too. It’s working and waiting, and then you’re rewarded with a happy accident. I shoot for hours and hours in a whirlwind to get one perfect picture. Most people don't have the patience or the wherewithal to do that. You have to be crazy and obsessive to shoot for 14 hours straight and then sit and edit for another 14 hours straight. But that’s how I do it. I narrow it down until I get to my vision. It’s just a gut feeling.

DD: In many ways, both wild and domestic animals seem to be the perfect subjects in your work and in this exhibition. They are free, maybe the freest beings, which experience pain unapologetically, as a vital part of life. Would you say this is true?
Ryan McGinley: I like to photograph animals because they’re so squirmy and surprising and cute and they crawl on you. They’re playful. Like the turkin I shot—it’s a hybrid of a turkey and a chicken—it was so punk rock. It had so much attitude. And people love interacting with animals, people become very unselfconscious when they’re playing with animals, and it’s fun to shoot that. It’s also funny, like watching YouTube pictures of kittens playing. Taking that silliness but making something beautiful out of it.

DD: What do you want to show with this exhibition that you haven't shown before? Is there a side of you that you haven’t expressed yet?
Ryan McGinley: I think this work is a bit darker than before. A lot of the photos are shot at night, in stormy weather and apocalyptic-looking skies. Some of photos are almost hard to look at, like the one of the body covered in cuts and bruises, or the turkin in between the girl’s legs, with the tampon hanging out of her vagina. It’s a kind of gross side of physicality that I’ve never really dealt with before

DD: Through your work, you're creating this world where we want to live, at times simply and at times quite decadently. How do you feel it's changing, evolving, from this exhibition and beyond?
Ryan McGinley: I wouldn't say the world I create is decadent. I would say it’s dreamy or adventurous, but it’s hardly decadent. We’re traveling in a bus and camping every night. We make s’mores. In terms of evolving, well, I guess now there are animals in the world too. There’s humour and darkness. I’m just always looking for new landscapes and new people and new ways to capture movement. New Experiences. It’s always something new.

DD: What is next for you?
Ryan McGinley: I never really know what’s next. I’m going to watch the Oscars and eat vegetarian meatballs. That’s all I can tell you about the future.