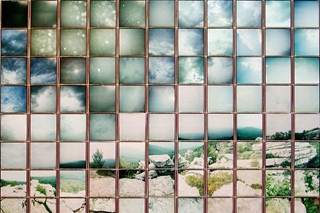 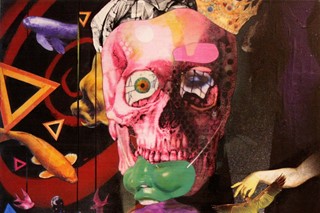 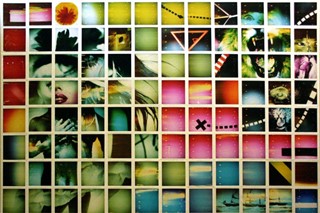 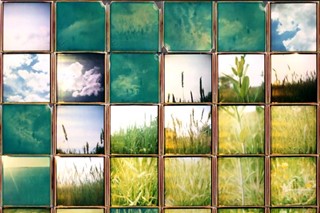 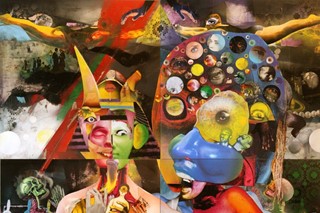 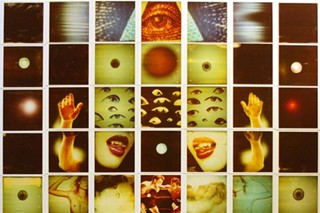 Initially studying computer and stop-motion animation, New Yorker Patrick Winfield has since moved onto graphic design, painting and photography. Working across a variety of mediums, it's hard to pigeonhole this talented creative into any one role. Since 2006 he has been creating spectacular large-scale grids of Polaroid integral film, uniquely reinterpreting how we conventionally see this instant film. “Joining fragments together to make a new, whole, image”, he also works with found imagery and paints to create surreal and sublime collages. Here, we speak to the skilled image-maker about his work and the death of the Polaroid.
Dazed Digital: There are two very different strands to your work – your “Collage” and “Portfolio Composites”, how would you define what you do?Patrick Winfield: My work is about juxtaposing various elements to make something new, playing with the familiar to form some fantasy. A recycling of imagery  to create new symbols. I draw with my camera and film or with found
images and the xacto knife.DD: Would you say they correspond to one another at all?
Patrick Winfield: The viewer can focus their attention on one element/piece of film within the collage/composite and then pull back and take in the piece as a whole. This push and pull of the viewers eye is present in both mediums. Both are about the journey.
DD: What are you trying to communicate through your work?
Patrick Winfield: Nothing and everything. Escape and too stay rooted. I try to make images that I would want to see. Sometimes I come pretty close, other times I fail spectacularly.
DD: What inspired you to start using and displaying Polaroid in this way?
Patrick Winfield: A friend got me into the film. She was manipulating the surface of the films and using collage in a way  that was new to me. Then I dove right in and discovered artists like David Hockney and Lucas Samaras.
DD: Is the Polaroid dead?
Patrick Winfield: Yes. However the Impossible Project film may be its reincarnation. This film is still in it's infancy but it already has captured so many artists attention, including myself.
DD: Collage has made a huge revival recently after being the medium of choice by Pop artists like Peter Blake and Richard Hamilton in the 60s, are you inspired by any other collagists and how is your work different?
Patrick Winfield: So many! Joseph Cornell, Romare Bearden, Rauschenberg, Hannah Hoch, Fred Tomaselli, Peter Beard, Shepard Fairey, Elbow Toe, Judith Supine... etc. all the way down to the commuter that alters a subway platform ad poster to make something funny or new as they wait for their train.
DD: What has been your proudest achievement artistically?
Patrick Winfield: It would be a toss up between having my family and friends at my first solo showing, and sitting and contemplating my first large scale composite alone in the studio and knowing I created something I truly loved.
DD: What are you working on at the moment?
Patrick Winfield: Experiments with the new Impossible films and creating portraits with found imagery shot off of various screens and mixed with straight photography.
DD: What is your biggest ambition in terms of work?
Patrick Winfield: The 1/4 Mile piece.DD: If you could sum your work up in only a few words what would they be?
Patrick Winfield: Fragmented yet focused.
Read More