A new kind of instant film may be on its way but in the interim, Paul Giambarba, designer of Polaroid's iconic look has repackaged the last of the original film. 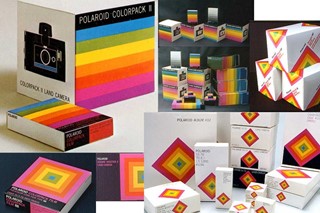 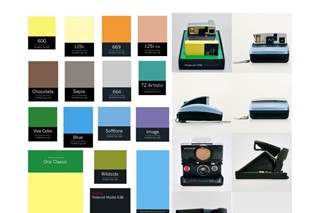 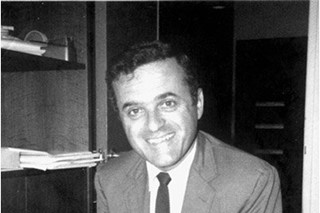 Ever since the announcement that the production of analog Instant Film would cease, there have been numerous projects taking up the cause of prolonging this much-loved medium, but the one which probably has the legs to actually take action is The Impossible Project. Founded by analog film enthusiast Florian Kaps, it has acquired the complete film production equipment in Enschede (NL) from Polaroid, signed a 10-year lease agreement on the factory building, and is now currently working with an experienced team of Integral Film experts to re-invent instant film for vintage Polaroid cameras. The Impossible Project are hoping 2010 will be the year this new type of instant film will be unleashed but in the meantime, they look back to what made instant film so iconic by teaming up with Paul Giambarba, the man responsible for creating the design of the best-known Polaroid films.

He documents the entire duration of his freelance gig at Polaroid and how he created those ubiquitous Polaroid colour stripes on this blog The Branding of Polaroid as well as pointing out the branding faults that Polaroid subsequently actioned. Now together with The Impossible Project, Giambarba presents the last of the Polaroid film repackaged in a limited special edition designed by Giambarba. Simplicity is still key in these repackaged films and in addition, Giambarba has presented his own edition of the SX-70 land camera, digital timer and Polaroid One camera kit. Dazed Digital speak to the candid Giambarba, who currently resides in Cape Cod, about where it all went wrong and why those stripes are still remembered.

Dazed Digital: Did you have any idea how iconic the packaging of the Polaroid film would become and what do you think it was that made the packaging so enticing? Paul Giambarba: No, not at all. I think it's become enticing because of the proliferation of visual pollution in the marketplace. Once upon a time in this country some of us tried for classy, even elegant, on the premise that for design challenges, less is indeed more.

DD: Are you a keen photographer yourself - do you use Polaroid film and how do you feel about its demise?Paul Giambarba: Yes, I am and would add this. (Edwin) Land (inventor of instant photography) was a photographer, so was executive vice-president Stan Calderwood, who made my initial efforts at creating corporate image and product identity possible. The last CEO has worn a perp's orange jump suit until he exchanged it for federal prison fashions. I'm not aware that any of the Seven Dwarfs who preceded this convicted felon knew how to take a decent photo, let alone run a company such as Polaroid.
I have used lots of Polaroid film and cameras in the past, my favorite being the Model 100 and peel-apart film. Doubleday published a trade book of my photos taken with this off-the-shelf equipment in 1970.
I feel outraged by Polaroid's demise and the financial rape of its pensioners. As a freelance "lifer" I had often wished I had joined them as an employee but I couldn't abide the interminable meetings and hubris.
DD: On your blog, you document the various stages of branding Polaroid has undergone, when do you think it all started going 'wrong' as it were?Paul Giambarba: I developed product identity that, to use a musical term, ran counterpoint to Polaroid's corporate image, beginning in 1958 with Stan Calderwood. I recruited Peter Wensberg the same year, and trained Bill Field to become art (later, design) director. All went exceedingly well until 1980 after Stan and Bill had left, and Peter bought into developing a logo. Though I was a member of the Polaroid Design Council I was not allowed to participate in further meetings. I might also add that I was never invited to any of the dinners in which they picked up prestigious awards for my work. My parting shot was, "Congratulations on choosing a type face that is on all the toilet doors in every major airport in the world."
That pretty much ended my career with Polaroid but It had to be said.
I consoled myself with the fact that anything over 25 years is an extraordinary lifetime for a freelance account. Furthermore, no designer can work in a vacuum and must have simpatici counterparts within the client organization. This was no longer the case, so until I met up with Dr. Florian Kaps I had been 26 years between gigs.
"And so it goes," to quote Kurt Vonnegut, a former Cape Cod neighbor.
DD: What are you working on currently?Paul Giambarba: A book, of course. Isn't everybody?