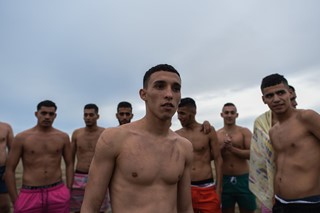 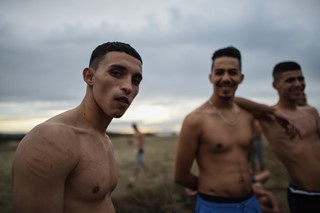 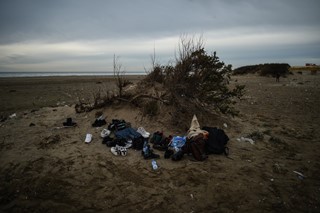 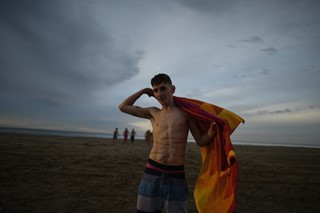 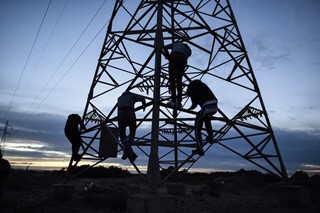 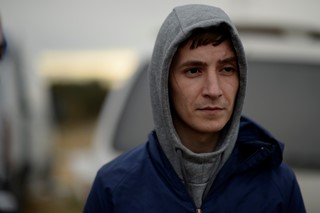 Benjamin Loyseau captures the enduring hidden emotions that persevere through stories of conflict or human strife. Through his photography, Loyseau implores us to find empathy in the individuals who otherwise become lost in the wider stories that surround their lives. From the stories of refugees fleeing war-torn nations and oppressive political regimes to Native Americans defending their land on Standing Rock, Loyseau uncovers the stories that to the wider world become distorted through regular news filters.

Loyseau’s work has taken him from his native Paris to the Middle East and the ‘Old Dreams’ embedded in the historic conflict between Israel and Palestine. He was on the ground in 2011 when South Sudan became its own independent nation, and through a twist of fate found himself in Cuba when Donald Trump was elected President of the United States. As the official photographer for the first refugee team to participate in the Rio 2016 Olympics, Loyseau’s work found acclaim on the world stage; portraits that became enduring testaments to human endeavour in a time when those merits are vital in celebrating.

Loyseau’s latest subject matter, however, feels somewhat closer to home. His friends, cousins Jonathan and Guillaume Alric, together form the electronic music duo The Blaze, who’ve earned a reputation for their emotional, bass-heavy tracks – not to mention their equally spectacular music videos, which have found fans in Moonlight director Barry Jenkins and Greek-French filmmaker Romain Gavras thanks to their delicate portrayals of themes like freedom, youth, masculinity, and brotherhood. Loyseau was invited to take press photos of The Blaze on the shoot of their “Territory” music video in Algeria, but despite spending three days with the band, he instead ended up photographing the people he met in the country rather than the band themselves, exploring the hidden cultures of Algeria through a series of behind-the-scenes shots that bring new visuals to an idea of youth identity not too dissimilar to our own.

What draws you to the topics that you explore? The human effect and human emotion seem to fuel quite a lot of the stories you work with.

Benjamin Loyseau: It depends really, because it’s never the same topic. I was drawn to Rwanda because, as a Frenchman, we were unfortunately linked to the genocide there 20 years ago. I really wanted to see and investigate what happened there, how the survivors can live in the same village as the killers, how you can almost share a house with the person who killed your mother or father. For me, my curiosity forced me to go there and document this. Each story is driven by curiosity, to understand what happened in these places and tell a story that brings attention to these issues. Sometimes it doesn’t happen, but sometimes it does. When I was working on the Lake Tanganyika story in Burundi in 2015, you had thousands of people fleeing the country, which was causing a big humanitarian crisis in the neighbouring countries. We were the first people to get the story, which we took to the UN, and after that they made humanitarian efforts to help them and rescue them. So on that specific case, we did something and it worked.

When investigating these conflict areas or any form of humanitarian or social crisis, is there a fear that you may become desensitised to these situations? Even for someone like yourself who isn’t on the frontline of these conflicts?

Benjamin Loyseau: It’s quite exciting working in these places, but you can become addicted to this work. If you see some atrocious things then there’s an adrenaline that you hide behind, but that only kicks in once you know you’re relatively safe. At the same time, you know that if you’re a sensitive person – and most people are – then it really can hurt you. I really respect some of the real frontline photographers I know who have really seen (things that are) ten times worse than anything I have. But of those who do that work? I don’t know anybody who doesn’t suffer with some form of trauma. Post-trauma isn’t reserved for military personnel or soldiers – anybody involved in these kinds of things pays a price. Personally, I don’t want to have too many nightmares and I’m more interested in documenting the personal, human stories from these places. I like to see the beauty in a lot of things.

Do you have to, or try to remain neutral when you’re investigating these stories?

Benjamin Loyseau: Well, I wasn’t very neutral on that story (Rwanda). I chose my side. 20 years later, the French government still deny their involvement, even though the facts are all there. So when I was there – and I’m not necessarily proud of being French – but it was the first time I felt ashamed of being French. The lens is a bit of a filter in that way. You need that filter to understand why you’re doing this. People are so desperate in some of these situations that you’re not taking a photo unless you’re going to use it or if it could help. So in that (case) you need a camera just to hide your tears, focus, and get the story out there to try and do something.

That feeling of shame or embarrassment about being French, do these sorts of emotions drive your ongoing work in any way? Your Talents in Exile piece for example, do these emotions fuel a mindset?

Benjamin Loyseau: Definitely. As a refugee you start from scratch with your life. You lose your confidence, your self-esteem, and you’re treated like a number. So in Talents in Exile I wanted my portraits to look good. I wanted the people I photographed to look like they’re on the cover of GQ or painted as an English portrait, not like poor refugees arriving in Paris. I wanted them to be proud of themselves and proud of their talents. I remember photographing a refugee who left Russia for political reasons but was very embarrassed by that. I’ve seen her again quite a few times since then and she tells me how before I took her picture she never accepted that she was a refugee and she was ashamed of that, but seeing the photo made something click in her mind. She was proud of her journey. She was shy when I first met her but now I see her dancing in really trendy clubs in Paris at 2am. It’s little stories like that which are really nice. It’s rewarding.

How has the reaction in Paris been to those works? Especially in the lead-up to what’s becoming another disappointingly relatable election.

Benjamin Loyseau: Our main goal is not about the 20 refugees we photographed as such. If we managed to help those 20 men and women, that’s great, but it was about changing people’s opinions and people’s mindset on refugees. It’s just a drop in the ocean, but if it helps to change the perception that people have towards refugees even slightly then I think we’ve succeeded.

It’s like enforcing the sense of identity in your stories to the wider world. In your work for the UN or the Paralympics I get that in a big way. Your behind-the-scenes work on The Blaze videos explores these subjects too – youth cultures from behind closed doors in places hidden from wider view. It shows these shared concepts from youth culture across the globe, how everyone just wants to dance, listen to music or get a little fucked up.

Benjamin Loyseau: The funny thing about it was that all the actors came from different neighbourhoods with built-in rivalries, and I remember shooting them was like a game, almost. They didn’t want to have their pictures taken and had a ‘Who are you?’ attitude at first, and then you leave them alone and they come back and it went on like that. It was like a game of seduction, but after a while we made friends and smiled. They had a lot of energy. They were funny, tricky, a bit naughty, fun, creative.

I felt really comfortable shooting there in Algeria, actually. Personally, I really wouldn’t like to be 20 years old in Algeria today. It’s not the worst place in the world obviously, but it doesn’t seem like there are a lot of prospects for these kids coming from a poor neighbourhood. But these kids probably have more desire and they probably have more dreams than the kids growing up a few years before them. They know what’s going on outside in the world. Everybody knows how they live in Paris or in New York. People have a dream of fame and getting out of there.