While he is best-known as the man who decides your fate at Berlin’s infamous club, Marquardt’s true passion is black and white analogue photography

Berlin is a city bathed in mystery, thanks to its complex history and the fascinating characters that line its streets. Following the 1989 fall of the wall, the face of the German capital changed immeasurably – something that nobody could prepare for – and Sven Marquardt has been there to see it all.

Marquardt is perhaps best known as the head doorman of Berghain, the electronic music mecca that has become arguably the world’s most notorious club and, as of this month, an institute of high culture in the eyes of the German court. It is spaces like this that contribute to Berlin’s undying sense of drama, owing in part to Marquardt and his team for ‘curating’ the hedonistic weekend-long parties that lie at the other side of the infamous queue.

What a lot of people don’t know is that, beyond the images of Marquardt’s face tattoos and piercings as well as the many long-reads on how to get past him into Berghain, he is a gifted photographer. He has spent the last 30 years capturing the city’s unique individuals – from the eccentric to the delicate – translating their personalities into dark, captivating photographs to produce his latest series, Future’s Past.

The powerful body of work has been channelled into book format, and this year went international with exhibitions in Sydney and, most recently, Ibiza. As his showcase on the White Isle comes to a close, we asked Marquardt about how Berlin has altered over the years, the stories behind his most eye-catching portraits, and how it feels to be considered a cult figure by so many. 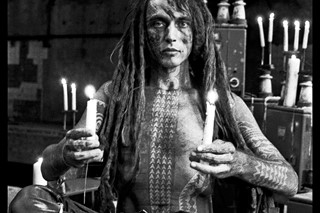 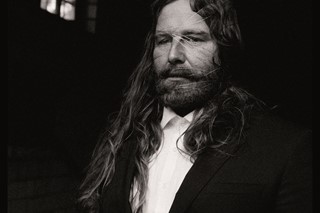 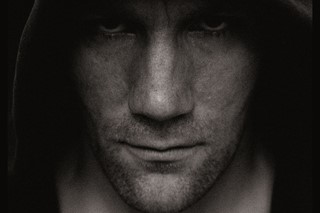 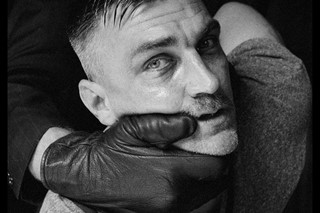 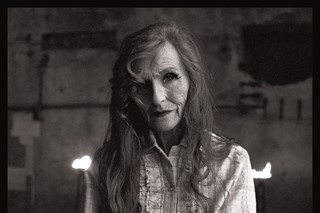 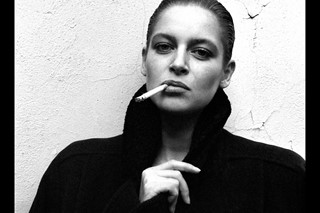 How did you first get involved in photography?

Sven Marquardt: East Berlin was dominated by punk  and new wave in the early 80s. At least for us, the so-called ‘bohemians of Prenzlauer Berg’, residents of the local scene of creative young people who took part in the refusal of dictatorship in particular. My camera became a stylistic device in my – in our – attitudes towards life. I think that is something which has remained the same, even today.

There was a long period where you were doing less photography. Why was this?

Sven Marquardt: 1989: the wall fell and with it a form of society. Something that nobody escaped untouched, irrespective of how much or how little you conformed with this country. Berlin was a separate city for 27 years and many places became no-man’s-land. Flats, whole houses, factories, and wasteland… Whole streets were occupied. It was anarchy, and nobody seemed to know how things would go forward. Like so many, I had hoped for a breakthrough – then it came. Nobody was interested in my photos. They had a different image of the DDR (Democratic Republic of Germany)! “I don't give a shit”, I thought. I put my camera away in an occupied house and dove straight into the club scene. Taking photos wasn't important anymore, but it was also a loss to my own identity.

Do you think your artistic style changed at all after that time lapse?

Sven Marquardt: There are a few fundamentals in my photography. I still work almost completely analogue, always with daylight, my priority being black and white (but not only), and I never simply walk through the town with my camera, searching for the right motive or moment. I have walked around Berlin a lot, looking for places, lighting, and inspiration. But my camera isn’t there. Sometimes I make notes and take a few photos on my iPhone as an outline.

For years, I’ve landed more and more in conceptual photography. Since 2005, I’ve sometimes shared the production with other artists, I search for lights, sets, opportunities. There was an interesting conversation at the Hangar / Ibiza exhibition, where visitors couldn’t always assign my photographs with an era. For example, the photo of a young woman from East Berlin was taken in the 80s. If and when I successfully capture an image with a certain timeless nature, it’s simply amazing, and, of course, I don't think about the year of origin.

Why do you choose to shoot only in black and white?

Sven Marquardt: When I think back to East Berlin, I see a lot of things in black and white. They are definitely lovely memories, and in my memory, my mentors and role models stay in black and white. (Black and white) dominates, and I fully love – and live – through the drama that comes with it. Without light, there is no shadow!

Can you tell us how you decided on the title and theme of Future’s Past?

Sven Marquardt: FUTURE’S PAST is the title of my first photo book. It comes from the quote from David Lynch’s Twin Peaks:

“Through the darkness of future's past.

The magician longs to see

One chants out between two worlds…”

I love the apparent contradiction between these two adjectives, that are so closely linked to one another, that merge into one.

The exhibition covers over 30 years in Berlin. Do you think the city and its people have changed much over time?

Sven Marquardt: 30 years is a damn long time and Berlin has completely changed. It has grown into a metropolis and I hope that nobody in the next 30 years simply passes by without a trace!

But for me, it has always been, and will always be my hometown, a town which was always the backdrop for my photos, and for my life. Only the characters have changed a few times. That's how it is when one grows older, and it is good to live through it. Some people don't have that luck. Meanwhile, I like to work with international creatives, and when my team and I do so we get involved with them, so that it's a form of family for me.

I travel a lot. It makes the “I” relative and makes you aware of your own tiny being. And when I land back at Berlin Tegel Airport I think “HA!” – how tranquil does it look here? This is Berlin? How cute. Especially when, for example, you were departing from Sao Paulo 16 hours ago!

“There is one more rule from me: never mention my pictures at the door (of Berghain)” – Sven Marquardt

You can’t simply allow everybody into Berghain yet your exhibitions are open to all. Do you see your photography as more accessible than your other work?

Sven Marquardt: For me, they’re of course two completely different things! I stand at the Berghain door, with my team, standing for the idea of the whole house. This is not a one-man show, damn it! We all carry responsibility there, for the guests who want to celebrate with us peacefully, who should have an amazing time. People sometimes not getting in is no concoction of Berghain, it happens all over the world.

I am thankful for everyone that visits my exhibitions, for the interest in my photographs, whatever their opinion of them may be.

How much does music impact your photography? Do you find yourself inspired by the artists that come through the doors of Berghain?

Sven Marquardt: House was an inspiration for me from the beginning. The architecture, then the sound, the guests, colleagues. I don't listen to any DJ sets at home, unless when we are shooting for a DJ or something similar and there is something I would like to know or experience beforehand. There has been so much which has inspired me: music, films, photographs. It is always the zeitgeist in combination with tradition that excites and challenges me.

How do you decide who to photograph?

Sven Marquardt: If I do conceptual work, I often search for special characters, stories, people above all, that can tell a story, which I guess is some form of an art casting situation. At least in my head, in my notes. However I spare myself the vain hope of anything, as in the end, I also want something from them. I think it has something to do with respect and I don't have to sell a product. Sometimes I just look at my colleagues in order to discover something after a couple of years that could be interesting for me.

Do you think you look at people queuing for the club in the same way as you look at your photography subjects?

Sven Marquardt: I look at the guests in a very different light than I do my photographs. Insofar as one remains inspired by the other, I am unable to say that. I separate it rather strictly. Also, that wasn’t the idea for doing this job at the door. Naturally, the people I see are sometimes inspiration for something that is going on. When I began to work in the Berlin club scene in 1993, that was also the time that I put my camera away. There is one more rule from me: never mention my pictures at the door. Even if I have broken this rule once or twice, it is better to separate the two from one another.

I personally find one of your most powerful photographs to be the one of the woman standing over the child with a moustache. Can you tell us the story behind this?

Sven Marquardt: The picture is for a record sleeve for DJ Len Faki. I think it is about opposites, young and old, fire and water, beginning and end. I needed a young boy and an old woman. The idea to paint the young boy with a beard was an idea of Saskia’s, who has been an integral part of my team doing hair and make-up styling for years.

On a side note, I find it (unnecessary) to explain photos and what lies behind them. It disenchants the photo! In the best case scenario, the viewer has their whole own narrative to the photo, and under no circumstances must that be mine.

Are there any portraits that are particularly memorable or poignant to you?

Sven Marquardt: The old woman from the Len Faki cover stood three – four metres in front of my camera. She lived on the edge of Berlin, always came to set on time and was on point. We understood each other well. One time she was two hours late. She looked annoyed, angry, but somehow also helpless. She lost her way on a 10-minute walk. She needed two hours. I know it didn't mean anything good. Despite this, we carried on shooting and as I saw her through my camera, I suddenly became aware of our farewell and I had to leave the set for a couple of minutes. I never saw her again after that.

You’re very visually striking yourself. Would you ever consider self-portraiture?

Sven Marquardt: Self-portraits haven’t interested me yet. Perhaps that is still to come? I have no idea! My appearance and the impact from the outside of course matters to me and vanity is not foreign to me. But would I then love myself enough to pose in front of my own camera?! No way! I leave that to the selfie and Instagram generation.

How does it feel to be considered a cult figure by so many people?

Sven Marquardt: Someone once said: “Nothing is more transient than fame and success.” That sentence stayed with me and I have pretty cool colleagues on the door and on my team. That grounds me! And perhaps one day my photos will remind people of a Berlin, that isn’t there anymore, if I’m not there anymore either. Something that remains – everybody wants that.