It isn’t over the top to say Japan has a rather unique and special relationship with the medium. No photobook is quite as amazing as the publications coming out of Nippon. Following in the footsteps of masters like Moriyama, Araki and Sugimoto and respected younger names such as Takashi Homma and Rinko Kawauchi, among many, many others, these ten artists prove that Japan is still the best place to eye new photographic talent. 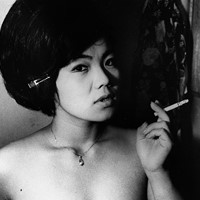 The best photographers working in black and white

Fujiwara’s images of the abuse of state power, policeman and brutality at demonstrations is just one of his hypnotic projects. Here the power is in the detail. His images deconstruct portraiture, exposing skin at its most transparent and textured, gaining him a solo show at the highly respected Japanese photo magazine IMA’s Concept Store in Tokyo as well as Issey Miyake’s space in the capital. Looking at these images, it's no surprise that he won the Japan Photo Award in 2014.

Currently based in Brooklyn, Kanno's work veers from the hauntingly beautiful such as the artist’s images of irises in beer bottles saturated in orange light, and a playful urbanity, capturing the world around him and in more staged fashion shoots. He has been included in numerous zine shows and worked with every Japanese mag going including Vogue, Elle, Nylon and Brutus.

This artist has been lauded by Foam magazine and exhibited at the respected Tokyo Wonder Site, getting attention for work with stark beauty. Whether approaching landscapes or nudes, her images feel exceptionally intimate and often haunting. There is something sexual here – in inspiration as much as result. Her book Crystal Love Starlight, named after a tacky restaurant whose owners were arrested for allowing prostitution.

Koyama’s abstract images resemble big photograph rainbows, colour hitting the viewer in deep vibrant waves. Showing in Zurich and based in London, Koyama is a self taught artist with a background in biology and that scientific background (as in the work of Carsten Holler and Olafur Elliason) gives a whole layer of narrative to work that functions as much on sheer visual impact.

Based in Tokyo, Akaishi has exhibitioned at some of the cities best spaces such as Take Ninagawa but was also included in the Tate Modern’s Offprint Art Fair. Coming very much from an art context, his work spills into sculpture and installation – photo covered objects taking over rooms and moving far beyond the gallery wall.

Narita studied in Kyoto and has exhibited largely in Japan but is already gaining serious attention for her photo books. She often captures details of spaces or landscapes – images blurring and spilling with light and movement. Sometimes she accompanies her images with poetic freeform narrative texts. The results are subtle, intimate and very beautiful.

Arata’s work is largely based around horror narratives and photography is just one element that is part of the mix including video, writing, movement and drawing. This work has a scrawled lack of restriction, which fills it with energy. Mino also wrote plays and has a theatre company Hippie-b that uses photographs as part of its performance.

Tanaka studied in NYC and relays an influence to the Abstract Expressionist painters of the 20th century. The restul are artworks that balance concrete, colour, and have a strong sense of geometric presentation when installed in exhibition. His latest works include beautiful scrawled layers of Pollock-like lines over more straight photographs.

Sugai’s blog is a brilliant play on anti-food photography. Rather than capturing it in its uneaten, pornographic form instead, we see a document of reality – the leftovers. The smeared grease and last bites in harsh, hard light. The results are addictive and hilarious.