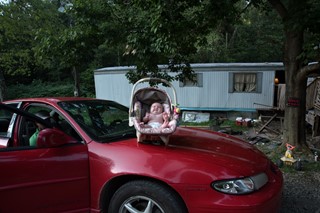 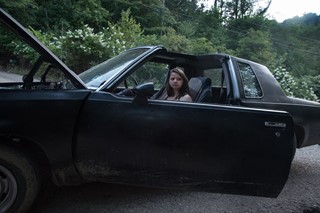 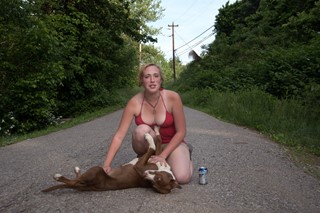 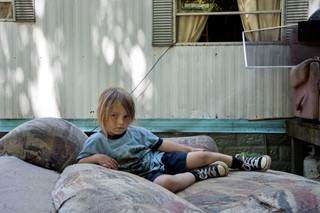 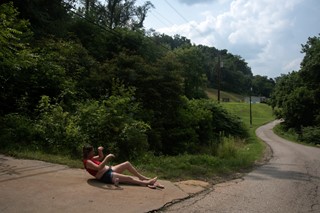 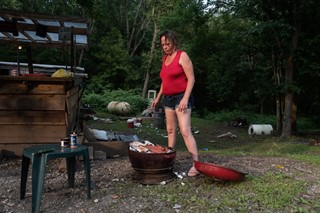 Kentucky-born photographer Stacy Kranitz has always been interested in outsiders. Since 2010, she has been working on As It Was Give(n) to Me, a photo-series taken in Appalachia, a deprived mountainous region in the eastern United States. In 1964, Lyndon B Johnson launched the ‘War on Poverty’, using Appalachia as the poster child of poverty in the United States. Since then it has become synonymous with deprivation, culturally ostracised and stereotyped.

Kranitz began the project when she was in Appalachia working on From the Study on Post-Pubescent Manhood and she decided to explore the central region more extensively, meeting strangers, making friends and sometimes lovers. Aware of the historical discourse of poverty defining the area, she started to actively seek out stereotypes to challenge and counter them. So, pictures of strippers, alcohol and drug abuse, and the KKK are interspersed with shots of verdant landscapes and people going about their everyday lives.

Alongside the photographs are fragments of found text and image that give a more nuanced, rich picture of the area and its people. Often controversial, Kranitz doesn’t shy away from violence and hard-living people, but never adopts a moral perspective or asserts her pictures are a universal representation of Appalachia. Instead, she questions what we think we know of poverty, forcing us to reassess assumptions.

These photos are from the postscript section of your project. What’s their significance?

Stacy Kranitz: This section of the work was made while spending time at one person’s house, in one road, in one holler and it’s a very intimate view of a group of people who aren’t in any way typical of the region. It focuses on my friend Pat, and his relationship with the community. I just felt I couldn’t fold it into the larger narrative, so it became it’s own world.

I look at the photos as a very personal archive of my relationship to Appalachia as an outsider, and the reconciliation of a fantasy I had about the place with the reality that was so different.

“I’m trying to get the viewer to question what they think poverty is, and where they think it’s coming from” – Stacy Kranitz

What’s the importance of the idea of stereotype in your work?

Stacy Kranitz: I think inevitably through making work in a region that’s been so stereotyped and used as a poster child for poverty since the 1960s in America, I couldn’t go there without being aware of them, thinking about them and questioning them. I came face-to-face with stereotypes, but I tried to dig around and untangle them – I wanted to face these tropes head on and find ways of debunking them through images.

Why are you interested in portraying subcultures in your work?

Stacy Kranitz: I’ve always been interested in marginalisation and people that live in a way that it has been asserted on them that it’s wrong. I think a lot of that comes from my childhood because my thinking was very different from that of my family, and I felt very much like an outsider. I was interested in the idea of empathy as a tool to build a better world, which was naïve, I thought that we could make the world a better place if we connected to people that are different to ourselves. So, that was a very early impulse for me.

What is the importance of your portrayal of poverty in the pictures?

Stacy Kranitz: I’m very interested in the role of capitalism in our lives, and how it has created the idea that poverty is a bad thing. There are certain places where poverty is doing great harm to people, but sometimes people are proud and choose to work very hard instead of live on the welfare system. I’m trying to get the viewer to question what they think poverty is, and where they think it’s coming from. I hope people will think more about what pictures of poverty mean and how it has been fetishised.

You have sex with people in your photos, take drugs with them and sometimes put yourself at risk whilst making the work. What impact do you think this has on your photographs?

Stacy Kranitz: I would like to believe that has been going on forever. I think the reason why people find it odd in my case is I’m very open about it. I’m very wary to say that doing drugs with people makes me understand them better; I think that’s very false. I also think the same about sexual relationships. Ultimately, I’m interested in blurring the boundaries of my personal life and my professional life, as I find those boundaries problematic and unhealthy, so I try to find as many ways as possible to erase the barriers and bridge the worlds into one.

“I’m very wary to say that doing drugs with people makes me understand them better; I think that’s very false. I also think the same about sexual relationships. Ultimately, I’m interested in blurring the boundaries of my personal life and my professional life” – Stacy Kranitz

What’s the importance of power relationships in your work?

Are you interested in the subjective nature of photography and its inability to be objective?

Stacy Kranitz: Yes, in many ways I’m trying to take on the whole legacy of photojournalism, which I believe is a colonial construct. I’m disappointed we haven’t reconciled how we gaze at ‘the other, and there’s not enough discussion about the hand of the photographer. The idea that documentary work is a window into someone else’s world, or a true window is false – there’s too much information missing, it can’t tell you the whole extent of a person’s struggle.

Have you now finished your project in Appalachia?

Stacy Kranitz: No, I don’t believe in finishing projects, because that then builds in the idea of an exit strategy – people go into a community and bring about some kind of artwork that’s building change, and then they just leave. I’ve built a relationship with Pat that I believe will last as long as my life. He’s constantly changing and evolving; he’s just had a child. So, I think it’s important to continue to build that relationship as long as he allows me to do so.