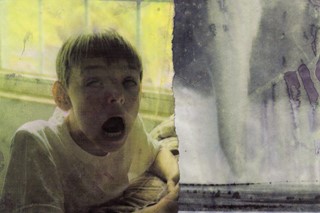 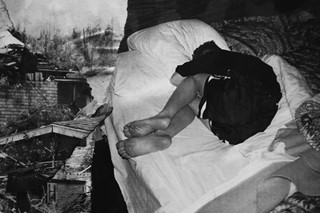 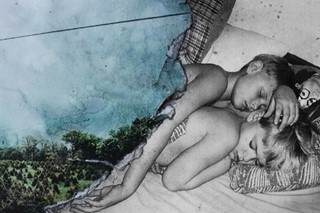 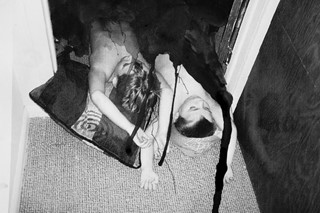 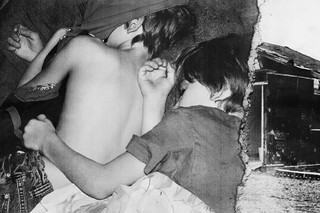 Disaster and damaged boys – that’s the jump off point for artist and Kiddiepunk publisher Michael Salerno. It’s a dark fascination but one that manifests in his disturbed and stitched together shots of young boys whose eyes are scratched at, bodies torn at and faces painted across, collaged with shots of devastated buildings and architecture. “I think a lot of this work is deeply rooted in my own childhood,” the Australian-born, Paris-based artist tells us, “so it’s hard to say exactly why these two things are fused together all the time, but I’m very interested in contrast and in the emotional charge that can be created by putting these two things together and allowing them to exist in the same space. I like the tension it creates.”

We last met Salerno when he published the third issue of his zine Teenage Satanists In Oklahoma, but his monograph Childhood, published by Infinity Land Press, is a hypnotising visual memoir of these dualities. In its foreword, written by artist Martin Bladh, are references to a young boy’s death in 1950s Philadelphia. The boy was found in a cardboard box, and the police, unable to identify him, dressed him in ‘typical children’s clothes’ and photographed him in an attempt to find his family, but he was never identified.

“Apart from the obvious absurdities which are intriguing in and of themselves, something about this boy felt really interesting to me. This nameless boy that was literally used and discarded,” Salerno explains of the book’s final pages. “I decided that I wanted to talk to him to see what he had to say, so in the appendix of Childhood we’ve included parts of my conversation with him. As the book is filled with photographs, I felt like it would be nice to let one of these children speak in actual words and have the book end on that note.”

The process in which Salerno creates is laborious; wetting the images, tearing the images; and painting the images, before photographing them as he works on them. ”I’m interested in how you can completely change the context of something by putting it next to another thing. These works are all expressions of a personal, internal space, they are representative of an inner landscape. I’m not so interested in the outside world. I’m interested in what goes on inside.”

Perhaps it’s Salerno’s view on childhood itself that might be best to give some valuable insight into such subject matter. His reflections on his own youth and the way he channels those thoughts, questions and curiosities drills deep into his artistic mindset – helping to shed some light on something that initially appears so dark. “People always say that childhood is the happiest time of your life, like it automatically implies a time of being innocent, carefree and joyful,” he explains. “Kids are kind of psychic too, I think. Information is received as energy. So, I find it ridiculous the way children are generally depicted as little more than one-dimensional and emotionally retarded. While childhood can be all of these great things, it can also be kind of suffocating, confusing and frustrating in many ways. You have no power when you're a child, you’re not in control of practically anything, therefore you’re essentially a prisoner in a lot of ways. I’m interested in all this stuff, these complexities.

We’re only happy to have children represented as cute little one-dimensional props, little totems of innocence and purity, otherwise it becomes problematic. I don’t remember feeling any different as a child than I do now as an adult. In fact, sometimes I think I felt things a lot deeper then than I do now. The older you get, the more disconnected you get in a lot of ways. It becomes easier to function, some of the mystery dissipates. Somehow, all of this ties back into the story of the discarded boy in the box for me.”