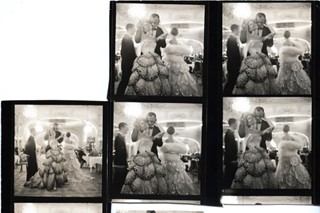 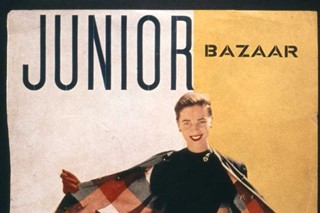 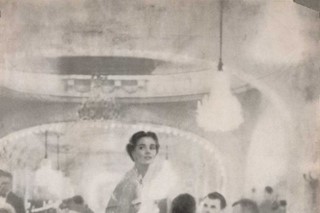 Picture this: a young woman puts away in a trunk photographs, personal letters, a few newspaper and magazine cut outs and other assorted mementos. Now imagine the trunk getting temporarily lost and then being found again many decades later by the son of that woman. Imagine also opening this treasure trove and finding quite a few images taken by one of the most famous photographers in the world, Richard Avedon, and portraying one of the most beautiful models in the world, Ann Theophane Graham, also known as “Theo”.

This story may sound a bit like a fable, but it’s exactly what happened to architect Emilio Carlo Saraceni, Theo’s son and the finder of the treasure trove that brought back to life a forgotten piece of fashion history that has become the subject of an exhibition launched during the AltaRoma event and split in two different Rome-based locations, the Capitoline Museums and the French Academy at Villa Medici.

Born in New York in 1926, Ann Theophane Graham grew up in New Jersey and, in 1940, moved back to New York. While looking for a job in the Big Apple she met Richard Avedon who was working in those years as advertising photographer for a department store. Avedon offered her a job as assistant photographer and Theo accepted. Her passion for the world of fashion was too strong, though, and soon she started working as a model for various magazines, becoming one of Avedon’s favourite models.

In the mid-to-late 40s Avedon and Theo worked together on different photo shoots for various fashion magazines, from Vogue and Mademoiselle to Harper’s Bazaar and Junior Bazaar. Some of the most beautiful photo shoots Avedon did with Theo as protagonist are from the summer of 1949 when, together with best friend and model Dorian Leigh, they went to Paris to make the haute couture photo shoots that appeared on Harper’s Bazaar in the Autumn of the same year. In that occasion Avedon took an iconic picture of Theo wearing the voluminous “Junon” dress by Christian Dior. Theo seemed to emerge out of the sumptuous layered gown like and ethereal vision, almost making disappear what surrounded her. Harper’s Bazaar editor-in-chief Carmel Snow hailed the picture as extraordinary and Theo’s star shone brighter in the fashion firmament from then on.

Theo worked with a lot of photographers, among them also Ted Croner, who became her first husband, Clifford Coffin, Frances McLaughlin, Bill Helbourne, Hermann Landshoff, Kay Bell, Joe Palumbo, Carmen Schiavone, Maria Martel and the duo Joe Leombruno/Jack Bodi (also known as Leombruno-Bodi). After Theo split from Croner in 1956, she moved to Italy where she kept on working as a model for American and Italian magazines until the mid-60s, witnessing the boom of the “made in Italy” and modelling creations by Simonetta Colonna di Cesarò, Fabiani, Capucci, Emilio Schuberth and Galitzine. In Rome, Theo met her second husband, film producer Carlo Saraceni and, in 1957, Emilio Carlo was born. Theo lived in Rome until her death in 1996.

The “Theo by Richard Avedon” retrospective features 80 images, plus signed test shots, letters, telegrams and magazines. At the Capitoline Museums visitors will be able to discover the history of Theo’s trunk from 1945 to 1951, while at the French Academy the exhibition focuses on some of the most beautiful photographs chronicling French haute couture at the end of the 40s, with Theo wearing designs by Christian Dior, Pierre Balmain, Guerlain, Lanvin, Jacques Fath and Cristòbal Balenciaga. The material for the two exhibitions was selected with the precious help of Valentina Moncada, owner of the Rome-based Moncada Gallery, daughter of model Joan Whelan and of photographer Johnny Moncada, and childhood friend of Emilio Carlo Saraceni. Valentina carried out an extensive research on the documents and photographs found by Theo’s son.
Dazed Digital: Can you tell us more about the genesis of this exhibition? Valentina Moncada: While we were working on a house renovation project together, my friend Emilio Carlo Saraceni told me that his mother had left him when she died a few trunks that contained mementos from her career as a model. His mother Theo had arrived in Rome in the mid-50s and had shared a flat with my mother Joan. Emilio also added that he was sure that among the materials there were images taken by Richard Avedon. I was struck but what he told me and so I went to see him in his flat in Via Pezzana. Here I found hundreds of images of his mother lying on the floor and Emilio had selected among them those ones he thought were by Richard Avedon. So we started getting the pieces of the puzzle together leafing through the magazines published in those years and reading the biographies of famous models such as Dorian Leigh who wrote about the journey she did to Paris with Theo in 1949.

DD: Do you thing the exhibition is instrumental in understanding Avedon’s future style?  VM: Theo met Avedon when she was 19 years old and he was 22. In a way they grew up together, living a sort of wonderful adventure. He started turning into this amazing photographer while she became the protagonist of some iconic photo shoots and the exhibition follows the development of these two careers. Avedon’s style definitely matured while he worked with Theo and these images allow the visitors to understand the creative process of one of the most important fashion photographers of our times. The retrospective features a lot of faded photographs that weren’t obviously meant to be shown in an art context, yet it’s exactly these images that allow the visitors to meet a different Richard Avedon and discover how his photographic eye worked through the images he selected and through the poses of the models inside a studio or in various locations.

DD: Which is your favourite photograph?VM: The one that portrays Theo in Christian Dior’s “Junon” dress. She looks like a swan in this picture taken in a Parisian restaurant, as she emerges with her long neck from this voluminously glamorous gown. This is Avedon’s first “swan”: in his life he portrayed many other women as if they were swans, for example Marella Agnelli ten years after this first image was taken, but this photograph is strikingly unique. Another picture I love for its sentimental value is the last image Avedon took of Theo in 1951. She’s in a station in New York and she’s hugging a man. She is obviously in love with this man she later married, photographer Ted Croner. I renamed this picture “Goodbye Theo” as, from then on, Avedon never took any further picture of the model.

DD: Do you feel this exhibition has also got a personal value for you?VM: Definitely. In a way, I felt as if destiny had made us stumble into this trunk. My gallery mainly focuses on photography, because my father transmitted his passion to me. Fashion and photography are part of my childhood, of my education, since, when I was a little child, I used to go and visit my father in his studio and see all the models dressed in the creations by important designers such as Emilio Pucci, Fabiani or Valentino. Together with Enrico Carlo I discovered some images of children’s parties that feature both of us when we were two or three years old with our mothers. I also found photographs of my father with Theo in my grandparents’ country house where I got married, so these images have a strong personal value for me and the trunk really brought back to life memories of interlinked lives.

DD: Will the exhibition go on tour?VM: We hope so and we’re working on it. We genuinely hope we will be able to take the exhibition to Paris and New York one day.

“Theo by Richard Avedon”, Musei Capitolini and Accademia di Francia, Villa Medici, Rome, until 1st March. The catalogue of the exhibition with an introduction by Emilio Carlo Saraceni and an essay by Valentina Moncada is published by AltaRoma.
Read More